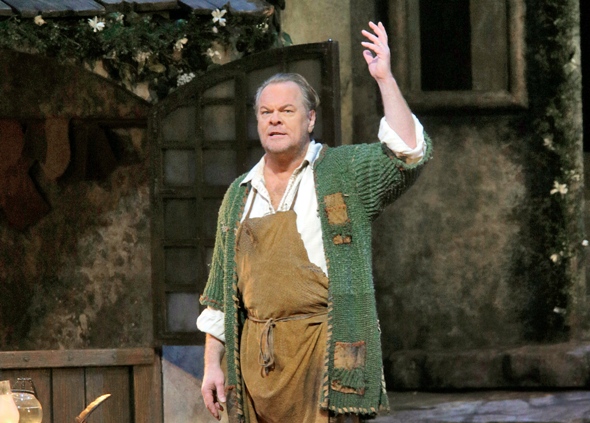 Feature review: “Die Meistersinger von Nürnberg,” by Richard Wagner, at the Metropolitan Opera with baritone Michael Volle, above, who replaced James Morris as Hans Sachs for an HD broadcast.

The Metropolitan Opera is the most international of houses, but there is something quintessentially American about the Saturday afternoon HD cinema broadcasts that are now part of its marketing arsenal.

After attending a performance of “Die Meistersinger von Nürnberg” at the Met — starring James Morris, who at 67 gave a touching and comfortably well-worn reprise of his Hans Sachs, the master shoemaker, cobbler of poems and mender of hearts — I caught the same production, broadcast live to cinemas in HD on Dec. 13, starring German baritone Michael Volle in a sneak peek of the Met’s Sachs of the future, along with Wotan and the Dutchman among the company’s reported plans for him. The occasion marked the company’s 84th Live in HD broadcast. 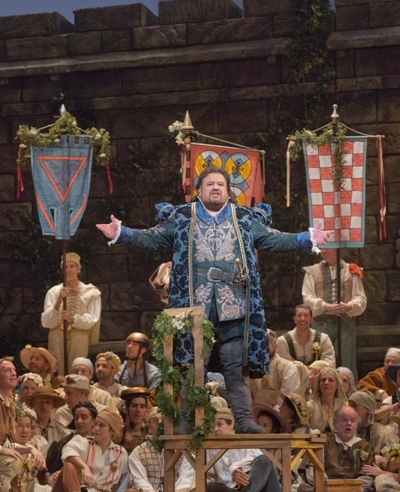 The scene at the near-northside Chicago AMC River East 21 cinema was not as crowded as usual — you have to get there an hour early for Verdi and Puccini if you want a pair of seats together — but it was filled with the familiar mix of lifelong opera lovers and young professionals in local lyric and legit theater, along with a miscellany of the curious. I stood in line at the concessions stand and listened as two people in front of me revisited the fine points of Sonya Radvanovsky’s mad scene in the Lyric Opera of Chicago’s new production, currently playing, of “Anna Bolena.” After they wandered off with their popcorn, the guy behind me, who had overheard, asked his companion, “What’s bel canto?” “It’s just Italian for beautiful singing,” she said.

“Are you ready for our close-ups?” ask the Met’s AMC ads invitingly. There was a time when many singers would have answered that one in the negative. The HD chill that went through television newsrooms in the early 2000s, threatening a premature end to the careers of respected anchors and talk show hosts, circulated through opera’s backstages, too. What passed for acceptable stage make-up, jewelry and furniture had to be reconsidered; the intimacy of film acting became as important as singing to the back row of the house. 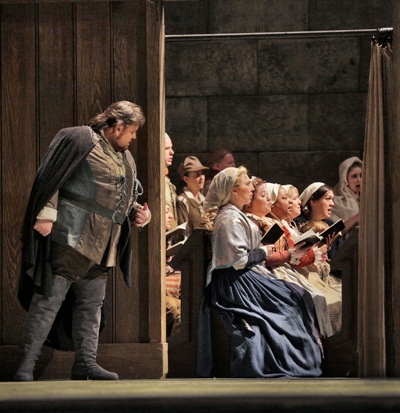 But the Met was game to try, and so were its artists and technical crews, who each year since the series’ inception in 2006 have improved upon the quality and sophistication of the HD experience. The broadcasts don’t necessarily offer the same gratifications at precisely the same moments you feel them inside the opera house; the artistic experience is different. But it is an artistic experience nonetheless, shared with others in the audience in real time, with usually excellent surround sound under a high ceiling, and the camera for a teacher, its remarkable close-ups and changes guiding both eye and ear. Sophisticated fly-on-the-wall behind the scenes stuff, often irresistible, further chips away at the foreign nature of the operatic encounter. 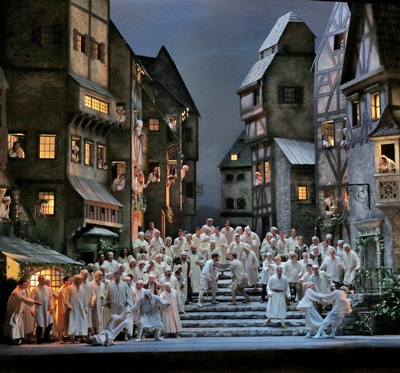 In a riveting half-hour sequence at the end of “Die Meistersinger” Act 1, which takes place at St. Katharine’s Church in midsummer Nuremberg, 1560, a hundred-person stage crew got to work as the curtain went down. The church walls were unhitched from their stabilizing wires and rolled away. The Met’s sophisticated system of stage lifts, which can alter the floor height in myriad ways, was manipulated into a three-step rise, which became the basis for a steep hill sweeping upward. The roofs and facades of narrow, multi-story Nuremburg houses were flown down and rolled in, piece by piece, then dressed and lit. It amounted to an intricate and quite entertaining construction ballet. The street would become the site of a town brawl, with the citizens in nightshirts engaging in fisticuffs up and down the hill.

During pauses the Met has become the master of the soft sell. Soprano Renée Fleming, born in smalltown Pennsylvania and disarmingly direct, was the HD host for “Meistersinger,” and her backstage segments were cleverly chosen. She wandered into the vast costume shop, where cutters were at work, to greet Broadway designer William Ivey Long. He showed Fleming nearly lifesize maquettes of the gowns that she will be wearing on New Year’s Eve when her new star vehicle, “The Merry Widow,” opens at Met. 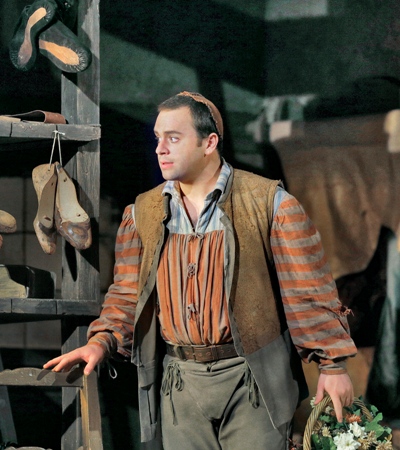 At another break, the company’s Lindemann Young Artists Development Program became the subject of a casual conversation between Fleming and the confident young tenor Paul Appleby, who plays Hans Sachs’ endearing apprentice. Appleby explained how the Met had worked him up gradually, starting with very small parts, and how music director James Levine had helped him to grapple with the apprentice’s wordy music by telling him to think of it as Lieder.

Fleming took advantage of another pause to speak with three tenors in vastly different career stages who were playing various craftsmen in the singing guild. The wide-eyed Benjamin Bliss, who played the furrier Kunz Vogelgesang, was making his Metropolitan Opera debut, but Tony Stevenson, who played the grocer Ulrich Esslinger, had done 700 performances since 1993 including wildly contrasting characters, some of which the camera showed. And Noah Baetge was not only the tailor Augustin Moler, but also an understudy for Johan Botha in the the opera’s leading tenor role. 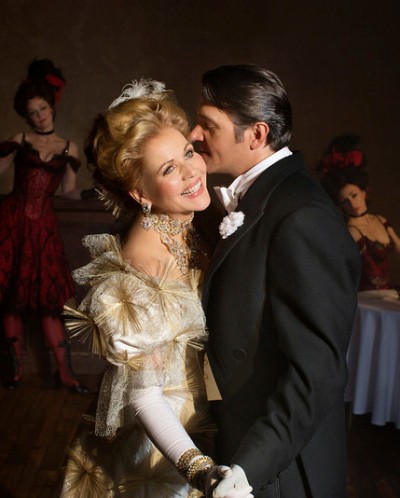 The cameras did additional message work. One swooped into the opera pit before the music started for a great view of the Transformer-like chair that allows Levine, disabled from injury, the full and vigorous use of his conducting powers (see picture below). One scanning camera rested on young faces in the audience and zoomed in on members of the racially diverse orchestra and chorus.

But at the heart of the Met’s comprehensive HD initiative are the operas themselves. This season there are nine, including five of the company’s six new productions — most of them still to be aired in 2015 and featuring a glorious A-list of the world’s singers. (“The Death of Klinghoffer,” John Adams’ opera about the highjacking of the cruise ship Achille Lauro, was pulled from the HD schedule as a result of pushback over Mideast tensions, although it was performed at the Met as scheduled.)

No other opera company is producing live video routinely at this level nor reaching an audience this wide. The Met has been doing radio broadcasts since the ’30s and has an impressive audio archive that is unrivaled; now it is building up real-time video at an impressive clip. After broadcasting in HD live to 68 countries and reaching a projected 2.5 million people this season, the Met will re-purpose some of the video for PBS television replay and for streaming online, turning the best of the lot into DVDs. The Met earned $35 million from HD broadcasts and other media in 2013. The company’s fiscal 2013 budget was $311 million.

One can still catch the replay of “Die Meistersinger,” on the evening of Wednesday, Dec. 17, in most cinemas that offer the series. It’s a charming comedy of massive length about a traveling knight, Walther von Stolzing, who falls in love with the goldsmith’s daughter Eva at first sight. He must learn the rules of the town’s singing contest overnight if he hopes to win Eva’s hand, because she is only allowed to marry a singer who has attained master status in the singing guild. Naturally, there’s a rival, the small-minded Beckmesser, who is scoring the contest. There is also a wise helper, the aging widower Sachs, who sees the knight’s raw talent and helps him forge the winning song.

Johann Botha was the smitten Walther, in one of the best roles I’ve seen him undertake at the Met. He was in glorious voice, but the wooden quality of his acting in the opening moments — forgivable from mid-house at the Met — was inescapable in HD when Walther paced alone outside the church sanctuary and tried to get Eva’s attention. Interesting, though, how the camera came to like Botha, once he had someone to interact with. In the scene with Sachs, when the two actually got down to work on a song, you could see the tenor’s self-consciousness melt away. The camera liked soprano Annette Dasch, as Eva, too. And it absolutely loved Appleby, whose chatterbox apprentice David lit up the frame. Johannes Martin Kränzle, as the peevish Beckmesser, came off as a particuarly likable loser — odd, but a real guy, not a page from a comic book.

Meanwhile, Michael Volle, flown in for just two performances, showed that he is clearly prime for the role of the middle-aged Sachs, who is bewildered by the sudden passion of the pretty goldsmith’s daughter for Walther, and is himself enchanted by what he hears in the knight’s unschooled art. Volle’s two ruminating monologues were splendid in close-up, where poetic detail matched muscular oratory. (The Met has a video of James Morris in his own prime as Sachs, recorded in December, 2001, with Ben Heppner as Walther, Karita Mattila as Eva and Thomas Allen as Beckmesser. It can be rented online for $4 and streamed for 24 hours.)

Whether the current HD broadcast is destined for DVD is yet unknown, but it certainly gets my vote: The singing is grand, the camerawork well beyond what it was in 2001, and after this run of performances, which ends Dec. 23, Otto Schenk‘s expansive, delightfully naturalistic 1993 production, with sets by Günther Schneider-Siemssen and costumes by Rolf Langenfass, will be retired.

Still to come in the Met’s Live in HD broadcast season: 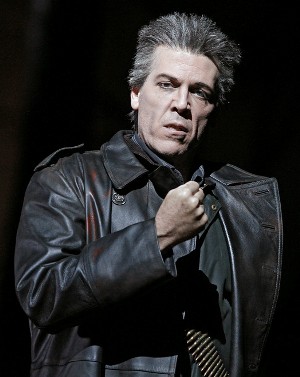 “The Merry Widow,” Lehár’s nostalgic operetta of Belle Époque seduction and romance starring Fleming as the wealthy widow Hanna, directed by Tony winner Susan Stroman (“The Producers”) in her Met debut and conducted by Andrew Davis, music director of the Lyric Opera of Chicago, with baritone Nathan Gunn as her love interest and Broadway star Kelli O’Hara (“South Pacific,” “The Light in the Piazza”) as the flirtatious Valencienne. Jan. 17, 2015.

“Iolanta” by Tchaikovsky, and “Bluebeard’s Castle” by Bartók, a dark Valentine done as an unusual double bill, inspired by film noir and directed by Mariusz Treliński, with sopranos Anna Netrebko as the blind princess Iolanta and Nadja Michael as Bluebeard’s wife, conducted by Valery Gergiev. Feb. 14.

“Cavalleria Rusticana” by Mascagni and “Pagliacci” by Leoncavallo in a new production of this celebrated double bill from the 1890s by David McVicar, with a set by Rae Smith (“War Horse”) and Fabio Luisi conducting. Marcelo Álvarez takes both of the leading tenor roles, with Eva-Maria Westbroek as Santuzza and Patricia Racette as Nedda. April 25.

Below: Levine conducting an excerpt from “Die Meistersinger,” in 2001. 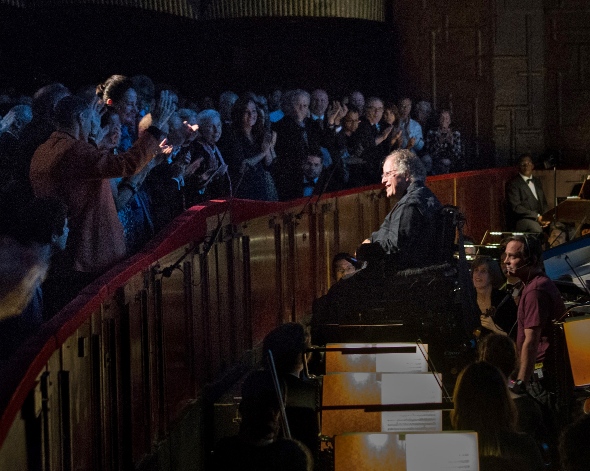