The piano recital series at Orchestra Hall has been going on for more than 70 years and has distinctive traits. On Sunday afternoons with some regularity, a keyboard-loving crowd stacks the auditorium heavily to the left, the better to see the pianist’s hands, which creates the sensation of a listing ship. You can tell by their concentration, and the sympathetic fingers in motion, that many of the observers in this ritual are pianists themselves. 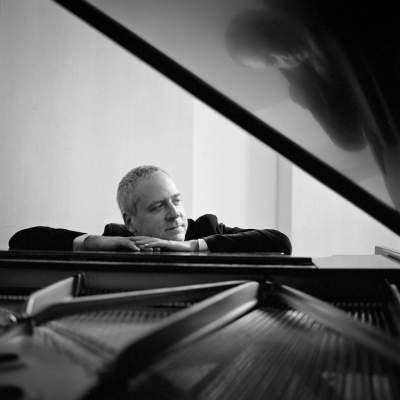 Among the delights of these gatherings is the cumulative thread of surprise, often born of a thematic coincidence in the programs the artists bring. Long ago I heard three different pianists play Beethoven’s “Hammerklavier” Sonata within the course of a year, sheer joy in the days before YouTube and the DVD, when such eye-witness comparisons were not easily possible.

The mind-blowing early treat this season has been successive Bach concerts on two October Sundays that would have left the composer himself impressed by the feats of memory and endurance on display — American pianist Jeremy Denk performing the 30 “Goldberg” Variations of 1741, the summit of Bach’s keyboard achievement, on Oct. 13, followed by Hungarian pianist András Schiff performing all six Partitas, each its own ambitious suite of six or seven parts by Bach as a younger man, in a truly herculean Oct. 27 display that lasted nearly three hours.

The pianists are both brilliant, thoughtful artists, though in individual temperament quite contrasting. Denk is 43, restlessly inquisitive and brimming with physicality. He seems to be still in the throes of fresh discovery when it comes to Bach. Not a deliberate iconoclast, really. But his world of reference includes 20th century masterworks by such as Ives and Ligeti, with whom his Bach is sometimes paired, as well as composers of his generation. With each new work, the whole of musical history is reinterpreted, it is often said, and Denk brings a certain fearlessness to that task. He’s our agent as we marvel over the complexity of Bach’s number games and the many levels of brilliance in his art, as if to muse with wonder, ‘Look how he is still the champ.’

Schiff would be the last person to tell you that Bach’s music is sacred only; he performs the dance-inspired music of the Partitas with great humor and evident joy. But at nearly 60 he is coming back around to many of Bach’s monumental works with the experience of his long career and calling, and his approach reflects less of delight and discovery than it does refinement, deepening spirituality and sophistication, and above all consolidation.

The Partita recital was one for the ages. Schiff’s complete mastery of Bach was apparent, although onstage he displayed no apparent ego. He seemed almost shy, inviting one to listen through him, rather than to him. Playing without foot pedals, he communicated with an intensity that compelled the listener to lean forward as if to partake of a rare truth, which is not to say the playing, though intimate, was less than leonine.

The tone was luminous, instantly compelling, the expression authentic, serene and reflective of deep honesty. The intellect, as well, was always evident, the governing force. Schiff moved with great precision and clarity at often rapid tempos, yet made it easy for the ear to trace the paths of Bach’s simultaneous melodic lines — easy, at least, for ears not overwhelmed.

Listening to the complete cycle of Bach’s Partitias in one sitting can be forbidding for anyone. The memory is likely to be challenged by the succession of more than 30 highly complex treatments of obscure dances such as sarabandes, allemandes, courantes, scherzos, menuets, rondeaus, gigues and gavottes, whose differences might seem unfathomable at these several centuries remove. But Schiff had thought about that as well.

He performed the suites out of chronological order, but in an order that presented an underlying logic that carried one along, starting with the brisk scalar riffs of the 5th Partita in G major, then moving through the the 3rd, 1st and 2nd Partitas in A minor, B-flat major and C minor, and finally closing with the two most expansive, and powerful, works in the set — the 4th in D major and the 6th in E minor.

One doesn’t have to know this music well to be influenced by the sense of harmonic expansion outward in Schiff’s presentation, rather like the universe unfolding. (Why is it that, with Bach, one always finds oneself talking about cosmology?) This ordering is not an experiment on Schiff’s part. He does the same thing on his recording, a worthy memento of the occasion for those who might want to go back and savor Bach’s dance-inspired ruminations, one marvelous flight at a time.