Preview: Museum of Contemporary Art Chicago will present 17 evenings of jazz, with a culinary accent. Series opens June 4 and runs through Sept. 24.

“It was 100 degrees. It was sooo hot,” he recalls with a laugh. “But we still packed in a good crowd. It’s always good. People come from everywhere.”

This year’s summer-long lineup of 17 concerts featuring Chicago jazz musicians, all free to Illinois residents, kicks off June 4 with trumpeter Corey Wilkes and friends. And while the jazz will cook, the air temperature should be nowhere near triple digits. 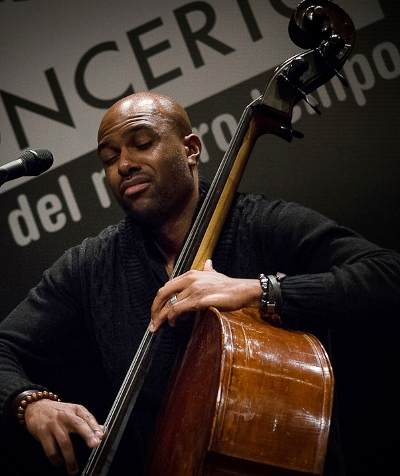 Variety spices Tuesdays on the Terrace. Ellis is one of the grand old-timers of Chicago jazz, known for his golden tone and playing that exudes an emotional edge. The veteran cellist Lonberg-Holm brings an eclectic style and a reputation for creative improv. Alexander, a fearless singer, works freely across a range of more than three octaves.

Junius Paul, who has played MCA’s summer series numerous times as both sideman and leader, is slotted this year for a perfect Tuesday in September. (He’s counting on it.) A self-described devotee of music if all its forms, from funk to bop to classical, Paul says the terrace scene inspires variety.

“You get such a mix of people, from children and young adults to the elderly. So I try to bring something everybody can enjoy, but at the same time that’s creative and challenging,” he says. “It’s more than just notes on the terrace – it’s an experience. Music is a spiritual thing. What really matters is the connection.

“Jazz comes from the blues, which has its roots in the spiritual music of Africa. Those are my ancestors. Like any oral tradition, jazz is handed down from generation to generation, and every generation adds something to it. I grew up listening to Stevie Wonder, and I played in rock bands. 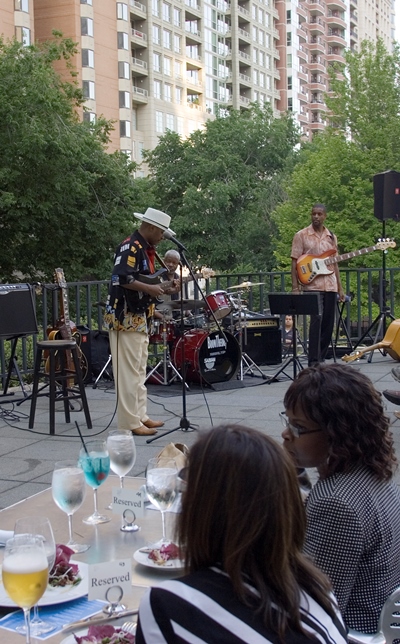 “I was raised that way. My father was a DJ and my mom was a musician. I had a very diverse musical upbringing – the Beach Boys, Jimmy Hendrix, Thelonious, Miles, classical, easy listening. It all goes into everything I play.  You put your life experiences into your music, too. I still play in church every Sunday.”

The vitality of Chicago jazz has been showcased on the MCA terrace – actually a bi-level terrace and sprawling green area for picnickers – for more than a decade. Over the course of each summer, the series draws some 15,000 jazz buffs, notes MCA’s director of visitor services, Amy Corle. That cumulative turnout qualifies Tuesdays on the Terrace as one of Chicago’s premier jazz events.

“It’s a community of people who come,” says Corle. “Regulars who have returned for years are friends now. We’re a tourist destination. We’ve had groups from France and Italy.

“What’s not to love about sitting outside in a lovely setting near the lake, listening to free concerts by some of the most amazing musicians. It’s also a great opportunity for exposure to new expressions in jazz.” 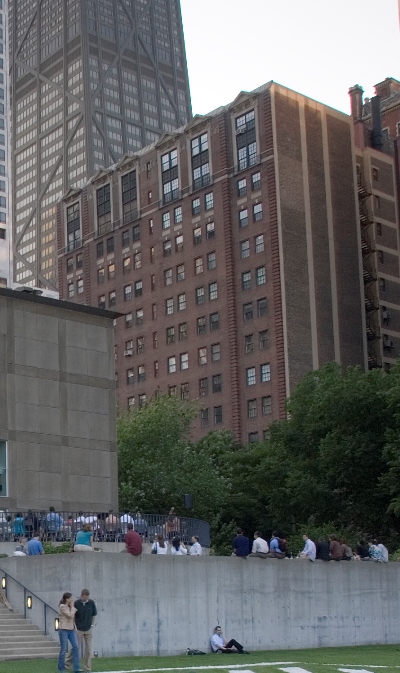 A distinctive bonus of Tuesdays on the Terrace is the cuisine – food seems too humble a word – served up by the museum’s resident Wolfgang Puck Café. The upper terrace offers Puck’s buffet with table seating for $25 per person, or on the lower level and grounds you can get a burger or bratwurst grilled to order while you watch.

Executive chef Corey Fuller accents each Tuesday evening’s fare with produce acquired during the day from the farmer’s market on the MCA’s front plaza.

Upper terrace table seating is limited and reservations are recommended. Call (312) 397-4034. Outside food and drinks are not permitted on the grounds, through visitors are welcome to bring a blanket for picnicking. Folding chairs can be rented for $5. Visitors from outside Illinois will be admitted to Tuesdays on the Terrace for the basic MCA admission charge: $12 for adults, $7 for students and seniors. Children 12 and under are admitted free. Concerts begin at 5:30 p.m. and end at 8 p.m.

Photo captions and credits: Home page and top: The Curtis Robinson Trio performed in the Museum of Contemporary Art’s Tuesdays on the Terrace series. (Photo by Justin Wambold) Descending: Bassist Junius Paul (Photo by Mariagrazia Giove) Cool drinks with cool jazz on the MCA terrace. Green space in an urban setting frames the MCA’s jazz on the terrace series. (Photos by Justin Wambold)