What a pleasure it was Thursday night to hear Handel’s vivacious “Water Music” in the hands of a conductor who knows it so intimately that he doesn’t require a score – and who understands what charms it possesses that induced a delighted monarch to command repeated performances at its first hearing.

Bernard Labadie drew this beguiling account not from an ensemble of specialists playing on gut-strung fiddles and valveless horns but rather from the virtuosi of the thoroughly modern Chicago Symphony Orchestra.

Some modern-day Baroque zealots insist that only by draining the blood from 18th century music can one have an authentic experience. Labadie made it abundantly clear that the lasting appeal of a work like the “Water Music” resides now – as it did when these suites were new in 1717 – in the skill, imagination and esprit of the performers. 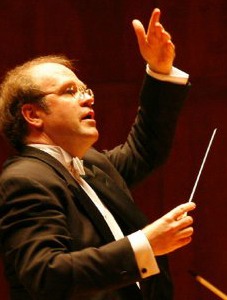 Handel composed what we’ve come to know as the “Water Music” for a royal float down the Thames by England’s King George I and his courtiers, who occupied several barges. The enchanted monarch insisted that Handel’s men reprise, on the spot, the lengthy sequence of gentle airs and popular dances such as the bourrée, hornpipe, minuet and rigaudon. The music was soon published and quickly won public favor that has endured for nearly three centuries. Labadie’s animated, expressively indulgent interpretation captured the essence of why the “Water Music” has streamed merrily down through the generations.

Though a prominent authority on Baroque stye, Labadie is an undemonstrative leader who imbues his music-making with as much heart as expertise. He’s the founding music director of two marvelous ensembles in Québec, Les Violons du Roy and the chamber choir La Chapelle de Québec. In a few rehearsals he managed to transform a chamber-size version of the Chicago Symphony into a committed, smartly stylish Baroque troupe.

In this standard “complete” version, the “Water Music” consists of three arbitrarily assembled suites of uneven lengths – a total of 22 movements lasting nearly an hour. Labadie’s red-blooded reading showed off the CSO’s technical precision even as it allowed the musicians to have gleeful fun with phrases that swooped, rhythms that kicked and lusty fanfares that found pairs of horns and trumpets trading salvoes.  The CSO’s compact string choir made the familiar dances spring and polished the contrasting airs to a deep luster. It was a gratifying reminder that “authenticity” begins where time and soul converge.

Labadie opened this all-Handel program by taking the CSO into truly rare territory with two organ concertos from the six works grouped as the composer’s Op. 4 – the No. 1 in G minor and the No. 4 in F major. The soloist, Richard Paré, is a founding member of Labadie’s Violons du Roy as resident harpsichordist. Indeed, he provided elegant harpsichord continuo for the “Water Music.”

While reflecting Handel’s own celebrated virtuosity as an organist, the concertos also typify the composer’s technical finesse and his sense – demonstrated everywhere in “Messiah” – of how much more can be achieved with a bit less. Which is to say these two concertos, with strings alone for accompaniment, were as notable for the delicacy and sparkle of the organ part as for its bravura qualities. Paré tossed off his assigned with the same assurance, the same patrician ease that Labadie would bring to the “Water Music.”