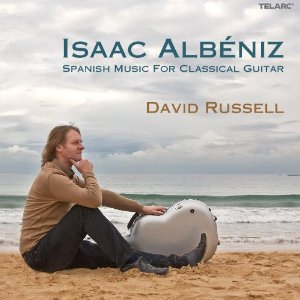 The Scottish guitarist David Russell got my attention a few years back with a CD of Renaissance music that included some very fine readings of works by John Dowland. That same technical finesse and artful musicianship grace this wide-ranging collection of pieces by Isaac Albeniz. It takes in a range from the popular  and soul-stirring “Granada” to less familiar but none the less evocative selections like “Cádiz” and “Rumores de la Caleta.” While Russell is capable of dazzling virtuosic display, he’s also temperamentally disposed to the kind of patience and restraint that bespeak deep understanding of the music at hand, indeed a spiritual connection. His account of the mystical and brilliant “Córdoba” – at just over six minutes the longest item on this album of miniatures — offers an excellent illustration of Russell’s many appealing qualities as a guitarist and musician. His ruminative opening to “Córdoba” has an almost prayerful aspect of deliberation, full of pointillistic effects, only to break into a sparkling melodic flow rich in ornamentation and resonant inner voicings. This is tone painting in the most masterful sense. ***** – Lawrence B. Johnson