‘A Disappearing Number’ at TimeLine: Infinity as starting point in a story of incalculable love 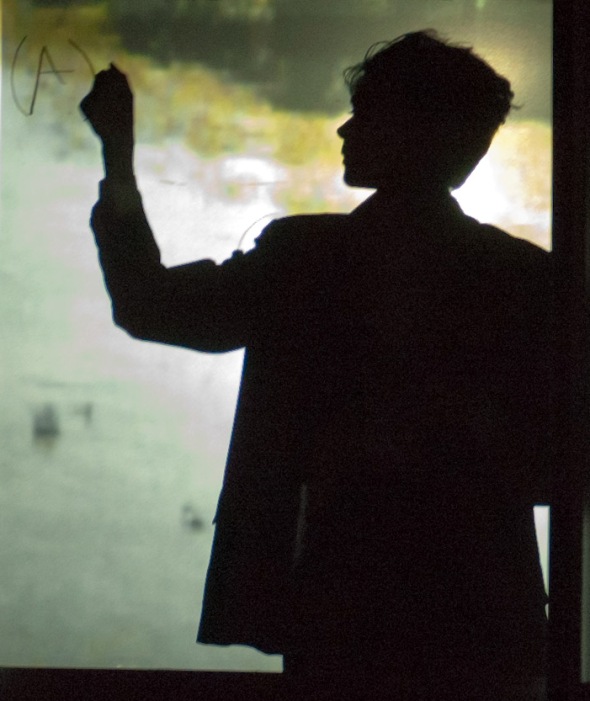 Review: “A Disappearing Number,” by Simon McBurney and Complicite, at Timeline Theatre through April 9. ★★★★

Who are the rare humans able to unlock secret patterns of the universe, sharing their discoveries as music, science, mathematics or metaphor? You might think of Michelangelo or Bach. Copernicus or Newton. Shakespeare. Einstein.

If this name stopped you, then you’re a candidate for TimeLine’s fascinating romance “A Disappearing Number.” And if the name does ring a bell, it’s probably because of “Good Will Hunting,” the film starring Matt Damon as a blue-collar Boston Southie whose unlikely genius is compared to the impoverished Brahmin mathematician Srinivas Ramanujan, born in 1887. 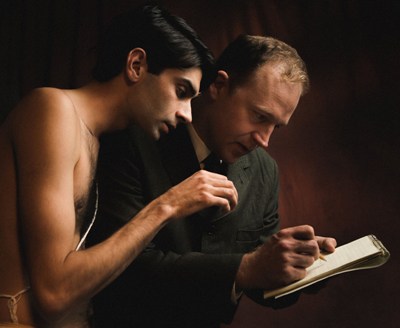 “A Disappearing Number” is derived from the true story of the Indian school dropout who was nurtured and befriended by Cambridge professor G. H. Hardy. At age 23, the self-taught Ramanujan sent Hardy a letter filled with startling, counter-intuitive findings, and he later traveled at Hardy’s invitation to Cambridge where he delivered reams of insights into the behavior of mathematical processes as they stretch to infinity.

Ramanujan was dead at 33, a briefer candle than even Mozart, yet his influence shaped a century of thinking about the connected nature of the universe and its interrelated infinities. Also like Mozart, Ramanujan said he often saw his solutions whole, arrived at by intuition. Hardy, who abhorred ugliness in mathematics, considered Ramanujan’s writings to be surpassingly beautiful. 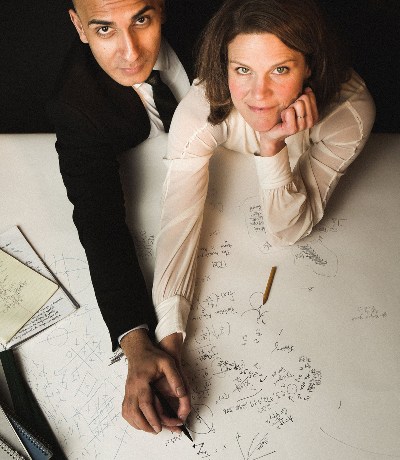 So how do you make a play about all this? The answer is a must-see and not just for math buffs or precocious scholars. It echoes the impact of Timeline’s 2012 hit “33 Variations” by Moisés Kaufman, which brought to life Beethoven’s obsession with a trivial little waltz tune he expanded into a masterpiece. Nick Bowling directed both productions. Clever mirage techniques, a splash of romance, and narrative tricks with time and space all play their parts as excellent Chicago casts helped audiences revel in the excitement of discoveries that outpace a layman’s ability to comprehend.

Or as Ruth, a math professor (Juliet Hart in a lovely performance) explains: “We may not know quite what we mean by a beautiful poem, but that does not prevent us from recognising one when we read it.” Ruth later delivers one of the most touching farewells to a loved one in the history of theater.

“A Disappearing Number” was first conceived and directed in 2007 by Simon McBurney – a founder of the London-based collaborative Théâtre de Complicité (now called Complicite) – and it toured Europe and the U.S. in 2010, getting as close to Chicago as Ann Arbor. Dizzying, disorienting, heady experiences are Complicite’s stock in trade: McBurney’s latest show, “Encounter, “ explored the sensory experience of a man lost in the Brazilian rain forest. 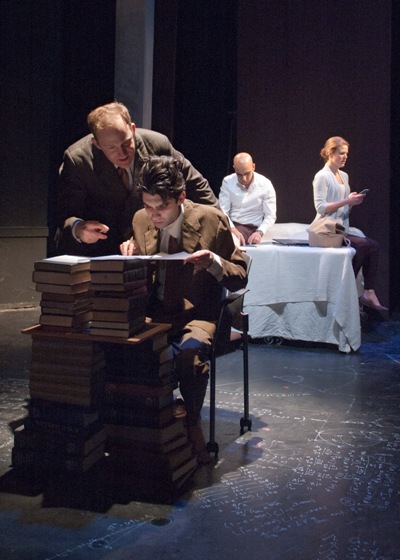 “A Disappearing Number” weaves the improbable saga of Ramanujan (Siddhartha Rajan) and his intellectual champion G.H. Hardy (Dennis William Grimes) into the contemporary romance of math professor Ruth and Al Cooper, whom she marries. Al is a Baltimore-born futures trader of Indian descent (Kareem Bandealy), clueless about Ruth’s esoteric field, and thus our proxy; Al gets to ask the dumb questions that are on the tips of our own tongues.

Bandealy’s appealing Al explodes the play’s dimensions as he stumbles after Ruth, who has died pursuing research of Ramanujan in India. Tracing Ruth’s final footsteps, Bandealy ranges from darkly comedic exchanges with a Bangalore-based British Telecommunications representative (musical-voiced Arya Daire) — in an attempt to keep Ruth’s cellphone account — to a deeply moving epiphany that pulls together the story’s elusive strings.

Meanwhile, quick scene changes collapse time and space to reveal the rest of the multidimensional tale, filled in by TimeLine’s tightly knit ensemble cast. A letter from Ramanujan arrives at Hardy’s desk: “Please do not think me mad if I state that 1 + 2 + 3 + 4 and so on to infinity is equal to minus one-twelfth… ” (yes, really). Rajan, a recent Roosevelt University graduate, was charming in his TimeLine debut as the graceful, impoverished Ramanujan, sparely clothed in a dhoti, his hair in the kudumi knot, blazing in math yet undone by a physical frailty unequal to English weather. 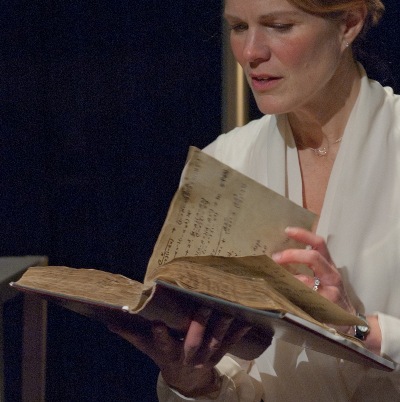 Often Cambridge professors are portrayed as quirky old men, but Dennis William Grimes gave us Hardy as an aggressive intellectual in the thrall of great ideas, fitting for a successful scholar not yet 40. Anish Jethmalani took the revelatory supporting role of Aninda, an Indian physicist of the present day whose work in string theory was strongly influenced by Ramanujan; wisdom about life’s symmetries flowed from Jethmalani’s lips in an amiable stream. And one of my favorite moments in the play was delivered by Anu Bhatt in a clever doff of the cap to “Good Will Hunting.” She plays a cheeky janitor who comes upon Ruth’s chalkboard after class, and – well, we won’t go there.

There is quite the recent tradition of successful Chicago productions that delve into the virtuosic mind, among them Peter Shaffer’s “Amadeus” at Chicago Shakespeare, David Auburn’s “Proof” at Court, Tom Stoppard’s “Arcadia” at Writers, and Simon Stephens’ “The Curious incident of the Dog in the Nighttime” presented on tour by Broadway in Chicago. “A Disappearing Number” is worthy of inclusion for the elegance with which it conveys the miracle of Ramanujan’s breakthroughs, the essential gist and the critical why, without the failing of incomprehensible detail. William Boles designed a spare set infused with light and number — the floor was a carpet of equations. Visual projections (Rasean Davonte Johnson) suggested the shifting dissolves of time and place. 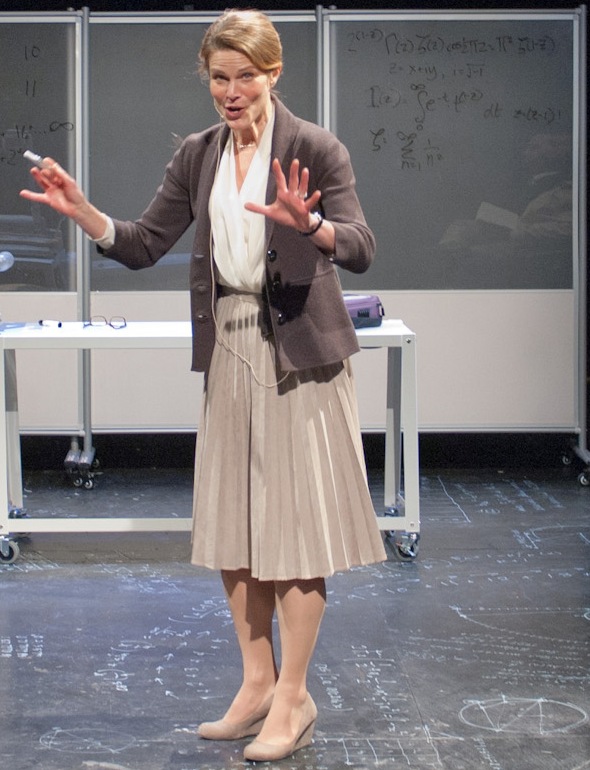