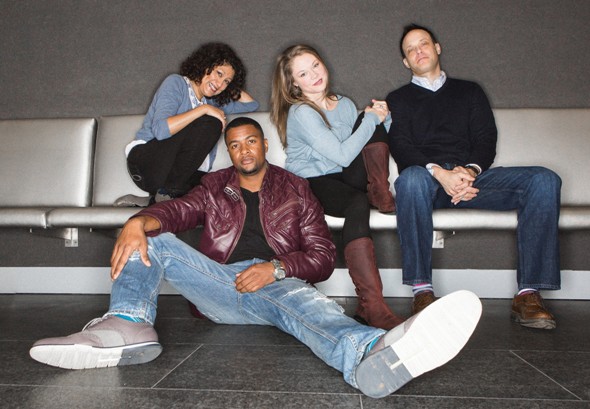 “I am proud to announce Court Theatre’s 62nd season of producing fresh, vibrant takes on the classics in Hyde Park,” comments Artistic Director Charles Newell. “To open the season, Court will produce the world premiere of “Man in the Ring,” a searing new play by Tony Award- and Pulitzer Prize-winning playwright Michael Cristofer. I look forward to bringing this powerful and moving new work about the life of boxer Emile Griffith to Court’s stage as its director. Next, Court will conclude our three-year Greek Cycle with Sophocles’ “Electra” and conclude our exploration of the poetic and violent world of ancient tragedy. We will welcome back Seret Scott to direct this translation by our Founding Artistic Director, Nicholas Rudall, following her exceptional direction of Court’s Native Son in 2014. Ron OJ Parson will then return to direct “Blues for an Alabama Sky” by Pearl Cleage, a lyrical play about the Harlem Renaissance with themes that will deeply resonate with audiences today. Following “Blues for an Alabama Sky,” I am honored to direct the Midwest premiere of Tom Stoppard’s newest work, “The Hard Problem.” We are excited that Stoppard has entrusted this stunning new script to Court. Finally, our season will close with a revival of Mary Chase’s “Harvey,” a classic play about a man and his mysterious best friend. I am thrilled that Devon de Mayo will make her Court Theatre directorial debut to direct this Pulitzer Prize-winning comedy.”

Based on the true story of six-time world champion boxer Emile Griffith, “Man in the Ring” charts Emile’s humble beginnings in the U.S. Virgin Islands to his infamous match against his archrival Benny “Kid” Paret. When Benny challenges Emile’s sexual identity, Griffith responds in the ring and leaves a mark that lingers long after their legendary encounter. “Man in the Ring” is a story of violence, love, and life under the public eye—and one man’s fight to get the world back in his corner.

“Man in the Ring” is written by playwright Michael Cristofer, who received the Pulitzer Prize for Drama and the Tony Award for Best Play for The Shadow Box in 1977. The play is brought to Court Theatre under the thoughtful direction of Artistic Director Charles Newell and features Kamal Angelo Bolden.

Proclaiming justice, Clytemnestra and her lover Aegisthus murdered her husband, Agamemnon, after his triumphant return from the Trojan War. Now, many long, quiet years have passed and she cannot anticipate the judgments that will soon arrive in Argos. Her vengeful daughter Electra and son Orestes reunite and scheme to confront their mother—upholding the House of Atreus’ eternal mission to balance the scales, they seek to reclaim their father’s throne.

Translated by renowned scholar and Founding Artistic Director Nicholas Rudall at Court Theatre, “Electra” presents the third and final tragic chapter of Court’s groundbreaking Greek Cycle. “Electra” is directed by Seret Scott, who is welcomed back to Court following her incredibly successful direction of Native Son in 2014. Returning actors Sandra Marquez (Clytemnestra) and Michael Pogue (Aegisthus) are joined by Kate Fry (Electra) to conclude the epic family story of vengeance and justice.

In the midst of the Great Depression, the creative spirit of New York’s Harlem Renaissance struggles with harsher realities. Angel and Guy, emerging artists with grand dreams, live next door to the more serious and political Delia, a social worker with the goal to open a community family planning clinic. Each must face their own hardships head on, but always with hope for a better life close at hand. They search for a way to keep their dreams of love, career, and service alive in times of economic despair, and they learn that the Great Depression can’t destroy the source of their creative spirit.

Playwright Pearl Cleage’s striking story encounters very modern problems in a fantastically lively 1920s Harlem. Court Resident Artist and Director Ron OJ Parson will dive into this world to illuminate the characters’ intersecting lives and experiences on stage. “Blues for an Alabama Sky” will serve as the centerpiece for a Chicago celebration of the music, art, language, and impact of the Harlem Renaissance.

Court Theatre is proud to bring award-winning and renowned playwright Tom Stoppard’s highly-anticipated new play to Chicago. His new work introduces Hilary, a young psychologist working at the prestigious Krohl Institute for Brain Science. She struggles to bear the burden of her regrets as she works through a troubling issue in her research. Where does our biology end and our personhood begin? If there is nothing but matter, what is consciousness? Will the computer someday answer all questions psychology can ask? This “hard problem” sets Hilary at odds with her colleagues, but she prays for a miracle to lead her to the solutions.

Elwood P. Dowd is a pleasant man with a unique friend, Harvey—who happens to be an invisible, six-foot, three-inch tall rabbit. Elwood embraces Harvey in his life and introduces him to everyone he meets, thoroughly embarrassing his social-climbing sister, Veta. Questioning his sanity, she decides to have him committed to a sanitarium, but nothing goes quite according to plan. The search is on for the mild-mannered Elwood and his unseen companion.

Starring Timothy Edward Kane (who’s also starring in Court’s “One Man, Two Guvnors” in May 2016)  and directed by Devon de Mayo, “Harvey” is a celebrated classic and Pulitzer Prize-winning comedy.

Subscription Information
Five, four, and three play subscriptions to Court’s 2016/17 season range from $90 to $280 and are on sale now. To purchase a subscription or to receive more information, call the Court Theatre Box Office at (773) 753-4472, or visit Court’s website at www.CourtTheatre.org. Individual tickets for all shows will be available on August 1st. Groups of 10 or more may reserve tickets by calling Groups Manager Shelby Krick at (773) 834-3243.