‘Blues for an Alabama Sky’ at Court: Rebirth comes fraught with grief, pain in 1930 Harlem Review: “Blues for an Alabama Sky” by Pearl Cleage, at Court Theatre through Feb. 12. ★★★★

In part, in an almost paradoxical way, Pearl Cleage’s play “Blues for an Alabama Sky” is about the idealistic, short-lived Harlem Renaissance of the 1920s. But what makes Cleage’s drama – and Court Theatre’s current production brilliantly directed by Ron OJ Parson – so compelling is not that brief shining vision of a better America for black people through creative achievement, a concept that fractured when the stock market came crashing down in 1929. Rather, the magnetism lies in the story’s humanity, in the tragic flaws and the upward determination of characters making their way along the streets of daily life. 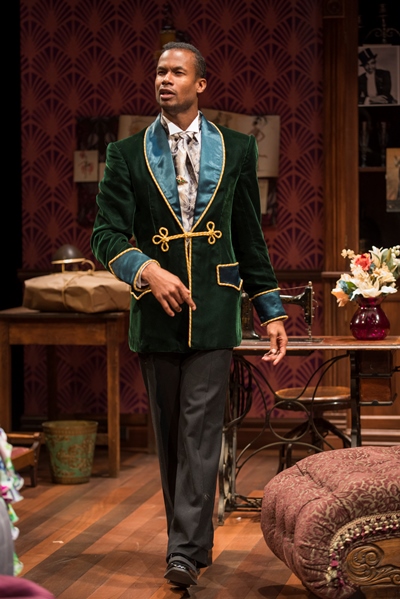 A narrative tour de force, “Blues for an Alabama Sky” unfolds through multiple story lines all building toward twin endings of recycled misery on the one hand and bright new hope on the other.

What the Alabama sky has to do with a story set in Harlem we discover soon enough, when the thoroughly plastered chanteuse Angel is being scooped up the steps to her apartment by her roommate Guy – and a stranger comes along to help. It’s a serendipitous moment that will change all their lives.

The good Samaritan is Leland, a young man with a big smile recently arrived from Alabama. The kindness and the smile are just the way Leland is; in actuality, he has left ’Bama, its rural certitude and its starry night skies to put distance between himself and the loss of his young wife, who died in child-birth, and their child with her.

Angel (brought to sensual, impulsive, desperate life by Toya Turner) is drunk for a reason, though pretty much any excuse can propel her to Guy’s liquor cabinet. She’s just been fired from her singing gig at a nightclub after mouthing off to the wrong person. And this is 1930, some months after the crash, which means jobs for blues singers, as for everyone else, have grown scarce. But Guy (Sean Parris in a performance of elegance, edge and mordant wit) will shelter his ever-needy pal Angel as he has done for as long as either of them can remember. They are not lovers. Indeed, Angel asks Guy if the idea hasn’t occurred to him. He mulls the question for a moment, then answers flatly, “No.” Angel doesn’t laugh, but the audience roars.

Guy is gay. He keeps body and soul (and Angel) together by designing clothes; and he is a walking advertisement for the finesse of his work. (Costumer Rachel Healy’s creations are an all-around asset.) By some hook, Guy has a long-distance connection to the fabulous singer and dancer Josephine Baker in Paris. He keeps a poster of her on the wall, and talks endlessly of the day the great star will send for him to become her resident clothier. Angel pretends to share his vision, but now that she’s out of work her dreams are more realistic than glamorous: She would settle for an audition.

One apartment down from the gay guy (who flaunts his orientation at a time when it could be perilous to do so) and the boozy gal lives prim, pretty Delia (Celeste M. Cooper), an aggressive advocate of planned parenthood who sees controlling child-birth as a way for black people to improve their lives and options. Cooper’s youthful, optimistic Delia is a sweet soul and true friend to the odd couple next door. (The adjacent apartments and exterior façade are the evocative work of designer Linda Buchanon.) And friend to all of them is Sam (James Vincent Meredith), a doctor graying at 40 whose long hours are devoted substantially to delivering those children whose lives Delia would prevent. But Sam is OK with that. Better than OK. Meredith’s doc, weary and gentle and accommodating, has an eye for this petite radical. Yet even when he makes it across the threshold of Delia’s bedroom, he honors the slight opening she preserves at the door. This is a mating dance of soul mates. All the greater the coming catastrophe.

Then there’s that other match, or rather the mismatch of the ever-careening Angel and the straight-shooter Leland, played with homespun candor and disarming directness by Geno Walker. As Leland presses this Harlem hottie to marry him – insisting that she reminds him of his late wife – Angel begins to see the solid innocent as a sure meal ticket. Maybe it would work. On every side, things are coming together now; the puzzle pieces falling into place.

Until there’s one piece too many. Angel no sooner grabs one option than another, far more appealing, presents itself. This is her shot. The choice is easy; the consequences shattering.