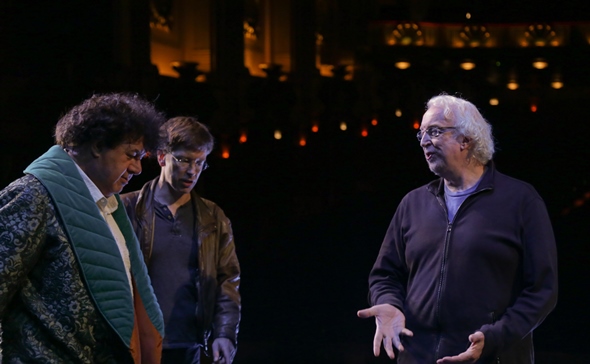 Interview: In an exclusive conversation with Chicago On the Aisle, the Goodman Theatre’s artistic director shares his vision for “Don Giovanni,” which runs Sept. 27-Oct. 29 at Lyric Opera of Chicago.

Robert Falls knows a complicated stage character when he sees one, and standing in front of him at the moment is no less intricate a figure than Mozart’s lady killer, Don Giovanni.

Actually, notes Falls, artistic director at Goodman Theatre and stage director for the Lyric Opera’s season-opening production of “Don Giovanni,” it’s a different sort of killing that brings this prince of philanderers to his horrific end. 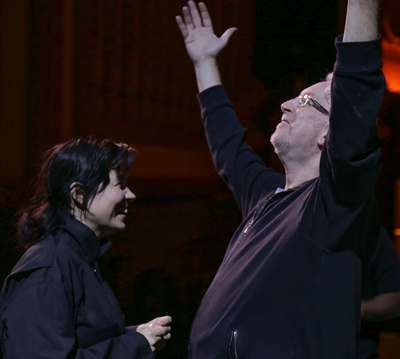 “He has seduced thousands of women, but he goes to hell because he murdered a man,” says Falls “He didn’t have to murder him. It’s as if he wants to see what it would feel like to watch a man die. It doesn’t feel like much. But Don Giovanni knows this will anger whatever gods may be, and indeed it hastens his doom.”

Mozart’s dark comedy is Falls’ third assignment at the Lyric, after Carlisle Floyd’s “Susanna” and Gian Carlo Menotti’s “The Consul.” But “Don Giovanni,” he says, has taken him to a new place.

“In Mozart, we’re dealing with a supreme genius, like Shakespeare, who understood the human condition profoundly,” says the director. “‘Don Giovanni’ is comic but it’s also deeply personal and painful, an intense examination into humanity in all its desires, darkness and cruelty. 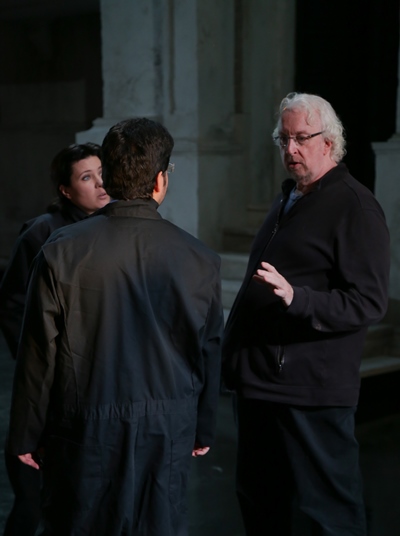 “Essentially, it’s a stage play heightened by great music. To me, it’s a speeding train of theatricality that goes like a bat out of hell. It’s also a reminder that both Mozart and Shakespeare were just two guys who wrote for pay, and in their work you’re always aware of the human hand. ‘Don Giovanni’ dog-paddles a bit in the second act, but that can be true of Shakespeare as well. We bow to genius. What’s wonderful about being a director is feeling where the seams are and pulling all the dramatic elements together. George Bernard Shaw called ‘Don Giovanni’ the perfect opera. I understand that. It’s such a perfect theatrical expression.”

Falls has updated the opera’s Spanish setting from the 18th century to  the 1920s, the time between World War I and Franco’s fascist regime.

“I feel I do my best work, whether it’s Shakespeare or Molière, when I bring a piece closer to the modern audience’s life experience,” says Falls. “Mozart knew nothing about Spain. He’d never been there. He was writing about contemporary Austrian life and loves.The Lyric has revisited ‘Don Giovanni’ about once every decade and it’s always been set in the 18th century. I felt it was time for a change.” 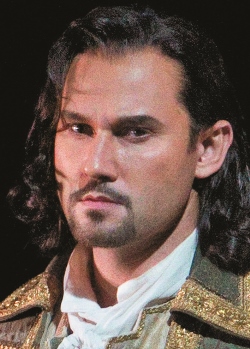 The director doesn’t make the Shakespeare connection lightly. Indeed, with a nod to Lorenzo Da Ponte’s artful libretto, Falls likened Don Giovanni (to be sung by baritone Mariusz Kwiecien) to the psychologically complex character of Hamlet – as opposed to the appealingly evil but ultimately simpler Richard III.

“From the beginning, we see Richard III as a psychopathic murderer,” he says. “He tells you right up front what he’s going to do. He’s constantly talking to the audience, explaining his chess game. Don Giovanni has no soliloquy. He never tells us anything. There’s the same mystery about him that we see in Hamlet. ‘Richard III’ is not a very deep play, but ‘Hamlet’ is a real work of art, filled with ambiguity, and that’s true of ‘Don Giovanni’ as well.

“If you play Don Giovanni as a romantic cad or a rake, it just doesn’t work. He’s wildly attractive with extraordinary charisma, but he’s also a hollow shell with a core of evil, narcissism and sadism. He wants to humiliate everyone around him – a fairly loathsome character for me, but very complex.” 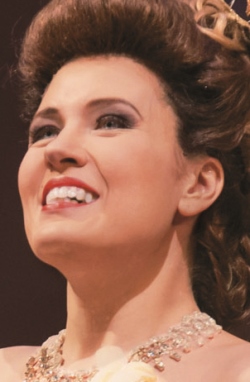 The the prism through which we view that fraught personality is formed by the vivid characters around Don Giovanni, starting with Donna Anna (soprano Marina Rebeka), the noble woman from whose home (and bed) Don Giovanni is fleeing, pursed by her father the Commendatore, as the curtain rises. The rest of the opera turns about Donna Anna’s dogged pursuit of her assailant, whose identity she doesn’t know.

“Donna Anna is in a moral dilemma,” says Falls. “She wasn’t actually raped by Don Giovanni, but she has been sexually excited for the first time. She’s a woman of her repressed Spanish culture, and now her feelings of guilt are exacerbated by the death of her father at Don Giovanni’s hands.”

Also hot on Don Giovanni’s trail is the more worldly Donna Elvira (soprano Ana María Martínez), who has tracked him from another town. Falls sees Elvira not only as Giovanni’s match but also as the one woman who has elicited real words of commitment from him – even if he thought better of it a day or two later. 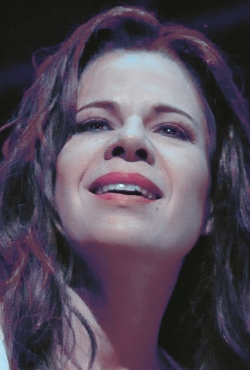 “She’s a very modern figure,” says Falls. “Donna Elvira could be out of a Woody Allen film. She’s often played as a comic device, but she’s really masochistic and co-dependent, one of those women who marry an abusive man and can’t get away. But one of the reasons Giovanni is so wretched is that he actually feels something for Elvira. And she’s constantly in his face.”

In this play packed with wonderful characters, the consensus favorite well may be Leporello (bass-baritone Kyle Ketelsen), servant and cynical accomplice to the bed-hopping Giovanni. The womanizing doesn’t bother Leporello so much, says Falls. But Don Giovanni’s casual murder of the Commendatore overwhelms the servant’s moral tolerance.

“Leporello is shocked to his core,” says Falls. “By now he has come to identify with all the women Don Giovanni has abused. He even says of Giovanni at one point, ‘He took my innocence away.’ But he can’t bring himself to leave. He’s weak, cowardly, one step away from going to hell himself. It’s the old lure of sex, drugs and rock and roll. The money is too attractive. 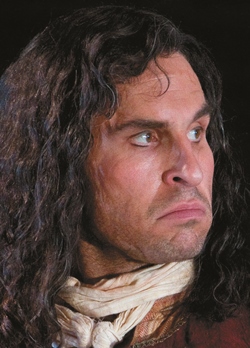 “In the Catalog Aria, where Leporello reads to Elvira his accounting of all the women Giovanni has had in various countries, he’s sharing his complicity in it all and warning her away. He says Giovanni’s favorites are the young ones – which means Leporello has been a procurer of underage children for Giovanni’s sexual pleasure. In that moment, he is filled with self-loathing.”

Why Don Giovanni has devoted his life to sexual conquest is a question that has fascinated generations of opera lovers. It intrigues Falls and this productions star singer as well.

“Mariusz and I have discussed this a lot,” says the director. “Don Giovanni is psychologically closed off, masked. The only time that mask comes down a bit is in the mandolin aria. This beautiful serenade — which perhaps he learned at his mother’s knee — is the only moment he has alone on stage to show something of himself.

“We both see within him a loneliness and despair that he can’t bear. He has to cover it up again to continue. Some deep scarring has taken place. There are monsters among us.” 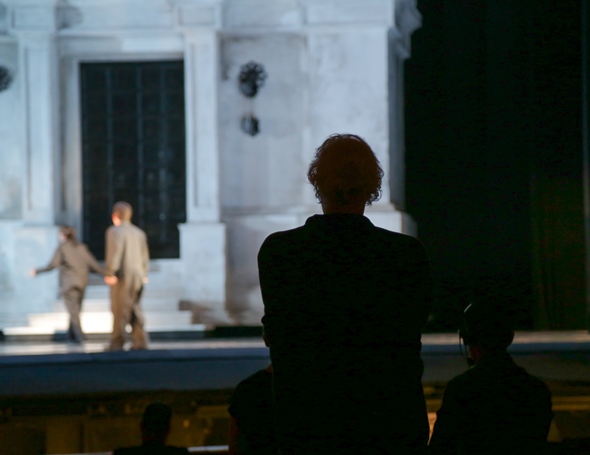