Review: “La Clemenza di Tito,” by Mozart, at the Lyric Opera of Chicago through March 23. ★★★

Had Mozart lived into his seventies like Handel, it’s tempting to suppose he might have found other uses for the profoundly beautiful arias, duets and trios in “La Clemenza di Tito” (The Clemency of Titus). Handel recycled numbers into his newer works all the time, and quite successfully, as anyone who knows “Messiah” eventually discovers.

But Mozart died in 1791 just months after writing “Clemenza,” about the first-century Roman emperor Titus and his struggle to rule with generosity of spirit. The music remains largely unknown. Performances are still a rarity, in part because of the fingerprints of an older, less fashionable dramatic structure; a 1734 Metastasio libretto, from more than a half century before Mozart’s time, forms its basis. Mozart had the libretto adapted to suit his cutting-edge musical needs for more ensembles and continuously building action, as in the thrilling first act finale. But the plot, which is maddening, operates in a tiny little circle of improbability. 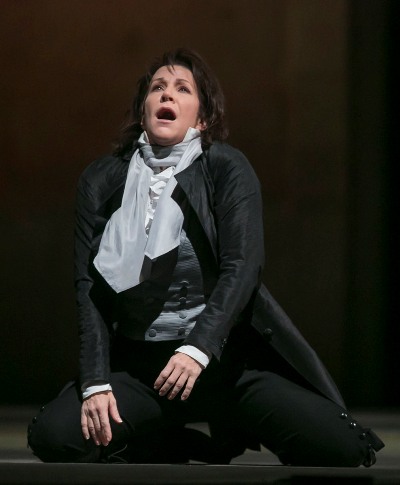 As with the great operas of Handel that the Lyric Opera of Chicago has helped to usher back into familiarity, the challenge is for contemporary producers to find a way. The most successful aspect of the uneven “Clemenza” production that opened March 5 at the Civic Opera House, after previous rounds in Aix-en-Provence, Toulouse and Marseille, remains the unmistakable fineness of Mozart’s music itself. For this, there is to thank the sure hand of music director Andrew Davis, and the virtuosic vocal art and dramatic genius of two great singers in their prime.

Mezzo-soprano Joyce DiDonato shone in the trouser role of love-blinded but also conscience-stricken Sesto, and tenor Matthew Polenzani found great sympathy in Sesto’s friend and emperor Titus, who strives to forgive even as Sesto betrays their deepest bond. Their singing was over the top, and their dominance in the cast, combined with their powerful acting, helped to simplify and focus  a story that can seem ridiculous to modern sensibilities despite real matters of depth and import. Davis has described Sesto as Mozart’s Hamlet. My guess is that DiDonato would agree. 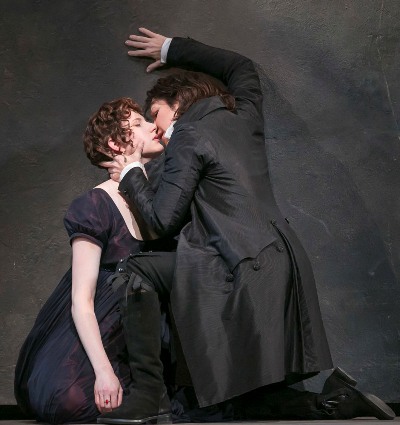 Much of the action turns upon the machinations of the vengeful troublemaker Vitellia, surely a tiger’s role to grapple with. Vitellia’s father was the emperor whose throne was usurped by Titus’s father, and she wants it back. Soprano Amanda Majeski is still emerging as an artist, and although she has a voice of power, range and flexibility, it was perhaps imprudent of Lyric to book her into the company of the multi-dimensional Polenzani and DiDonato. Still, what an opportunity. Vitellia’s a complicated woman who, on the one hand, would like to kill Titus. On the other, she’d like to marry him.

In either murder or marriage, Vitellia sees a path to the throne that’s rightfully hers, never mind that “right” is a curious concept given the historical record. Majeski’s Vitellia changes course so impulsively that I couldn’t help thinking Don Alfonso — the old cynic in Mozart’s previous opera, “Così fan tutte” — must be smiling. Don Alfonso liked to bet against the ability of a woman to make up her mind; he would have made a fortune on Vitellia. 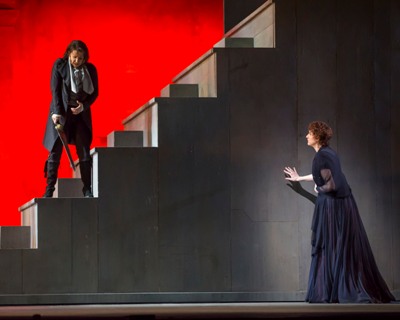 The problem is the comic risk. There’s only a little room in passing for Jimmy Durante-style vacillations — Did you ever get the feeling that you wanted to kill, then you got the feeling that you wanted to wed? — because Vitellia’s talking about murder. It’s tragic business the way she uses Sesto, who is helplessly in love with her, to push her cause forward by this means or that. Sesto’s problem is a crisis of conscience, and if one is to believe in the helplessness of his dilemma, Vitellia must be a truly dominant, regal presence, an elegant manipulator, one who is constantly recalibrating her odds up to and including her decision to confess. There are wonderful arias of panic (“Vengo!” Aspettate! Sesto!”) and pitiable regret (“Non più di fiori”) in which Majeski held her own, but there is more to be mined from the libretto’s treacherous changes of course. Vitellia’s talent, like Lady Macbeth’s, is to stay ahead of the game. 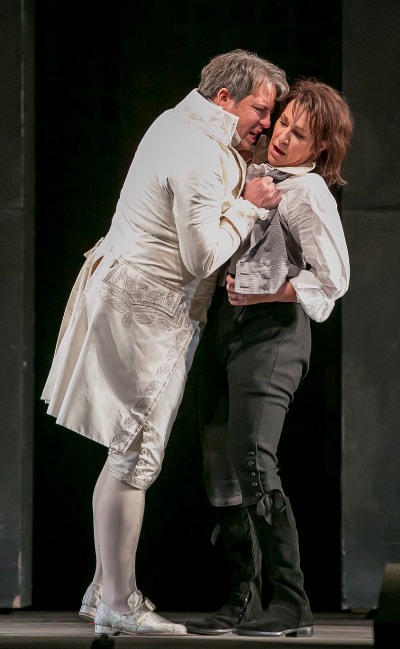 Davis conducted “Clemenza” at the Lyric in 1989, and his gracefully animating reading radiated assurance along with a quick-fire changeability to support the considerable mad streaks this opera requires. Much of the drama is propelled forward in the accompanied recitatives; they seemed brisk, naturally spontaneous and sometimes playful, with William C. Billingham at the keyboard. The dark virtuoso colorings by principal clarinet Charlene Zimmerman (“Parto, parto”) and basset horn player Linda Baker (“Non più di fiori”) in the celebrated showpiece arias for Sesto and Vitellia, respectively, were reminders that Mozart’s stunning Clarinet Concerto was also one of his last completed works, written around the same time. Emily Birsan’s cameo aria as the steadfast Servilia was completely charming; indeed she and Cecelia Hall (who portrayed Servilia’s sweetheart Annio (in the opera’s second trouser role) reminded one of the young couple in “The Magic Flute” — princess Pamina and prince Tamino, whose ravishingly innocent music Davis and his orchestra were most certainly channeling.

David McVicar both designed and directed the original “Clemenza” production in Aix, revived by Marie Lambert here. The drama involves a lot of recitatives, solos and duets – in short a lot of talking – and the design choice I liked best was the shallow area of the stage McVicar worked with, keeping almost all of the monologues and conversations up front. He updated the tale to Mozart’s time, which can work, because we know they had emperors still: Mozart was in the middle of writing “The Magic Flute” in 1791 when he got the commission, at double the going rate, to write “Clemenza” in honor of Leopold II, the recently named Holy Roman Emperor, who was traveling to Prague for his coronation as King of Bohemia.  (Kingships were part of the Emperor’s full official title, and this one came by way of Bohemian nobles, who must have been delighted down to their aristocratic socks by Leopold’s decision to reverse a policy that had freed their serfs.  Somewhat ironic circumstances, given the spirit of the opera itself.) 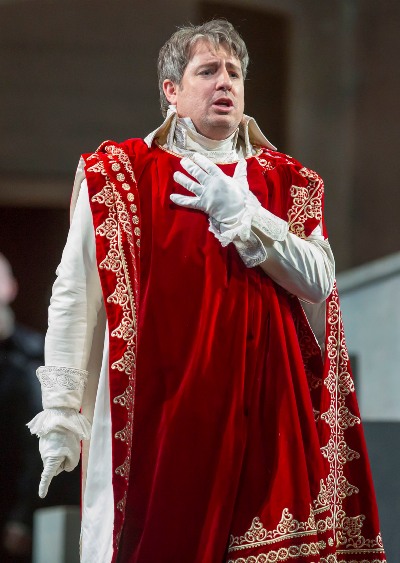 Setting the opera in Mozart’s time did rob “Clemenza’ of some of its Roman imperial glitz. Drab walls, small windows and earthy colors were the dominant hues, and almost all Jenny Tiramani’s garment designs were black. There were no monumental bulidings. The set had the non-descript tone of pretty much any 19th-century street scene. And in that context, the things that McVicar and Tiramani did choose to highlight had the weight of symbolism. Caesar’s white finery had a starry gleam. Tito’s guards, a highly choreographed little army in iridescent black with glittering swords, were seen as very imposing.  The threat of an uprising turned the walls red. The head of Caesar’s statue was also bright head.

Or is that blood red? McVicar’s  primary directorial concept is that Titus’s clemency was not a strength, but rather a weakness of character, and one that spelled imminent doom in the form of a revolt, probably by his very own guards. For the record, the historical Titus officially died of a fever in office after only two years, but history is interpretation after all. McVicar’s choice doesn’t come out of nowhere; there are even some last lines in the libretto that, in a certain light, could be seen to point to trouble ahead. Not sure all this helps the bulk of this opera’s telling though, and it further seems at odds with Mozart’s music, which much like “The Magic Flute” wraps the finale in a consummate embrace of optimism, tolerance, selfless love and higher moral values.