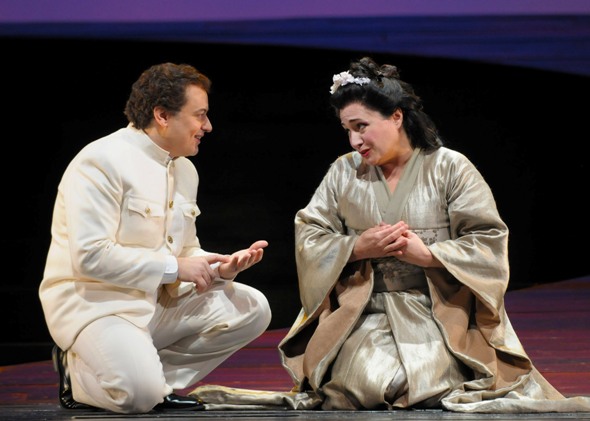 Review: “Madama Butterfly” by Giacomo Puccini, libretto by Giuseppe Giacosa and Luigi Illica, with a reprise cast featuring Patricia Racette as Cio-Cio-San and Stefano Secco as Pinkerton, at the Lyric Opera of Chicago through Jan. 26. ★★★★

The impressive soprano Patricia Racette has surely delivered the “Madama Butterfly” that British stage director Michael Grandage had in mind when he envisioned his staging of the story of Cio-Cio-San, the poor young geisha who chooses to believe, in spite of all evidence indications to the contrary, that her marriage to American naval officer B. F. Pinkerton is the real thing. 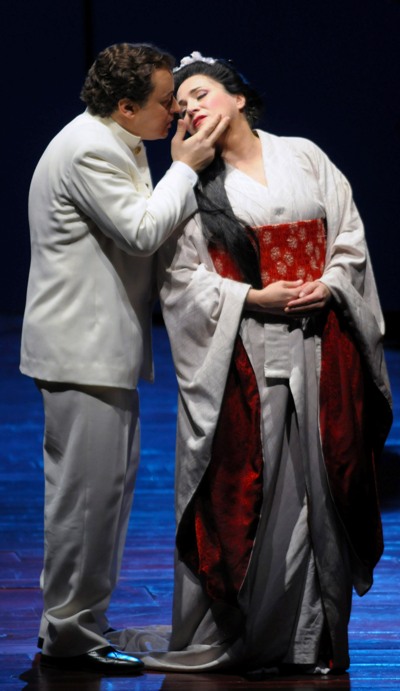 Racette may not look like a fragile 15-year-old Japanese bride, but then few dramatic sopranos who specialize in Italian opera do. Yet Racette is one of those singing actresses who can make you believe just about anything, so sincere is her art and so particular her skills.

It’s the second time around for “Butterfly” at the Lyric this season, with new leads in the roles of the love-struck bride and her temporarily enchanted cad, and this time the Grandage production positively sprang to life. Succeeding Amanda Echalaz, Racette was truly impressive as the wronged Cio-Cio San.

And although fine Milanese tenor Stefano Secco is perhaps a foot shorter than the towering James Valenti, who sang Pinkerton in the fall, he had the gloriously tall high notes that Valenti lacked and pursued Butterfly with such exuberant zeal that one could imagine how a girl might find him charming. Pinkerton’s aria of regret, “Addio, fiorito asil” is a pretty pathetic apology for the lives he has ruined, but I had to admit that Secco’s interpretation, in his promising Lyric Opera debut, made him seem less of a jerk than usual.

Lyric is a co-commissioner of Grandage’s new-to-Chicago production, along with the Houston Grand Opera and the Grand Théâtre de Genève, which have already presented it. Louisa Muller, who has worked with Grandage and has experience in many houses, was the revival director here.

“Butterfly” is likely to be in the company’s rotation for a decade or more, and it’s a relief to know that it can work, although its spareness places a burden on the singers to create a sense of intimacy and intensity as the poignant personal drama unfolds. Nor does the open-air design seem particularly voice friendly; without walls behind them, the singers come far down front to be heard. Conductor Marco Armiliato wrestled with the danger of the orchestra cresting over, rather than swelling under, the singers at what should have been their finest moments. (For images of the full set, although not with the Lyric artists, view the Genève footage below.)

The central image is spectacular, though, designed by Christopher Oram. A pristine sweep of a mountain path that seems to rise to the stars even as it encircles the humble abode of Puccini’s child bride. In a lovely coup de théâtre, the raked path begins a slow rotation at the onset of the Humming Chorus, as Cio-Cio-San — along with her young child, Sorrow, and the maid Suzuki — waits in vain for what she thinks will be her husband’s imminent return.

The Humming Chorus was a particular triumph for Racette, who though silent was transfixing as an innocent sentinel, reliving her passion and grief in perfect counterpoint to the music’s sweep, alive in every moment and never repeating her gestures, as her long vigil relinquished itself to utter exhaustion.

Racette’s complete psychological investment in the role extended to imaginative musical detail throughout the performance. She is a musician of rare intelligence. Butterfly’s most famous aria, “Un bel di” — in which the young woman fantasizes about the day her husband will return, from the ship’s first puff of smoke in the distance to the game of hide and seek she plans by way of delaying the pleasure of their meeting — was exquisitely formed, a tender delight, and seemingly spontaneous. “Con onor muore,” the devastating hara-kiri scene, brought utter quiet to the house.

Performances of this power tend to bring out the best in others. Christopher Purves, outstanding as the conscience-stricken consul Sharpless, MaryAnn McCormick as caring Suzuki, David Cangelosi as the hilarious marriage-broker Goro, and little Kayla McGovern as the affectionate child Sorrow were all at the top of their game.