Fourth in a series of season previews: Comedy “Double Trouble” and two revivals will be augmented by launch of semi-staged retrospectives.

Porchlight Music Theatre prides itself on taking a new approach to classic musicals, “as if the script just came across the desk,” says managing artistic director Michael Weber. Opening with the Chicago premiere of the two-hand farce “Double Trouble,” Porchlight’s 2013-14 season reflects that spirit of approaching a show “with an understanding that we can stretch it and explore it in a different way.”

Weber characterizes Porchlight as “the only regional music theater in the city proper. We embody the Chicago theater storefront sensibility. We’re not looking to Broadway or what they did in New York as our reference point. We’re about Chicago theater. We get Chicago’s best musical actors, people who could play straight theater.

Broadening its exploration of the American musical, the company will launch a series of semi-staged “readings” called Porchlight Revisits, each season focusing on a single year of Broadway shows that may be less familiar – Weber calls them “unsung.”

The debut series, three musicals on three different evenings, spotlights the year 1964, with presentations of “Anyone Can Whistle,” “Golden Boy” and “Fade Out – Fade In.” 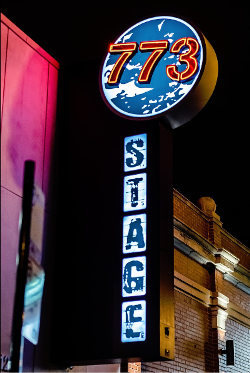 During the 2013-14 season, all Porchlight productions will be presented at Stage 773, 1229 W. Belmont, in a venue that seats about 150. Weber likes this close-up perspective for the audience because of the heightened sense of intimacy and realism. Stage 773 is an easy 10-minute walk west on Belmont from the Red Line’s Belmont stop.

Photo captions and credits: Home page and top: Adrian Aguilar, left, and his brother Alexander star in the two-hander “Double Trouble.” (Photo by Brandon Dahlquist) Descending: Video – Porchlight artistic director talks about this season’s series of single performance, semi-staged productions of musicals that opened on Broadway in 1964. (Vimeo) Alexander and Adrian Aguilar as the song-writing duo in “Double Trouble.” Thomas “Fats” Waller. (New York World Telegram and Sun photographer Alan Fisher via Wiki Commons) Original cast album of “How to Succeed in Business Without Really Trying.” Angela Lansbury, left, as Mayoress Cora Hoover Hooper with Lee Remick as Nurse Fay Apple in the original 1964 Broadway production of “Anyone Can Whistle.” Porchlight Music Theatre’s home for the 2013-14 season, Stage 773. Below: Adrian Aguilar and Susie McMonagle in “Pal Joey” at Porchlight. Rebecca Finnegan, who starred in “A Catered Affair” at Porchlight, will return in the Angela Lansbury role in “Anyone Can Whistle.”