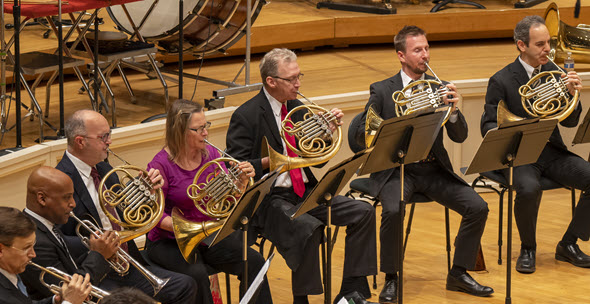 More often than not, references to the Chicago Symphony Orchestra brass section begin with the V-word: vaunted. Since time out of mind, the glorious sound of the CSO brass battery has been held up as exemplar to the orchestral world. And it is always a special occasion when that entire gleaming section takes the spotlight alone for a concert devoted (almost) entirely to its distinctive blended resonance. Such a program on Dec. 15 drew a solidly packed and thunderously appreciative audience to Orchestra Hall.

It was a night fashioned of clever arrangements: Nothing on a program ranging from Mozart and Brahms to Holst and Mahler was originally written strictly for brass instruments. The performance conducted by Michael Mulcahy, himself a trombonist with the CSO, began in great fun with excerpts from Mozart’s opera “The Magic Flute” and ended in hair-raising grandeur with the final pages of Mahler’s Symphony No. 2 in C minor (“Resurrection”). 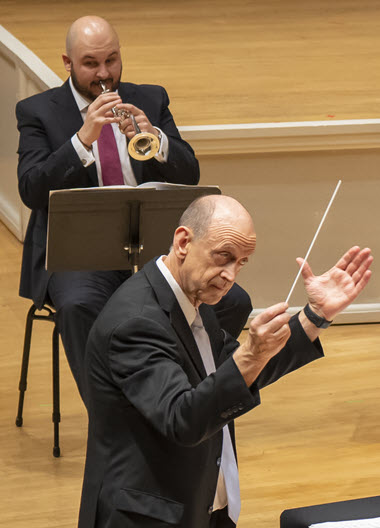 Perhaps the most striking feature of this all-brass version of the Overture to “The Magic Flute” was how elegantly and eloquently trumpets and French horns compensated for the absence of strings. Similarly, the low brass embrace of Tamino’s love-struck aria “Dies Bildnis ist bezaubernd schön” captured the magical ardor of a young man’s infatuation.

Then, in a twinkling, principal trumpet Esteban Batallán tossed off the dazzling coloratura of the Queen of the Night’s fearsome aria “Der Hölle Rache kocht in meinem Herzen,” against the sparkling backdrop of his fellow stars. This “Magic Flute” frolic concluded with the birdcatcher Papageno’s lament and bubbly change of heart when the Papagena of his dreams shows up – expressed here in a delightful ball-toss from instrument to instrument as the smitten lovebirds plan how they will feather their nest with little ones.

Brahms’ Variations on a Theme by Haydn seems like a natural for adaptation to brasses, and indeed the ever-popular orchestral work’s chorale, eight variations and finale were, one by one, as skillfully delivered as they were imaginatively and colorfully reconfigured. That granted, extended breaks between each section – timeouts for draining spit from all that plumbing – turned the work’s expected integration and fluency into the stop-and-go experience of a suite rather than a set of variations.

But a fiery arrangement of “Jupiter” from Holst’s orchestral pageant “The Planets” worked very well, indeed. This luxurious, brilliant and exuberant performance by the Chicagoans displayed their brassy best. It was also a highlight of Mulcahy’s evening of musical leadership – cosmically fascinating and thrilling. 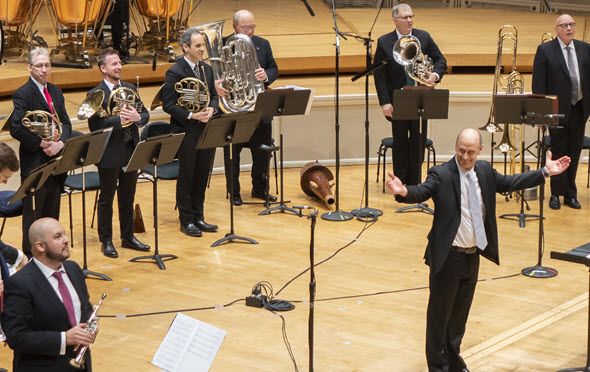 Two short suites, offered consecutively, provided something of a brass porrait gallery, a marvelous showcase of the depth, palette and versatility of these CSO virtuosi. First came Holst’s “A Moorside Suite” – a vibrant Scherzo and dappled Nocturne giving way to a crowning March in grand British imperial tradition. The second series of tableaux was an arrangement by principal trumpet Batallán titled “Sacrae Suite,” pulling together three Russian pieces of shared solemnity, tonal opulence and spiritual reflection.

The concert’s finale was the definition of grand: a broad swath of the closing movement from Mahler’s “Resurrection” Symphony in a spectacular arrangement that precisely framed the gravitas and aspiration of the original work. Off-stage trumpets summoned the chaos of purgatory before the reunited ensemble began the long, swelling musical ascent of transmigration. 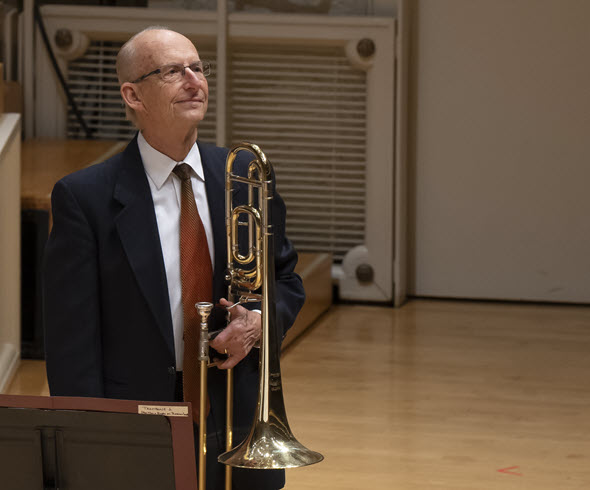 So closely did Mulcahy and his musicians, augmented by timpani and percussion, mirror the full orchestral context of Mahler’s work – again banishing from mind the absence of strings and  woodwinds – that one might have forgotten entirely about the other missing element: the chorus. The audience sprang from its seats, roaring in mad approval. I couldn’t help thinking Mulcahy could have taken it from the top, on the spot, and those listeners would have returned to pin-drop quiet, in rapt gratitude.

While Mulcahy didn’t reprise Mahler, he and the band did offer a gorgeous encore, an arrangement by CSO trombonist Jay Friedman titled “Gathering of the Armies” from Wagner’s opera “Lohengrin.” Regal music, it spilled forth as an extended, ever-swelling fanfare – a majestic epilogue to this splendorous affair.