‘Madama Butterfly’ at Lyric Opera of Chicago: From a clear-sighted soprano, a high purpose 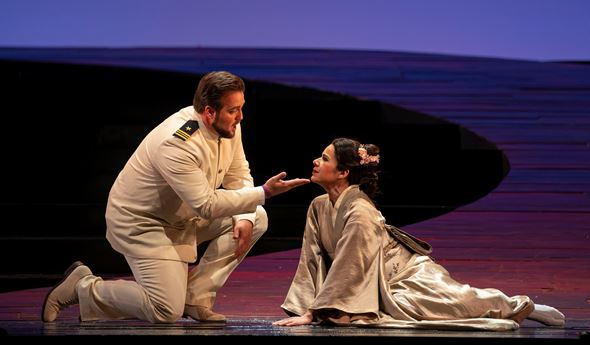 Review: “Madama Butterfly” by Giacomo Puccini, at Lyric Opera of Chicago through March 8. ★★★

In the #MeToo era, Puccini’s opera “Madama Butterfly” might seem awkwardly antiquated, embarrassing, even counter-cultural and irrelevant. And though it has held the boards as a box office favorite since its premiere in 1904, Lyric Opera of Chicago also evidently saw a problem in mounting its current production, which opened Feb. 6. 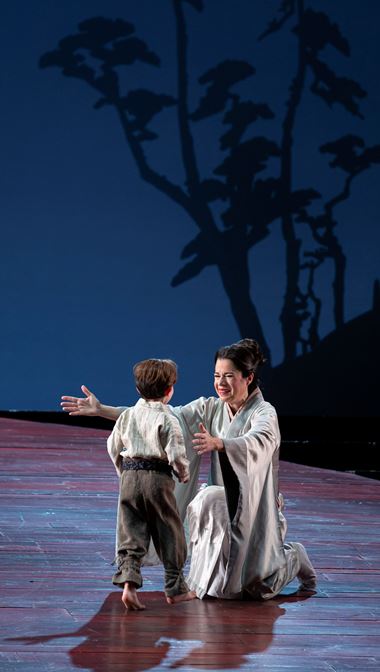 The night’s program book advances not one but two fulsome arguments – apologias, to use that old and now shaded word – on behalf of this work about a beautiful 15-year-old geisha who is rented out in “marriage” to an American naval officer. He sees in this girl, Cio-Cio-San, a fantastic diversion until he returns to the States to marry for “real.” Cio-Cio-San, also called Butterfly, thinks this is the real thing, and when her officer ultimately departs, leaving her pregnant, she faithfully awaits his return for three long years.

Viewed through our contemporary lens, “Madama Butterfly” is an ugly tragedy set to exquisite music, a sort of “Romeo and Juliet” with a perverse twist. It is ugly in the carelessly exploitative persona of Lt. B.F. Pinkerton (sung by tenor Brian Jagde), who takes out a long-term lease on Butterfly that can be canceled monthly; it is tragic, heart-breaking still and always, in the naïve conviction of the girl, who believes in her soul that the love and trust she has placed in Pinkerton will be vindicated.

And it is soprano Ana Maria Martínez’s finely sung, elegantly drawn portrait of Butterfly that once more raises the opera above its deplorable subject matter and into the realm of high art.

Indeed, Martínez single-handedly rescues a shapeless production that’s plagued with issues on several fronts. Louisa Muller’s “revival direction” of Michael Grandage’s original concept is leaden, unkind to every character and indifferent to the magic between the girl and the bewitched officer that lends the story its claim to legitimacy.

The supporting cast doesn’t fare much better in this underdone enterprise. While Anthony Clark Evans creates a sympathetic Sharpless, the American consul who gets drawn into service as the absent Pinkerton’s intermediary with Butterfly, Rodell Rosel’s Goro, the agent for geisha marriage rentals, mostly flutters about. And though Deborah Nansteel offers an appealing voice as Butterfly’s stalwart servant Suzuki, the staging hardly supports her generosity of spirit. 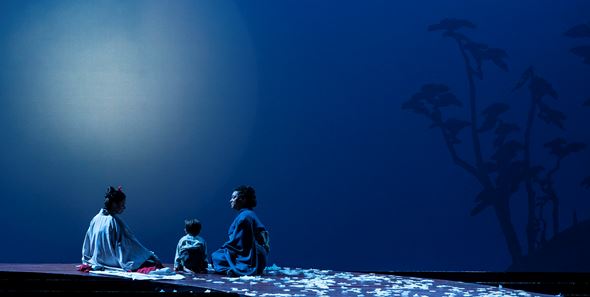 Committed to a long night of waiting for Pinkerton are, from left, Butterfly (Ana Maria Martínez), her child (Graham Macfarlane) and Suzuki (Deborah Nansteel).

Christopher Oram’s set, for all its Japanese curvature, condemns the singers to stark spaces with no real intimacy. The first act’s lyrical consummation, the wedding night duet for Butterfly and Pinkerton, though sung ardently and beautifully by Jagde and Martinez alike, hovers in a place of charmless aridity.

The finesse of the duet granted, for the most part through the expository scenes of the first act Jagde sang at one fearsome volume. The fact that Pinkerton is a self-indulgent brute does not exonerate the actor from bringing some nuance to his portrayal.

Likewise, conductor Henrik Nánási pushed sound from the orchestra in the first act as if in a contest with the pressing tenor. Balances were better in Act 2, when Martinez ruled the stage and Nánási responded to her assured singing and measured pace. However, the transitional vigil from Act 2 to Act 3, as Butterfly, her little boy and her servant Suzuki await Pinkerton’s reappearance through the long night, suffered doubly from pointless use of the turning set and the conductor’s uncertainty about how to sketch the scene orchestrally. 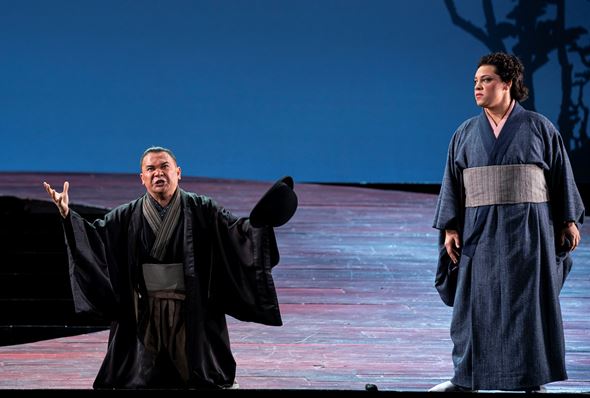 The meddling Goro (Rodell Rosel) gets no sympathy from Suzuki (Deborah Nansteel).

And yet Martínez’s dramatically transcendent turn as Butterfly over the last two acts was treat enough. To the desperate but proud young woman, who rejects marriage to a wealthy prince as she watches her own resources vanish, Martínez brought a determined aura of pride, strength and unshakable faith even as she allowed glimpses of the vulnerability just beneath that surface.

Her vocal performance was informed by her authoritative acting. Butterfly’s vision of that wonderful day when Pinkerton’s ship will arrive in the harbor, “Un bel di,” unfolded as half proclamation, half prayer. And her farewell to her child, who interrupts her suicide, was wrenching as a soaring testament to her sense of high purpose.

No matter how you frame him, Pinkerton is self-centered, reckless and destructive. Surely the opera’s most difficult bit to bring off is his belated rush back to Butterfly as if to – exactly what, we are not sure. In Lyric’s staging, one gets the sense that while Butterfly has grown through this awful business, Pinkerton has not. Alas, as Butterfly is dead, Martínez cannot save that final moment.

At the March 4 and 7 performances only, the roles of Butterfly and Pinkerton will be sung by Lionna Haroutounian and Brandon Jovanovich.