When Giovanni’s servant feels some real pain, the troupe of singers closes ranks to carry on 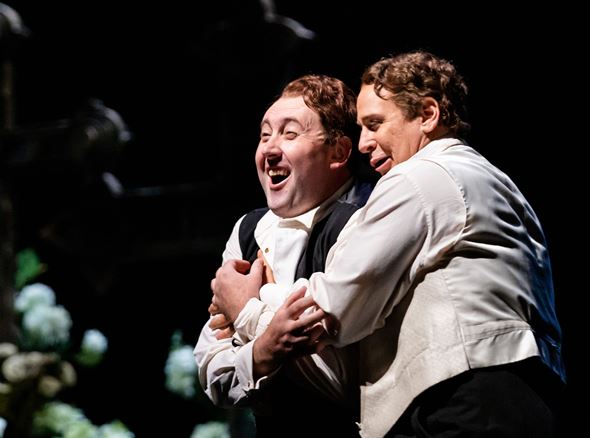 Early in the run of “Don Giovanni” at Lyric Opera, Matthew Rose, left, as Leporello with Lucas Meachem in the the title role. (Kyle Flubacker photos)

What unfolded on this crazy occasion was drama piled upon drama, a quite heroic finish by an injured singer and a response by the audience that went beyond understanding to admiring, embracing support. 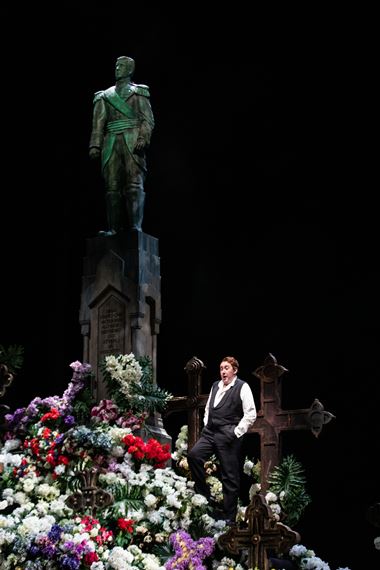 There was no climbing up to the Commendatore’s statue for Leporello (Matthew Rose) on the night the singer was injured. He rolled alongside the statue in his wheelchair.

If you’ve ever pulled a muscle, you know this is not exactly like biting your lip. It can be incapacitating. But Rose agreed to continue. He just wouldn’t be able to move very easily. In fact, he showed up with a cane.

Which brings us back to the unscheduled singer standing in as Don Giovanni. The plan from the beginning of the run was for the original Giovanni to be replaced for the last three performances. But the scheduled replacement injured himself: He, too, had pulled a muscle!

So bass-baritone Ryan McKinny, who was finishing up his own run at Lyric as the rapist-murderer Joseph De Rocher in Jake Heggie’s “Dead Man Walking” and who had sung the Mozart role with Houston Grand Opera last season, agreed to step in. He could not have anticipated having to improvise stagecraft in his interaction with a lame Leporello.

But that’s exactly what McKinny suddenly faced in his third and last performance. The injured Rose could scarcely get around on stage, even with the aid of a cane – which “prop” McKinny and Rose put to highly amusing use as they began figuring out on the fly how to make this work.

Rose was seriously hurt, and doubtless in significant pain. In the second scene of Act 2, the wounded Leporello rolled into view in a wheelchair. By this point in the opera, there’s some pretty high-intensity physical stuff going on as Donna Anna (soprano Rachel Willis-Sørensen), Giovanni’s seduced and abandoned paramour Donna Elvira (soprano Amanda Majeski) and Donna Anna’s betrothed Don Ottavio (tenor Ben Bliss) are closing in on the rascal.

And here’s where the ensemble closed ranks as a troupe. Instead of roughing up Leporello (now disguised as Giovanni), they shoved his wheelchair around. The injured Rose, continuing to sing marvelously, played out Leporello’s dicey situation at the keen edge of dramatic purpose, as if he weren’t stuck in that wheelchair at all. And the bizarre, poignant, funny circumstance of the whole company proceeding as if nothing were amiss clearly hit the audience square in the heart. The house rang with a singular sort of participatory laughter.

In the final scene, when the openly debauched Giovanni is confronted at his home by the statue of the Commendatore (Donna Anna’s father), whom the rake has killed. McKinny accommodated the wheelchair-bound Rose in off-hand ways that no aristocrat would ever do: Giovanni dropped his dinner napkin and picked it up himself, then got out of his chair to pour his own wine. But the dramatic impetus of Mozart’s music and the spirit of this bravura improv kept the show going.

Even the conductor, James Gaffigan, got into the act in the curtain calls. With the audience on its feet, whooping it up for the whole company and certainly for Rose, Gaffigan got behind the confined singer’s wheelchair to motor him forward as the company came downstage for its final bow. It was not a moment, or a “Don Giovanni,” that anyone present will soon forget.