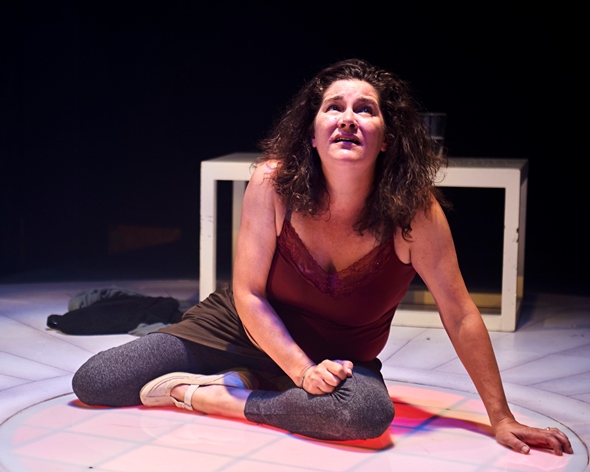 Julia Siple thought she knew the “black sheep” character she plays in Lucy Kirkwood’s “Mosquitoes” at Steep Theatre. But in the refining process of rehearsals, Siple discovered that erratic and often outrageous Jenny – who’s also not the sharpest knife in the family drawer – had another, deeply appealing side to her: a tremendous sense of empathy.

“I was sort of surprised by how much she wants everyone around her to feel love,” says Siple, who as a slow woman turns in a dazzling performance, at once crude and sensitive, expansive and deceptively focused. “This crazy person is full of empathy. It’s a fascinating dichotomy: anxious and nutty but also down to earth and loving. These things do coexist.” 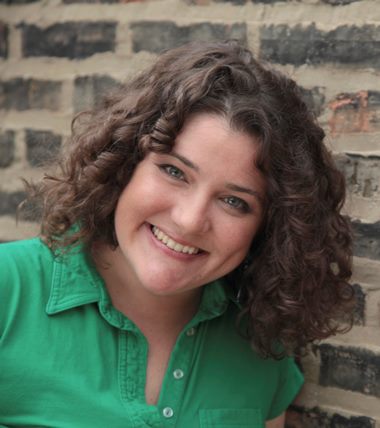 Jenny is the younger of two adult sisters, an altogether unremarkable woman who has always languished in the shadow of her brilliant sister Alice, a noted physicist (played by Cindy Marker). Both of their parents, the mother now elderly and the father deceased, also were physicists. The father garnered a Nobel Prize, and mom never stops insisting that in a more just world she also would have received a Nobel for her work on the same project.

While big sister Alice and her team probe the innermost secrets of matter, Kirkwood’s play drills down into the substance and meaning of family and the subatomic stuff of the human condition.

“Jenny is a complicated spirit, a human being who understands people and feels things deeply, who listens and cares and responds,” says Siple, “even if she doesn’t always respond in the best way. She was born into a family that values intellectual superiority and loves science. So she’s a black sheep.

“But she’s very good at reading people and knowing their needs. She’s always trying to help. This deep connection to people is her baseline. She wants to reach out to others in a meaningful way.”

Siple credits the playwright with creating a complex and honest character whose very directness makes her irresistible: “The writing is so vivid, it wants to come out of your mouth. It has a certain rhythm to it. You want to bring yourself to it.” 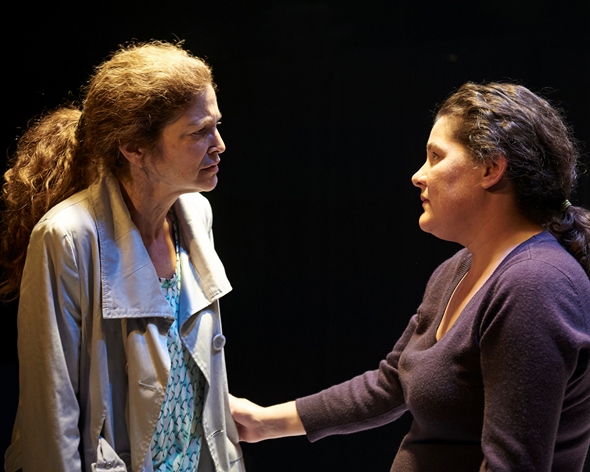 The relationship has always been testy between the very ordinary Jenny (Julia Siple, right) and her sister, the physicist Alice (Cindy Marker).

Yet the actress also attributes her convincing take on Jenny to motherhood.

“I’ve been a part of Steep for a long time, since 2006, but this is my first show in four years. I have a 3 ½ -year-old daughter. All my life experiences in these last years have been very useful. Having a child grounds the role in a different place. The play is about connections between people, but it’s also about bigger ideas – humanity and maybe where we are in the universe.

“Right away you start to see this contrast between the two different types of intelligence: that of science and that of the soul. That contrast leaped out at from the very start of our table work – that process of exploring the play and talking things through. It always gets my creative mind going. When you finally get on your feet, those ideas sit in the back of your mind like a slow cooker.” 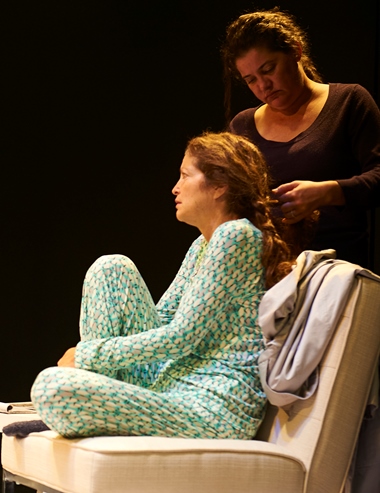 Jenny (Julia Siple, right) has spent her life in the shadows behind her brilliant sister Alice (Cindy Marker).

The relationship between the sisters is charged and volatile. Siple says that linkage is tricky because they are so unlike each other, but also profound because at bottom they share blood and spirit.

“Jenny relies on Alice as her rock,” says Siple. “In Jenny’s world, Alice is the person you’re always looking up to. But big sister has bigger fish to fry – big ideas up in the sky, literally over Jenny’s head. So Jenny has these mini outbursts, then suppresses the hurt or the isolation. When she gets close to feeling something really intense, really painful, she deflects it by turning it into a joke.

“There is a difference between someone so sad they want to die and someone who’s going to kill herself. Jenny’s a fighter. She will find some way to get through. She has this instinct to keep going, no matter what. It’s a beautiful thing when someone is determined to overcome all the things that come at them. Jenny is trying so desperately hard to get to a better place and to be loved.”

Moving Jenny’s complicated character from a rounded idea in Siple’s head to the real-world dimension of the Steep stage was a transition coaxed along by director Jaclynn Jutting, the actor says.

“Jackie really helped me with the physical part – just moving through space, when to sit and listen and when to move,” says Siple. “There’s kinetic friction in this character. And without Jackie, I might have been tempted to go into Jenny’s misery, her dark places. But she’s someone who makes people laugh and who people want to be around. She’s unpredictable, a live wire. So I keep pushing it up to being joyful.”