‘Between Riverside and Crazy’ at Redtwist:
Ex-cop, brash cop and a gritty deal on the line 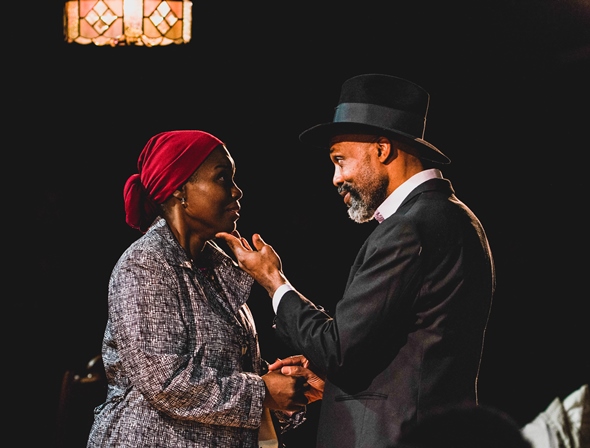 Review: “Between Riverside and Crazy” by Stephen Adly Guirgis, at Redtwist Theatre through Feb. 10. ★★★★

Pops is a retired black New York cop – retired because he got thoroughly shot up by a fellow cop (white) while Pops was off-duty and hunkered down in the wee hours at an unsavory watering hole. But he gets along well enough in his rent-controlled Riverside Drive apartment, which he shares with a twentysomething son Junior, who’s into some shady business, and a slow-witted, adoring young ex-con who calls him Dad.

That’s the frame, the border around the stress points, of Stephen Adly Guirgis’ Pulitzer Prize-winning play “Between Riverside and Crazy,” which enjoys a detailed, charged and mesmerizing go-round in the tiny arena that is Redtwist Theatre. 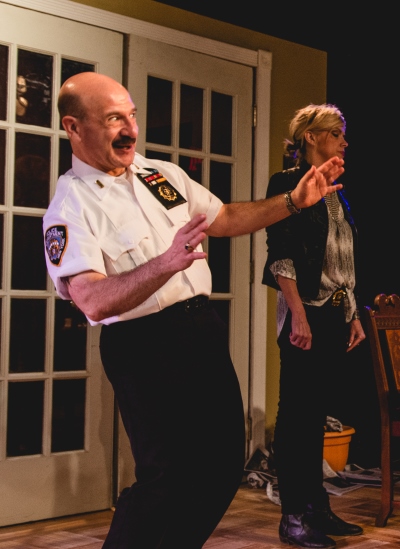 Pops, played by Kenneth D. Johnson with street-chiseled sagacity, has an unresolved grudge and lawsuit against the police department and the city that dates back to the shooting. From the start, he has claimed that the white cop was simultaneously unloading his service revolver into him and reviling him with the N-word. Pops wanted a big cash settlement from the department, which he never got. Now, however, he’s suddenly looking at a more urgent political problem. The city wants him to give up his apartment, for which the landlord could command ten times his rent from a new occupant.

The bearer of this demand is a smarmy, upward-clawing police lieutenant named Caro (Adam Bitterman), who oozes into Pops’ apartment on the arm of Pops’ former partner, Detective O’Connor (KC Karen Hill). After a nice dinner and a pleasant evening of small talk, Caro comes clean with the real reason for their visit: Pops needs to embrace reality, accept a generous sweetener, recognize that his son could be arrested on any number of charges – and give up the apartment.

This is where the dialog zooms in on rigorous declensions of the f-word and its expanded variant, the mf-word. It is not a friendly chat. Johnson’s measured calm becomes the foil to Bitterman’s remarkable, ever more effusive tirade – a rant as irony-laced and outwardly self-deprecating as it is vitriolic and threatening. Imagine sitting two feet from Bitterman, dressed in a crisp white officer’s shirt displaying the badge of authority, his arms spread to embrace this tiny room, the guttural punch of his voice booming off the walls, and you have the gist of the experience – the intrinsic experience of high drama at Redtwist. 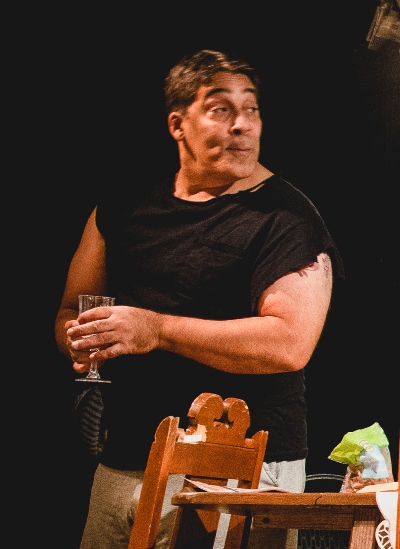 As the slow-witted ex-con Oswaldo, Johnny Garcia sets the plays tone and accent with a compelling paean to Pops.

At its core, “Between Riverside and Crazy” is a stare-down between the old, intransigent ex-cop and the aspiring middle-aged cop who sees promotion if he can prevail. But the play – the apartment – is also peopled by vivid characters scratching at life, looking for an edge; and these, especially at close range, feel like the drama’s beating heart. I’ve seen Guirgis’ play twice previously, in New York and in a production at Steppenwolf. Here, the fine peripheral performances and the actors’ living-room presence lend the Redtwist account a singular resonance.

The play’s tone, texture and accent — all adroitly sustained by director Rinska Carrasco-Prestinary — are established at once by Johnny Garcia’s touching monologue as Oswaldo, a fractured soul fresh from prison who has found a refuge in Pops’ apartment and in his generosity of spirit. Oswaldo’s kitchen table speech is a child-like declaration of love to Pops, as stand-in for the caring parent this young man has never known. We see what befalls when Oswaldo takes Pops’ advice and tries to reconnect with his own father. 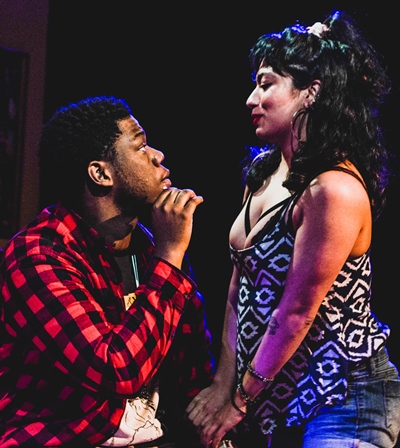 Kevin Tre’Von Patterson sketches a plausible portrait as Pops’ son Junior, whose strained relationship with his dad belies the idealism in Oswaldo’s speech. This apartment is a dorm for the misbegotten. Junior’s sleep-in girlfriend Lulu (the perky, sexy Almanya Narula) well may be the pro the bad cop says she is. She calls Pops “Dad,” too, and quite discombobulates him with her utterly unself-conscious displays of booty.

But the key character in this crazy gallery is the Church Lady, who seems to be from Brazil and weeds herself in national green and yellow (kudos to costumer Uriel Gomez). Actually, she’s a substitute church lady. Pops’ regular social caller is sick, or something, and so this stranger shows up in her place. Gabrielle Lott-Rogers is a delight, surely the most sensual Church Lady ever to serve a holy purpose. Pops offers her cookies, and she reciprocates. Funny, all this time Pops thought the shooting had left him impotent.

The Church Lady changes Pops’ life and shifts the narrative. In a resolution worthy of August Wilson, “Between Riverside and Crazy” transcends circumstance and human frailty, coming to rest in a higher place, between goodness and mercy.