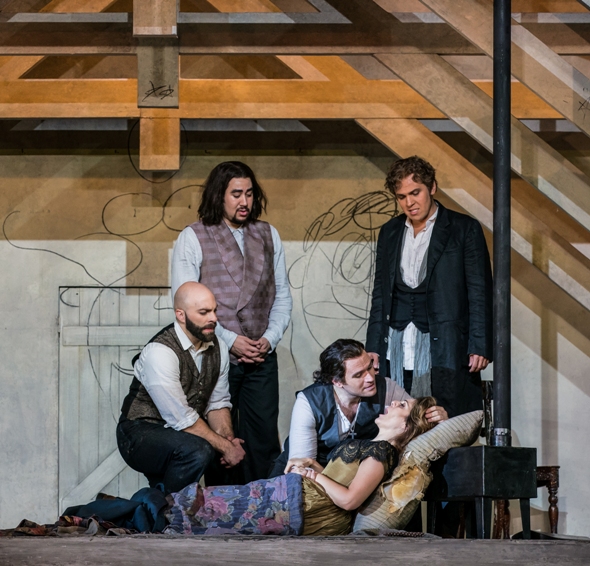 The singing is fine, but the new-to-Chicago Richard Jones production of “La bohème” is a major letdown, starting with the graffiti-strewn garret where the love affair of Rodolfo and Mimi unfolds. (Production photos: Todd Rosenberg)

Except for another Puccini favorite, “Tosca,” no work has graced the stage of Lyric Opera of Chicago more frequently than the Italian composer’s imperishable tearjerker, “La bohème.” The sentimental tune-fest about love and loss amid the impoverished young bohemians of Paris’ Latin Quarter in the early 19th century has received 102 performances up till now under Lyric auspices, spread over 16 different seasons, thus narrowly topping Verdi’s “La traviata” (100 performances) in audience popularity.

So the spirit of multiple Puccinis past haunts the new-to-Chicago production of “La bohème” that opened the season Oct. 6 at the Lyric Opera House, after making initial bows in 2017 at the co-producing Royal Opera in London and the Teatro Real in Madrid. This new “La bohème” marks the return of the respected British director Richard Jones, whose new staging of Handel’s “Ariodante” will arrive here in the spring. Would, one wondered, his new take on a beloved verismo warhorse prove as brilliant and engaging as his previous Lyric shows, Humperdinck’s “Hansel and Gretel” and Janáček’s “Jenůfa?” 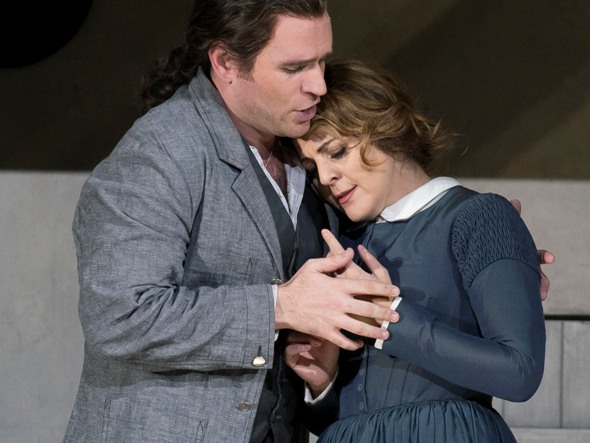 No dice. Despite a superior musical performance by a fine international cast, and firmly idiomatic orchestral playing and choral work from the promising Venezuelan-Swiss conductor Domingo Hindoyan, in his Lyric debut, the production is a major letdown, a misconceived case of too much here and too little there.

We knew we were in trouble when the curtain rose on a bare, cross-beamed barn that looked more like a tool shed in the American Midwest than a Parisian garret. Unfurnished save for a tiny tea chest and tiny stove, its confined space looked as if it could barely accommodate the poet Rodolfo (American tenor Michael Fabiano, in an admirable Lyric debut) let alone him and his three other bohemian cohorts – hormonal young roustabouts playing at life and love, until grim reality sets in. By the end of the fourth and final act, Rodolfo and pals were scrawling misogynist graffiti on the walls.

Jones and his set and costume designer, Stewart Laing, deliberately contrasted the stark austerity of the first and third-act decors – the Barrière d’Enfer tollgate area was essentially an open stage shrouded in gloomy lighting (Mimi Jordan Sherin is the designer) with a barracks-like tavern poking through the falling snow – with the almost obscene opulence of Act 2. 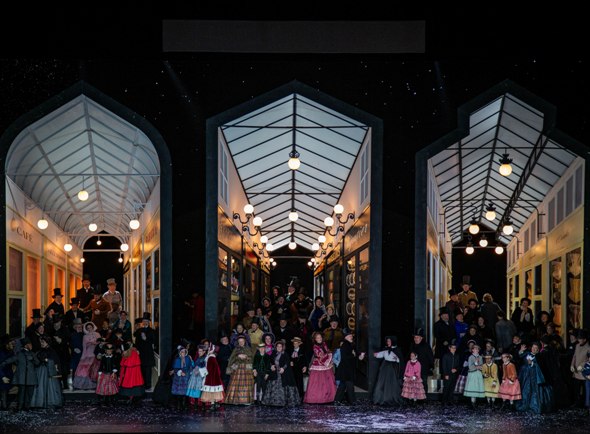 From stark austerity to almost obscene opulence: Christmas Eve in the Latin Quarter.

Fancy shopping arcades, populated by what looks like half of Paris decked out in luxe 1830s finery, revolve to reveal a posh Café Momus of white-linened napkins and tablecloths and bustling waiters pouring champagne. It’s a tony establishment Rodolfo and his pals couldn’t possibly afford, but, more to the point, we lose contact with the lovers Rodolfo and Mimi (Italian soprano Maria Agresta, making a welcome return to the roster) amid the frantic confusion of marching bandsmen, scampering children and so on.

The entire Act 2 is in fact played as vulgar farce, a cluttered mess that appears little more than an elaborate means of showcasing an impossibly over-the-top performance by the alluring soprano Danielle de Niese as Musetta, the painter Marcello’s (American baritone Zachary Nelson) main squeeze. Puccini wrote the character as a coquettish hoyden, not the drunken slut Jones directs De Niese to play here. 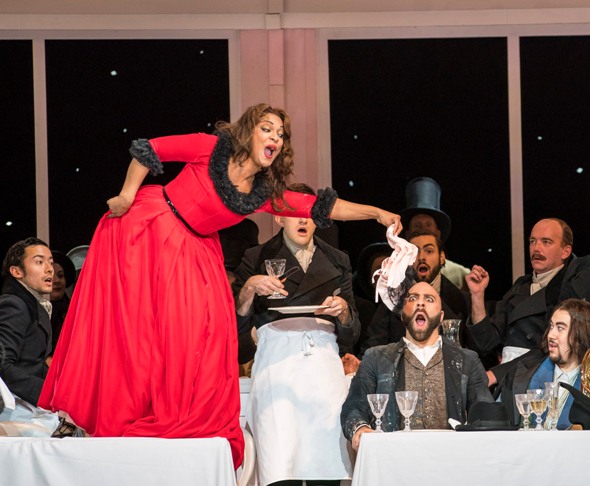 At the climax of Musetta’s big showpiece, “Quando m’en vo,” sung atop a table, she wriggles out of her panties and dangles them in the face of Marcello, sending him into a frenzy of lust. De Niese has the core vocal range for the role and she projects well, but the voice itself is rather lightweight. The singer came into her own dramatically in Act 4 when Musetta’s essential kindness was revealed in her solicitous attention to the dying Mimi. 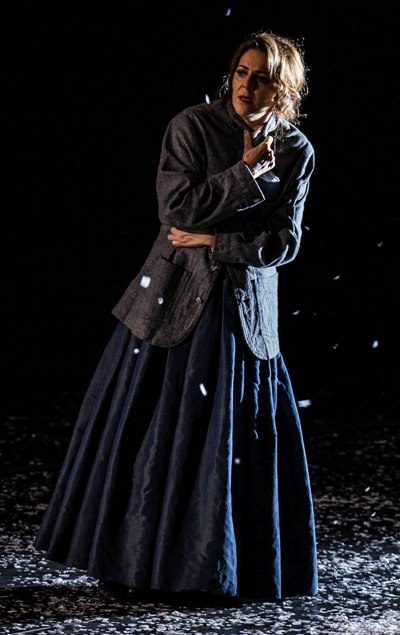 Act 3: Maria Agresta was a Mimi of touching pathos and vulnerability.

Puccini’s wondrous score is fortunately director-proof and it was exceedingly well served by an attractive cast of singers who really looked and sounded like hapless young people grappling with life’s pleasures and vicissitudes.

Well remembered for her Liù in last season’s “Turandot,” Agresta wielded her warm, focused, bantam-weight soprano with liquid beauty and idiomatic phrasing. She took Mimi’s famous Act 1 narrative quite slowly but sustained it well with Hindoyan’s cushiony orchestral support, making an effective piece of storytelling out of it rather than the usual display piece. And in Act 3 she was a Mimi of touching pathos and vulnerability, pouring out the unhappy heroine’s anguish over having to part from the man she loves and whom she knows still loves her as well.

The third act also brought out the ardent best in Fabiano, whose star has been on the rise internationally since winning both the Richard Tucker and Beverly Sills vocal prizes several years back. He brought intense dramatic presence to Rodolfo and was never less than compelling as a singing actor. Together, he and Agresta made Act 3 the highlight of the evening, as the still-hopelessly-in-love Rodolfo and Mimi, in counterpoint with the squabbling Marcello and Musetta (superbly played by Nelson and De Niese), agreed to keep each other warm for one more winter and, later, Rodolfo agonized over the prospect of losing his beloved forever. 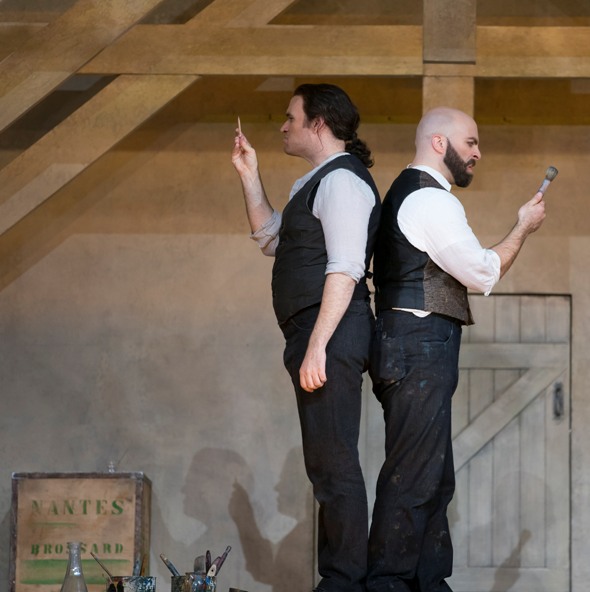 Fabiano floated fine notes in softer passages but unfortunately the top of Rodolfo’s tessitura would appear to lie at the upper limits of his natural range, so the highest tones of “Che gelida manina” sounded squeezed. Perhaps later performances will bring an improvement. On balance, however, one must still consider this a major Lyric debut.

Nelson made a most engaging Marcello, darkly burnished in sound, virile and athletic in manner. Of the other bohemians, the promising Puerto Rican baritone Ricardo Jose Rivera, now in his freshman year at the Ryan Opera Center, made Schaunard a fine comic figure. The impressive Romanian bass Adrian Sampetrean delivered Colline’s ode to his overcoat with a lighter touch than is usually heard, and no irony. Jake Gardner avoided the usual slapsticky overkill as the landlord Benoit and sugar daddy Alcindoro.

Much of what Chicago opera audiences have experienced of “La bohème” in the theater was shaped by the naturalistic production designed by Pier Luigi Pizzi that Lyric finally retired in 2007-08 after 35 years in the local repertoire. I very much doubt this misguided new realization will have anywhere near the same shelf life hereabouts. 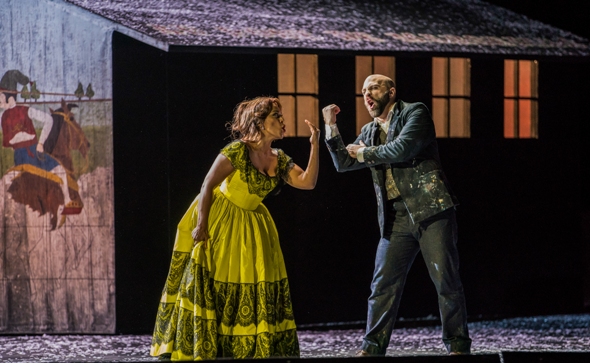