‘The Roommate’ at Steppenwolf: Couple’s odd but the joke’s over when punchline goes dark 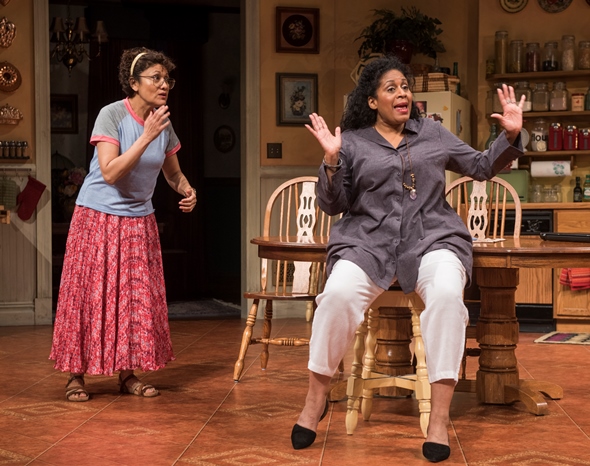 Review: “The Roommate” by Jen Silverman, at Steppenwolf Theatre through Aug. 5. ★★★

Surely the first thing that will come to mind for many viewers in the opening scene of Jen Silverman’s play “The Roommate” at Steppenwolf Theatre is “The Odd Couple” – recreated here for two middle-aged women. Sharon is a dowdy Iowa mom living alone who takes in worldly New Yorker Robyn, who’s looking to get away from it all for a while. But “The Odd Couple” it is not. Silverman’s drama is ultimately tragic, and desperately sad. 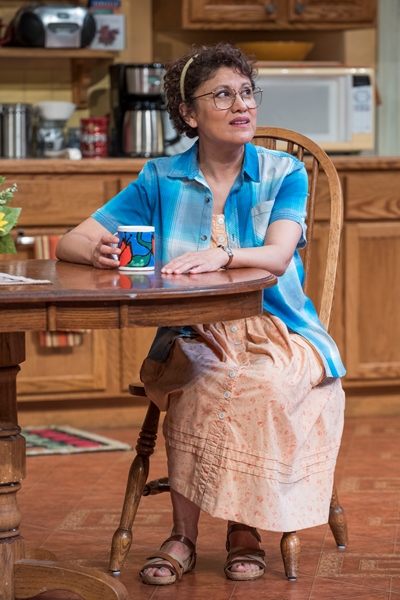 Actually, I couldn’t agree less with Steppenwolf’s promotional pitch for “The Roommate” as “a warm, funny story about a chance cohabitation that sets two lives spinning.” It is not warm, it is not funny – not in the end – and what we witness is one life ricocheting and the other not so much spinning as spiraling into a steep, dark plunge.

In truth, this tragi-comedy isn’t really about the roommate, the visitor, Robyn (played by Ora Jones). Her role is that of catalyst, unwitting provocateur, door-opener. Jones’ expansive, assured performance at once resonates with the command of a woman who’s been around the block more than a few times and tells the weariness of a life marked by the weight of an irregular occupation.

It is Sharon’s story: this sheltered, timid, repressed woman who sees in the daring New Yorker everything that she is not but could be if she just had the nerve. Sandra Marquez is pitch-perfect as a mouse whose inner lion roars at last. Or is it a scream? Is that unleashed ferocity or the howl of a soul in free-fall.

The play’s opening stretch is seriously funny. Marquez and Jones play off each other like a polished stand-up team: the quiet Iowan fascinated by the confident interloper who can’t process the idea that Sharon doesn’t lock her doors – ever. (John Iacovelli’s detailed set is about as homey as a kitchen can be.) Jones is the calm straight man, so to speak, to Marquez’s animated interrogator, who can’t believe anyone could actually live, meaning survive, in the Bronx. 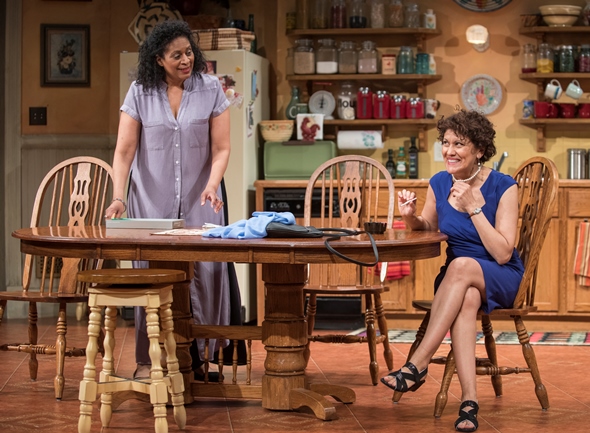 About the only thing the two women have in common is grown children from whom they feel alienated. Sharon’s son resents her intrusive, probing phone calls; usually, she just gets his answering machine. Robyn’s daughter likewise keeps her at long arm’s length; they have a shadowed history that steadily comes to light.

Everything changes when Sharon snoops into a box of her new roommate’s belongings and discovers multiple driver’s licenses with variations on Robyn’s name. When Sharon confronts her, Robyn slyly allows that she’s been into some stuff that maybe, occasionally, edged into the illegal. With that door now ajar, Sharon keeps pushing until the roommate lets her whole seamy past come crashing in. Is the Iowa mouse shocked and appalled? Not at all. She wants to try her own hand at some of this crazy, and remunerative, action. 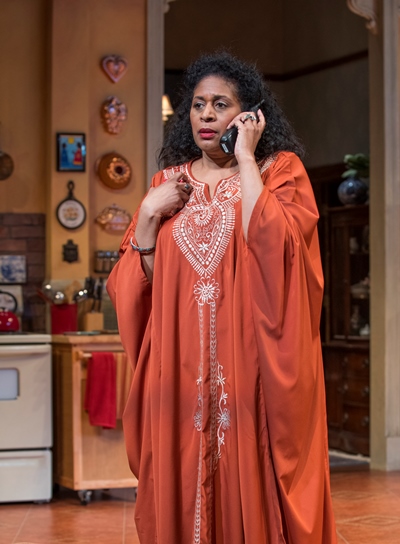 Here’s where the playwright’s narrative gets a little dicey. Robyn, a very experienced con artist and, well, nuff said, all too readily starts showing her landlady how to pull off some nefarious business. Sharon gets completely caught up in the game, the excitement. And Robyn soon sees that she has, if not created a monster, enabled something ugly and unrecognizable to emerge in this nice Midwestern lady.

Now the funny stuff is drenched in dark irony. Robyn certainly isn’t laughing at Sharon’s increasingly outrageous turns of mind. Along with the dismayed roommate, we watch a kind and retiring woman grow maniacal by leaps, cast away her moral compass and hurl herself into an abyss of misdeeds. It is no more warm and fuzzy than it is funny.

The guiding hand of director Phylicia Rashad is evident. Just as Marquez and Jones keep their comic colloquy moving apace in the early going, their separation is stark and powerful – Jones sober and knowing and duly alarmed, Marquez progressing from curious to emboldened to pathological.

And still it isn’t over. There’s one more shattering revelation to come, one more awful option opened to this solitary, bereft, corrupted soul. With that, I believe the word is curtain.