Is that a great white whale I see? No, mate, it’s Verne’s Nautilus, limping into Lookingglass 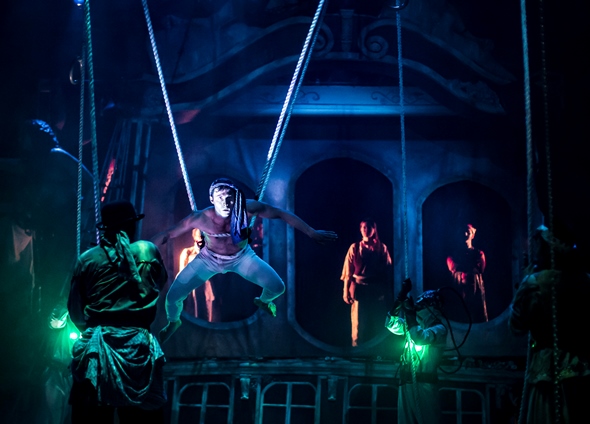 Review: “20,000 Leagues Under the Seas,” adapted from Jules Verne at Lookingglass Theatre, extended through Aug. 26. ★★

After Lookingglass Theatre’s roundly imaginative and engaging 2015 production of Melville’s “Moby-Dick” – which the company then took on the road and brought back for a welcome encore on its home stage – one might have expected Jules Verne’s “20,000 Leagues Under the Seas” to fare no less well, indeed to fall right into the Lookingglass wheelhouse.

Sorry, mates. The best thing to be said for this production, adapted by David Kersnar and Steve Pickering and directed by Kersnar, is that it finally gives us a proper translation of Verne’s original French title. So let’s drop anchor there for a spell. 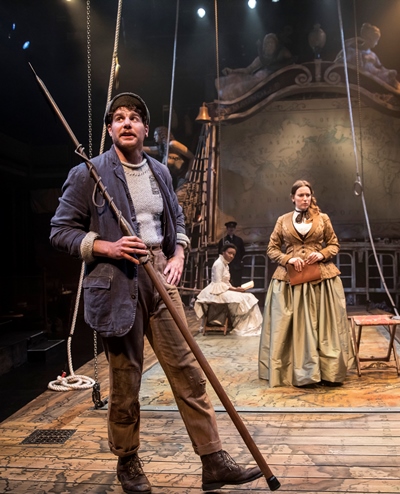 Somehow, a misapprehending early translator apparently took Verne’s intention of distance – 20,000 leagues, or nearly 70,000 miles, almost three times the circumference of our little planet – for depth, which is ridiculous. Verne’s title, “Vingt mille lieues sous les mers: Tour du monde sous-marin,” not only plainly says “seas” (mers), but also adds the unequivocal subtitle of “tour of the world under water.” How this ever got bollixed is a head-scratcher. And then along came the 1954 Disney film to confirm the singularity of “sea,” and that was that.

The gist of “20,000 Leagues” is that one Captain Nemo, disaffected with the whole of humanity for abuses committed against him, has withdrawn from the surface world into the isolation of life under the seas – in an iron submersible of his own design. Dubbed the Nautilus, this unprecedented and invincible ship is manned by a devoted crew and turned to the destruction of sea-going vessels that Nemo regards as instruments of mankind’s depravity.

But the world above doesn’t grasp that this terror of the deep is a man-made craft. Everyone thinks it’s a sea monster, and an expedition is organized to hunt it down and kill it. When the paths of hunter and hunted finally cross, Nemo’s submarine, which boasts a nasty iron ripping spine down its length, sends the pursuing ship to the bottom. Only three people survive: the harpooner Ned Land, a French professor of ichthyology – a consultant on the ill-fated vessel – and her assistant. 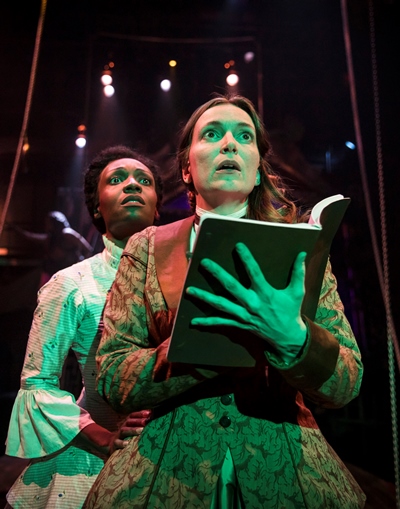 From my perch in the crow’s nest, I observed two things to admire about Lookingglass’ “20,000 Leagues” – Walter Briggs’ earthy and genuine performance as the fearless, willful harpooner Ned Land and one speech by Bandealy’s Nemo that mercifully, albeit oddly, transcends the general pulp that passes for dialogue.

Bandealy, one of Chicago’s most capable actors and the excellent Mr. Starbuck in Lookingglass’ “Moby Dick,” is ideally cast as Nemo. But the part is underwritten, uninspired and mawkish – with one ringing exception that only underscores the insufficiency of the rest. 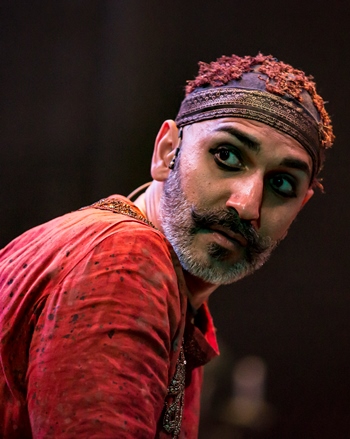 Pressed to explain his murderous prowling of the seas, Bandealy’s spiritually exhausted captain launches into a long crescendo of a rant, railing against forces that destroyed his family and stripped him of his human dignity. It’s a compelling speech, articulate, charged with credible fury and delivered by Bandealy with rasping intensity.

For the most part, however, this show smacks of a tourist lure, an easily digested summer entertainment lightly spiced with Lookingglass’ stock-in-trade acrobatics, tricked out with a clever bi-level set (by Todd Rosenthal) and given a patina of dramatic effect by Christine Binder’s emotive lighting.

Pound for pound, length for length, this take on the Nautilus and its crazed captain can’t hold a whale-blubber candle to the one about the Pequod and its compulsive master. Call me disappointed.