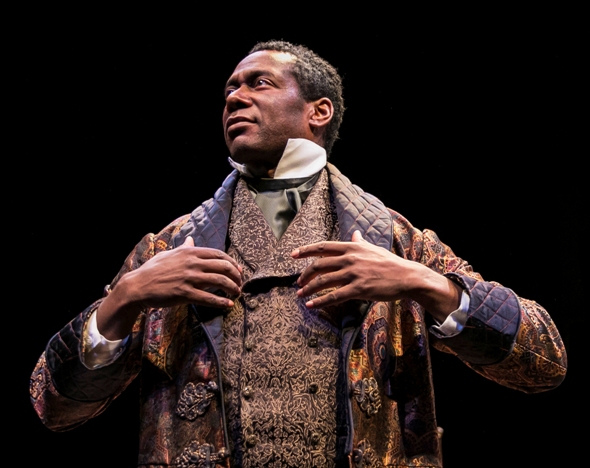 Four hundred years have a way of cosseting Shakespeare’s “Tragedy of Othello, the Moor of Venice” in the cloak of familiarity. Leave it to wily Chicago Shakespeare Theater to find new ways of lodging it under our skin. Back in 2013, CST presented “Othello: The Remix,” about a rags-to-riches rap star violently taken down. And in 2016 we were given Othello as the commander of a modern war, undone by a crafty career soldier maneuvering the system.

Now comes the company’s riveting presentation of British playwright and actress Lolita Chakrabarti’s “Red Velvet” – a high-spirited gloss on the Othello story that’s based on a little-known but true incident from 1833: Free-born American black actor Ira Aldridge provoked the London establishment by toppling its custom of white actors doing the role of Othello in blackface. It would be well-nigh a century before London would see another black actor, Paul Robeson, replicate that feat. 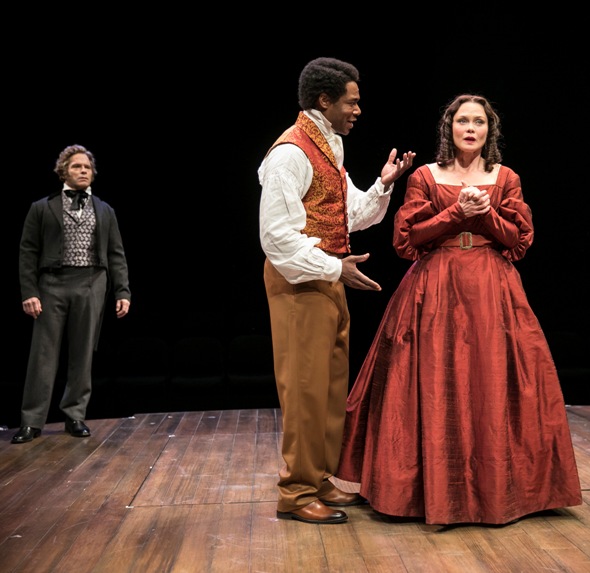 Aldridge might have enjoyed more London fame had he played the magnificent hero in all humility, as it were. This, at least, is Chakrabarti’s cunning take on the incident for dramatic purposes; she’s a playwright who likes her humor dry.

Chakrabarti could not ask for three better actors to bring her bitingly funny scenario to life under Gary Griffin’s whirlwind direction – Dion Johnstone as the dark-skinned newcomer to the Covent Garden playhouse, unhesitatingly assertive and undeniably magnificent in voice and aspect; Michael Hayden as the stupefied rival, studied in his refinement, offended to his core; and Chaon Cross as the baffled leading lady, an artist gamely sincere, a woman transparently disarmed. 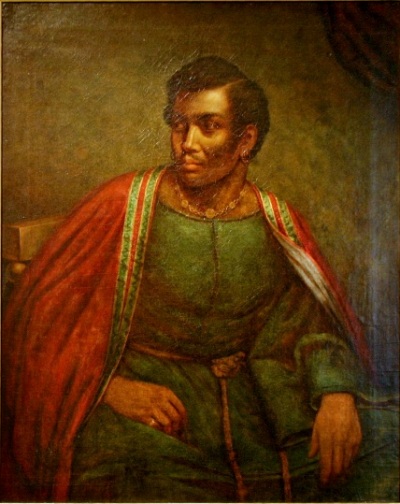 We first meet Aldridge at the imperious age of 60, in 1867, in the Polish city of Łódź, where he is preparing to perform as King Lear in whiteface. But the heart of the story is the flashback by this lion in winter, famous throughout Europe, to a London moment from his youth that still sticks in his craw:

When Covent Garden’s greatest tragedian, Edmund Kean, collapses in the midst of his “Othello” run, the emergency requires the theater to swap in a substitute for the Moorish general who commits a crime of passion against his highborn, fair-skinned wife. Perhaps London might delight in the novelty of a 25-year-old “African” in the title role to save the day, one who is already packing the houses as a leading man in British provinces.

Thus thinks the company’s young French impresario, anyway. Greg Matthew Anderson plays this earnest agent with rose-colored charm. Slavery is to be abolished throughout most of the British colonies this very year, a subject au courant, albeit of robust controversy. One could say the Othello opportunity – properly handled, of course – would be riding a trend.

The reaction of Kean’s stunned son and theatrical heir-apparent Charles, who fully expects to step into the famous role, is – once he is at last able to bring himself to speak – contemptuous ridicule. This boils into high alarm as the jealous and shaken Charles (Hayden is pitch-perfect here) sees Aldridge’s artistic authority actually taking hold. The proud newcomer’s criticism of the stilted declamatory style of his Desdemona, and the electricity in her response to his unapologetic physical directness, is the stuff of big trouble. 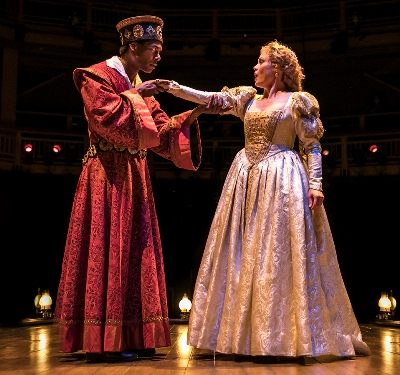 This Aldridge has the ego of a man who sees his talent as destiny. He is not about to be handled. We see disaster’s warnings up close as Aldridge and his leading lady rehearse in view of their colleagues, and then from the stage as they enact the violent handkerchief scene (with jealous Othello man-handling his Desdemona at the peak of literally bruising fury) to their London audience.

In what amounts to a time-shifting quadruple-play, modern actors Johnstone and Cross create the roles of 19th-century actors who are bringing 16th-century Shakespearean characters to life in a tragedy that touches on ancient taboo. The sexual heat erupting from this tour-de-force is tinder to a fire. We watch dark-skinned servant Connie – Tiffany Renee Johnson, in a lovely turn – reacting in protective silence as the inevitable backlash unfolds. But neither she nor any of Aldridge’s increasingly sympathetic colleagues, who respect real theater when they see it, can contain the hostile forces unleashed. 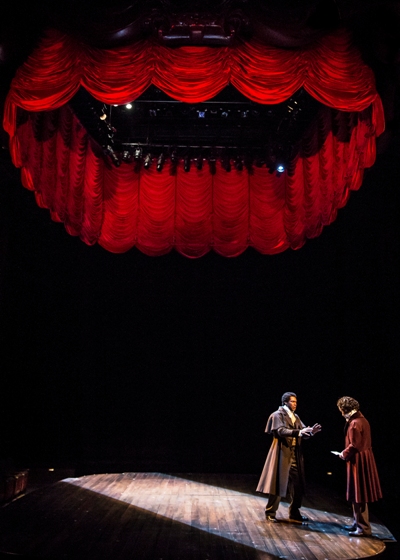 Did rival Charles, in a “Iago” turn, poison the pens of London’s newspaper critics? We may choose to ponder this, but Chakrabarti’s play is no exegesis on Iago. She’s more interested in Aldridge himself and the currents swirling around him – the forward movement and the counterwaves of pushback

I first saw this play at Chicago’s more intimate Raven Theatre stage in 2016, where the reaction of the fraught actors confronted by their awkward circumstance was nicely nuanced. In Chicago Shakespeare’s production, director Gary Griffin loses none of that, while giving us a sense of the grand stakes in the balance as one producer’s impulsive act unleashes an unchecked wave of fury. Scott M. Davis’ scenic design is set off with touches of gilding; a stunning red curtain-in-the-round drops in like judgment from above. Quick-change scenarios hurtle the players against the resisting arcs of myth and human imperfection. 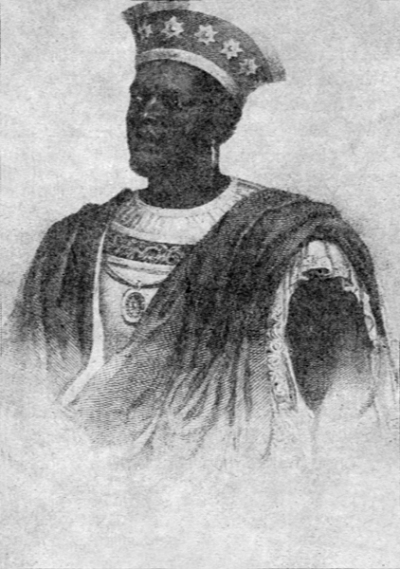 Aldridge’s was an era in which actors still adopted the teapot stance; a black Othello might have seemed too real in certain circumstances. But in fact Aldridge did play Othello successfully – and the great roles of Shylock, Richard III, Macbeth and King Lear, too – mostly in Europe, including Scandinavia and Russia, where he was bestowed honors by many heads of state. Aldridge’s death was front-page news in the New York Times, which noted on Aug. 12, 1867, that Aldridge had been about to embark on an American tour, beginning with his debut at New York’s famed Academy of Music: “Death has prevented the fulfillment of his intention.”

To deal with Aldridge’s European career of eminence, which contrasts with the Covent Garden disaster, Chakrabarti uses a framing device. She writes an opening scene from Łódź, Poland, in the year that Aldridge will die. A novice reporter has crashed her way backstage, blindsiding the cantankerous star in full pre-performance mode. She attempts to extract some details about Covent Garden, invoking high-decibel, bass-baritonal wrath, most of it directed at his long-suffering butler (charmingly droll Roderick Peeples).

Does the structural device work as theater? Not really. But it is nice to be reminded of Aldridge’s historical success at the height of his career. Cracow’s assessment of an Othello in his mid-forties was typical:

“This the first time we have seen a true Othello on the Cracow stage. [His] ugly features, according to the European standard of beauty, became richly beautiful, the sonorous organ of his voice became gentle to a murmur, and his strong eye melted with tenderness. And with that, what confidence and meaningful gestures! At moments of utmost elevation – the fury of a wild beast, but not a scuffle; a howl, but not a shriek in his voice. So must have been Othello when the poet’s genius created him.”