‘Red Velvet’ at Raven: When black actor dares to play Othello, guardians of the theater revolt 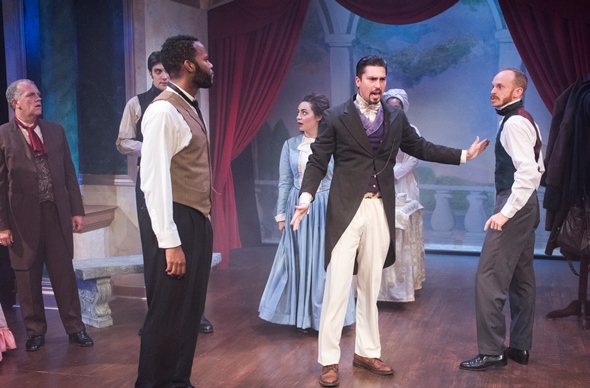 “Red Velvet,” so named for the seductive stuff that covers seats and railings in many a theater, concerns the historical 19th-century African-American actor Ira Aldridge, a major figure on stages across Europe for three decades beginning in the 1830s. Though the play begins and ends in Łódź, Poland, near the end of Aldridge’s life, the story lies in his recollection – his detailed bad dream – of what happened back in 1833 when he stepped in for the famed English actor Edmund Kean as Othello, at no less a venue than London’s Theatre Royal in Covent Garden. 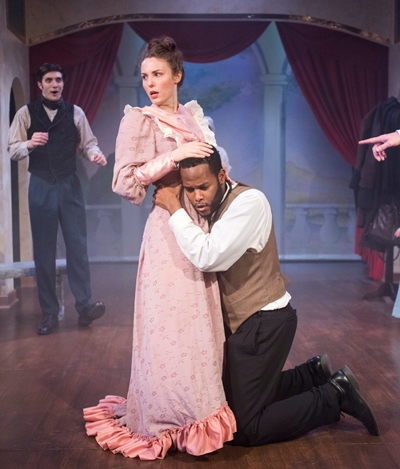 Aldridge (played by Brandon Greenhouse) was already known and admired by London audiences and critics for several black characters he’d played, when he was invited by the French manager of the Theatre Royal to take over as Shakespeare’s valiant and tragic Moor of Venice after Kean fell ill. In this telling, the house manager, Pierre LaPorte (Matthew Klingler) has made the decision entirely on his own and told no one, not even the rest of the cast, whose reactions are mixed indeed.

When Aldridge strides into the rehearsal room, half of his fellow players are mortified. No black man has ever played a Shakespeare lead in Covent Garden. In a scene constructed with electric intensity by director Michael Menendian, the great Edmund Kean’s son Charles (Tyler Rich), who considers himself heir apparent to his father’s theatrical kingdom, fairly boils over with rage – which at least decent breeding forbids him to show openly until Aldridge leaves the room to put on his costume.

But once this black interloper is out of earshot, the gloves of gentility come off and LaPorte is assailed in the most direct terms for his breach of…of, well, judgment: What was he thinking? One cannot have this slave-player, this…this black man…playing Shakespeare’s great Moor. (To which we in the audience may reply in collective silence: Say again?) 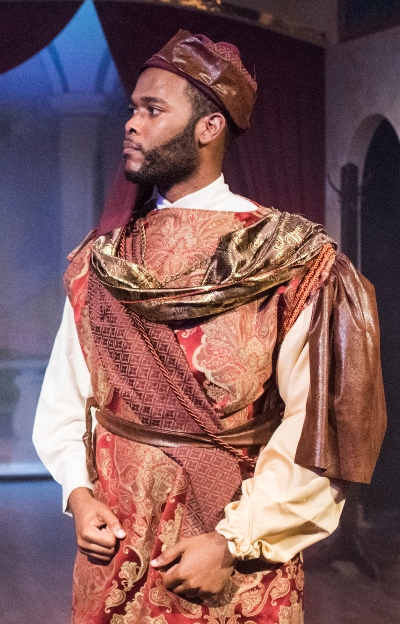 We are not in Chicago 2016, however, but rather in London 1833; and a situation that already looks awkward and volatile is about to turn much worse. Aldridge returns in Othello’s weeds and in Othello’s mindset: patrician, authoritative, and in love with the beautiful blonde Desdemona (Tuckie White). They play their meeting scene, after Othello has sunk the Turkish fleet. Their words are filled with passion, but their gestures — hers, anyway — are stylized. She’s playing to the house; he suggests that she play instead to him, the object of her adoration and longing.

White contours the adjustment perfectly. Like this man in the robes of Othello, White shows us a serious actress who immediately grasps the point and validity of the black man’s concept. In that instant, one could argue, Aldridge ceases to be black for this Desdemona, who now sees him as an exceptional actor serious about his craft. Now, rather than gesticulating at arm’s length, they embrace like the public lovers they are, he kneeling before her, his arms about her waist, his head nuzzled against her.

This is what the London theater-goers and critics are about to witness for themselves. And it is crucial that we see it first – and even more important that we see the reaction by Kean’s outraged son, the embodiment of racist convention at the time. Through Charles Kean’s eyes we behold not just a brazen novelty, but a physical violation. 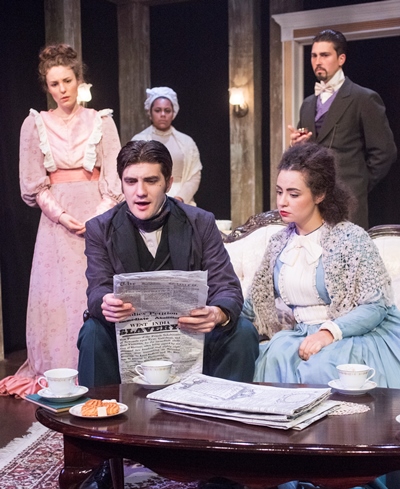 Yet the house manager LaPorte, to whom Klingler brings a disarming air of elegance and conviction, remains adamant, though he cautions Aldridge to ease into the passion a bit. The Londoners will accept a black Othello, he says, but they will need to be brought along by degrees. Aldridge doesn’t know from degrees: How do you occupy Othello’s skin, feel his jealousy, tower in his madness by degrees?

When the inevitable finally happens, when the public revolts and the critics heap racist derision on Aldridge, and the directors of the Theatre Royal bring LaPorte to heel, the actor, as proud as Othello – and perhaps no less self-destructive – turns hotly on his best ally in a protracted face-down that’s as fiercely acted as it is smartly written.

I’ve said little about the playwright’s skillful bookending of Aldridge’s London debacle. The opening in Łódź, where we first see the seasoned – and now quite imperious – actor, lends credibility to what follows in flashback. Here, it also established Greenhouse’s authority in the role. In rebuffing the urgent appeals of a young Polish reporter (Sophia Menendian), Greenhouse conveyed the actor’s lifetime as a road warrior, a man who has answered every question a thousand times and who assuredly has no intention of revisiting that long-ago ugliness in London.

The ending, again in Łódź, reveals a more profound present reality. Once more, this venerable prince of players is about to go on stage – but not as the bold Moor. Now he will act a king, a frail and forsaken one, who rails against his fate, against the stormy beat-down of an unjust world.