‘The Minutes’ at Steppenwolf: At a small-town council meeting, comedy takes shattering turn 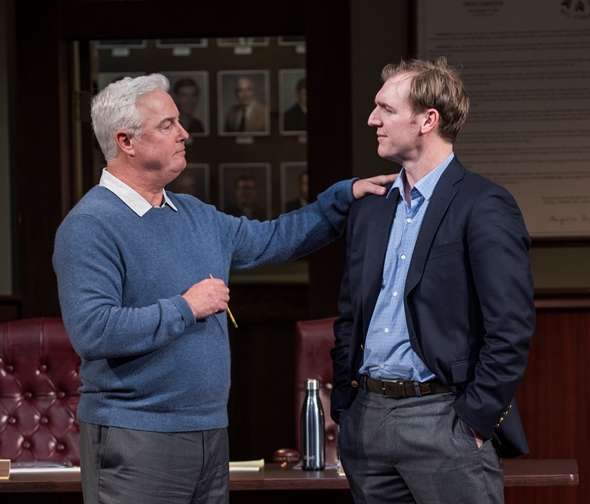 The individual agendas of the Big Cherry village council members, in Tracy Letts’ comedy-chiller of a new play “The Minutes,” are credibly various and amusingly personal. What really resonates, however, is the one thing they all hold in common — a raw, elemental conviction that safeguards and perpetuates their community. 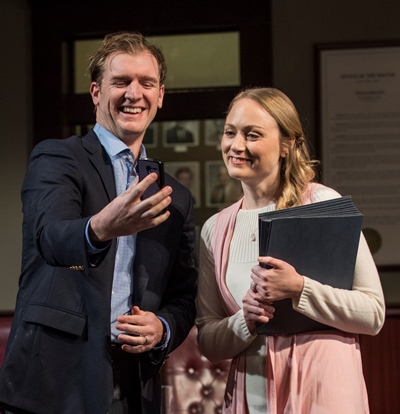 That commonality would not be obvious to a newcomer like Mr. Peel (played by Cliff Chamberlain with ruddy openness and expectation). A recent arrival in Big Cherry who decided to run for a council vacancy, and got elected, Peel now finds himself playing both social and political catch-up as the council’s fresh face.

Peel’s learning curve has grown steeper since he had to miss the previous week’s council meeting because of the death of his mother. Something happened at that session that no one seems willing to explain to him in plain terms.

He notices that councilman Carp is missing this week. Oddly enough, none of his fellow councilmen will say much about Carp, either, or why he may be absent. And there are no minutes to consult from last week’s meeting. There will be minutes, Peel is assured, but they’re not yet ready to be submitted for council approval. This makes no sense to the newbie, but he doesn’t want to overstep himself, so he settles in for new business. 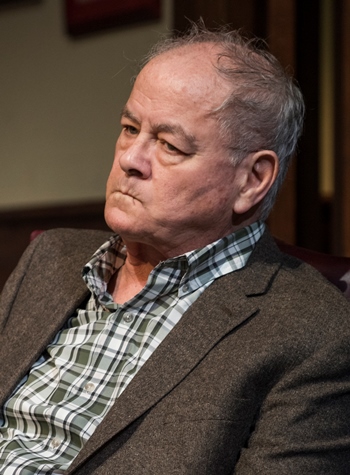 To the dubiously attuned mind of the council’s longest-serving member, Mr. Oldfield (Francis Guinan, marvelously distracted even as he is keenly focused on his one big issue), the first matter of business should be to decide on a procedure for determining who gets the parking space newly available next to city hall. At the moment, he – despite his long years of service as councilman – parks some distance away. Just saying.

After some weightier items have been considered in discussions that occasionally veer into physical confrontations, Mayor Superba (William Petersen in a performance of calm authority redolent of civic righteousness) comes to an agenda item of keen interest to all: Big Cherry’s annual festival celebrating the heroism of a handful of brave men who once saved the town from a band of marauding Indians. Nothing in Big Cherry community affairs outranks this hallowed tradition.

When Peel confesses that he doesn’t know the story, several councilmen spring to their feet to reenact that historic event. But Peel isn’t so much impressed as amused, and skeptical. He points out logical flaws. This has to be an embroidered tale, he insists, the romanticized stuff of legend.

Amid the edgy debate, missing councilman Carp’s name pops up again. By now Peel’s reluctance to step on toes has vanished. He presses a key point and gains a critical advantage. 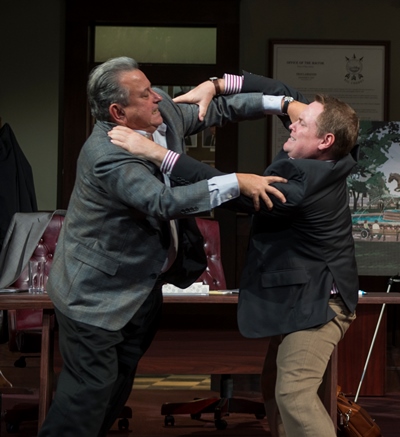 Here it becomes a bit tricky to talk about Letts’ neatly constructed, somewhat surreal and decidedly frightening play without exposing too much. And yet to give credit where it is crucially due, let’s just say councilman Carp (Ian Barford) resurfaces – and offers quite a different perspective on the “historical” preservation of the town of Big Cherry, and even of how the community got its name. Barford’s extended monologue, delivered in the pain of an appalled mind and broken heart, is the rhetorical high point of this enterprise.

I specify rhetorical because there is a still more astonishing, albeit less articulate, flourish to come. I think ghastly might be a useful single-word descriptor. But that revelation, in truth the play’s essential raison d’etre, lies beyond the proper scope of a review. To be sure, the discerning, rational Peel now gets a stark picture of history through the lens of the Big Cherry fathers – in vivid color.

In a twinkling, Letts’ comedy mutates into something hideous but very real and recognizable. It is a mirror in which we see ourselves, darkly. Mayor Superba, so well named, calmly lays it out to Peel: the way things are. The inexorable truth about life’s little details, like your SUV or something as unremarkable as the thermostat in your home. Or the warm, safe bed in which your child reposes.

If “The Minutes” falls somewhere between political theater and “The Twilight Zone,” its appeal as a story about real people is ensured by a council full of distinctive characters, a spirited ensemble adroitly meshed by director Anna D. Shapiro, who is also Steppenwolf’s artistic director. Letts’ increasingly taut dialogue speeds along through a 100-minute sweep with no break. And I loved set designer David Zinn’s imposing, stage-wide arc of government-size desks – metaphorical bulwarks against the encroachment of historical veracity. Behold the fortress walls of a truth spun in the service of manifest necessity.