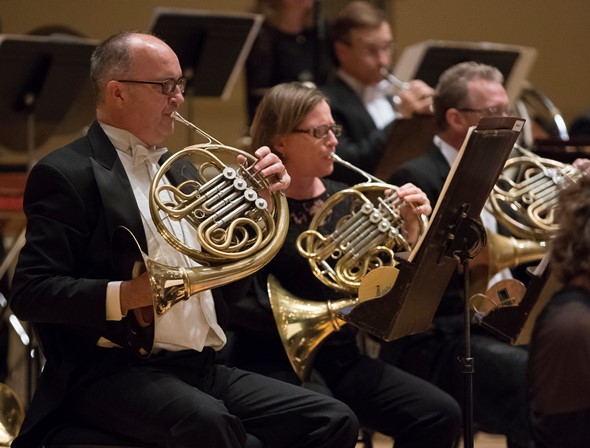 In a word, the Chicago Symphony Orchestra has opened its 2017-18 season with a two-week residency by music director Riccardo Muti that might be fairly summarized as splendorous.

I caught up belatedly with the first week’s fare – a spritz of modernism in Penderecki’s “The Awakening of Jacob,” soloist Anne-Sophie Mutter’s spell-binding flight through the Tchaikovsky Violin Concerto and Muti’s revelatory account of Schumann’s Second Symphony — then two nights later heard the program that continues through Oct. 1: the world premiere of CSO resident composer Elizabeth Ogonek’s alluring “All These Lighted Things” and perhaps the greatest performance of Bruckner’s Fourth Symphony that I’ve witnessed in 50 years as a critic. 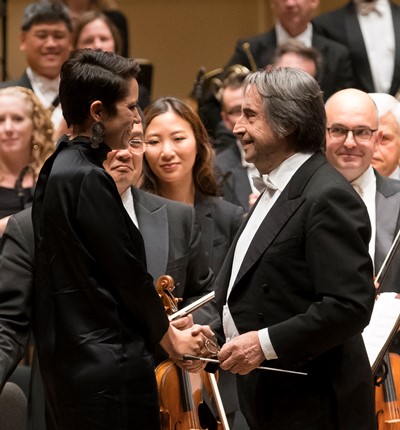 Ogonek’s quite specific movement headings characterize what reaches the ear: 1) Exuberant, playful, bright; 2) gently drifting, hazy; 3) buoyant. There’s also a kind of mystic symmetry to the experience as a whole. The opening dance wafts into audibility through a shimmering of percussion and the closing episode melts away in a gentle percussive flourish, like a fracturing of starlight.

Between points, “All These Lighted Things” explores a largely tonal landscape, employing vibrantly syncopated rhythms and a lush orchestral palette to engage the mind and quicken the spirit. Muti and the CSO offered a performance at once keen edged and indulgent. My guess is that Ogonek’s little dances will have a big future with orchestras far and wide.

Muti and company opened the concert with a lustrous and ultimately crackling performance of Rossini’s “William Tell” Overture. When it was over, the maestro addressed the audience to remind all that the work’s rousing and very famous final Allegro expresses heroic revolt against a despised dictator – and has nothing to with the Lone Ranger. Well, 320 million Americans hear it differently. It’s in our cultural DNA. Sorry, Ke-mo sah-bee, but that’s just the way it is. 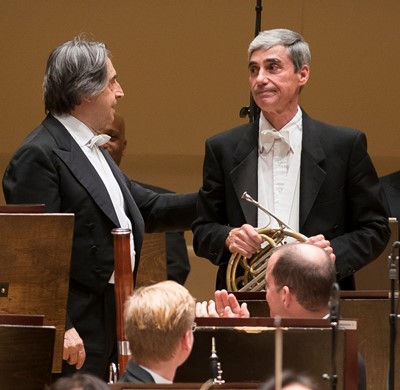 When Muti is on the podium, the most familiar masterpieces tend to transmogrify into revelations. So it was with Bruckner’s Symphony No. 4 in E-flat (“Romantic”), which crowned the season’s first two weeks. Muti’s account was both spacious and specific, grandiose and intimate, and the Chicago Symphony responded with an all-around performance that bore out Muti’s frequent comparison of this band with the Philharmonics of Vienna and Berlin.

High praise could start with any section, but one might do no better than follow Muti’s lead and single out the French horns. Actually, he did more than that: Before acknowledging anyone else, the maestro hiked all the way around to the back of the orchestra and laid of beatific hand on the shoulder of acting principal horn Daniel Gingrich. It was an accolade richly earned. The heaven-seeking salvos that punctuate the Fourth Symphony emanate substantially from the horns, notably the first among them, and Gingrich led a collectively magisterial effort. 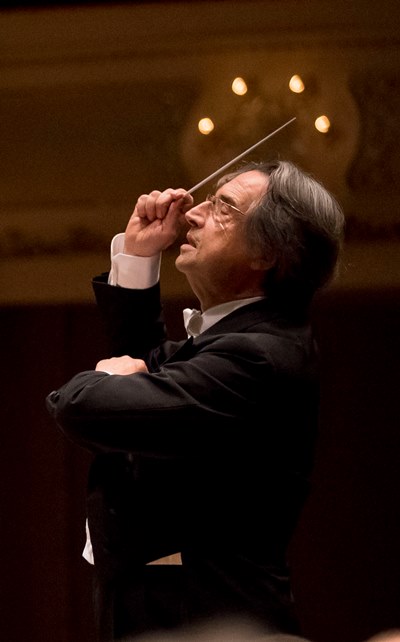 Though the Fourth runs more than an hour, Muti was from the outset in no hurry. His expansive mindset told in arms raised broadly over his head as if to illustrate the essential grandeur in effect here. Muti’s patient – I’m loath to call it slow – tempo brought to mind the monumental example of Otto Klemperer. Bruckner’s cosmic lyricism never lost its tension, its tensile strength. Here and in the delicately voiced sublimity of the ensuing slow movement, Muti elicited an interplay of woodwinds – led by flutist Stefán Ragnar Höskuldsson – that suggested both prayer and the heavens’ starry dome.

A devout Catholic, Bruckner dedicated his music to the glory of God much the way the Lutheran Bach did. His symphonies are cathedrals. Where Mahler constructed worlds in the earthly sense, Bruckner wrought images of divinity in all its incomprehensible transcendence. Thus, typical of Bruckner, the Fourth contrasts finely brushed Schubertian songfulness with heart-stopping sunbursts of sound. Yet even those eruptions surged up with no loss of technical finesse or timbral beauty. Everywhere in this stupendous performance, the CSO strings played with equal parts power and gossamer fragility.

Muti has now conducted the CSO in Bruckner’s Fourth, Sixth, Seventh and Ninth Symphonies. Just as Georg Solti turned the CSO into a great Mahler orchestra, Muti has done no less with Bruckner. It will be a signal part of his legacy here. 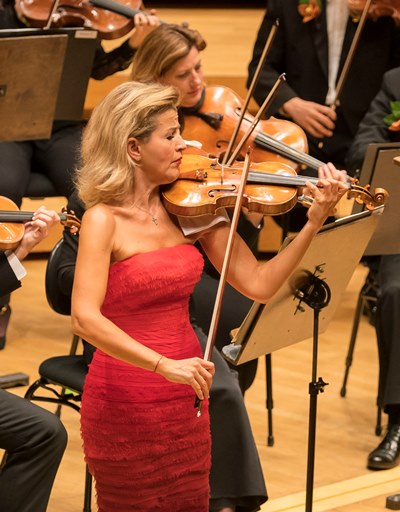 Only on a scale of sheer size was Muti’s reading of Schumann’s Second Symphony, the week before, anything less. And it was a testament to the CSO’s adaptability that it captured so well the animation, textural transparency and red-blooded joy that permeate Schumann’s exquisitely wrought Second. Here was performance of Mozartian clarity wedded to Mendelssohnian exuberance – essential accents in the distinctive voice that we recognize instantly as Schumann’s.

Muti opened that first program – and thus launched the season – with Penderecki’s swirling, harmonically wayward “The Awakening of Jacob,” from 1974. This concise tone poem unfolds in waves and layers of sound fashioned largely around the strings, and the CSO’s fine ensemble delivered it as if the elusive harmonies were the natural language of lyric poetry.

Which brings me to Mutter’s thrilling turn through the Tchaikovsky concerto – an amalgam of speed, precision, strength and grace. The CSO was right there with her, zooming one moment, sighing the next. Heady stuff, topped off by a ripping finale that perhaps Mutter took so fast just for the crazy fun of it. Muti and the gang likewise made this dash seem like a normal gait. If it was all just because they could – well, indeed they could.