‘Ragtime’ at Griffin: When America’s dream was young and promise came with an asterisk 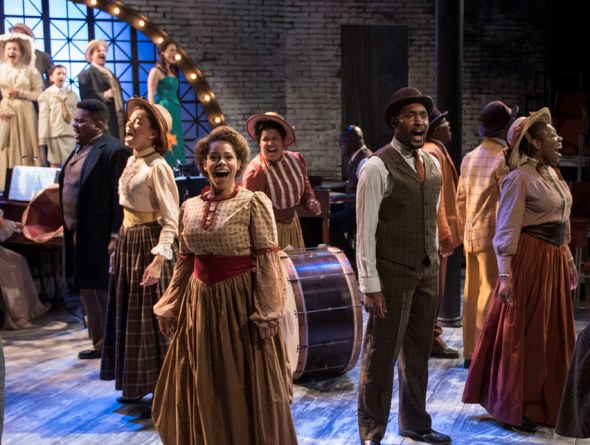 It’s hard to say which to praise first or most about Griffin Theatre’s splendidly intimate reduction of the musical “Ragtime” – the brisk, focused, wholly involved work of the 20 actors in the ensemble, the credible and affecting performances in the three central roles central or the imaginative achievement of director Scott Weinstein.

Slice it however you may, Griffin’s small-scaled but high-powered “Ragtime” is a theatrical experience not to be missed. 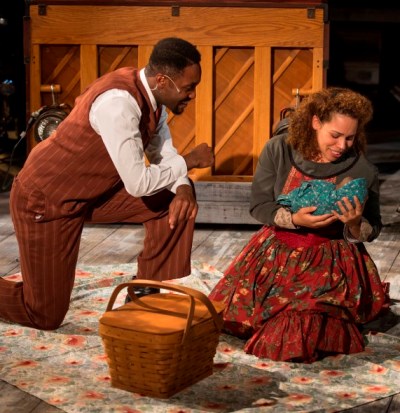 Based on the novel by E.L. Doctorow, “Ragtime” is a story of the great American dream as seen by three people consigned to the social periphery, but who gain at least a share of hope through pluck, luck and legacy. It’s also the story of an age, the opening years of the last century, an era defined by a vision of boundless possibilities and accompanied by the sensuous pulse of ragtime music.

Coalhouse Walker Jr. is an African-American piano player with high aspirations and a fine new car – at a time when just having an automobile was an emblem of success. But being black also means his car will become a target of hatred, which in turn distorts his decency and his dreams into tragic anger.

Tateh is a poor Jewish immigrant just off the boat. His wife has died, leaving him with a young daughter to care for. She is the jewel of his life and he is resolved to provide her with the full bounty of this new land. Tateh’s trade is making silhouette portraits. One day he makes for his daughter a little book filled with images that seem to move when the pages are flipped rapidly with the thumb. It changes his life. 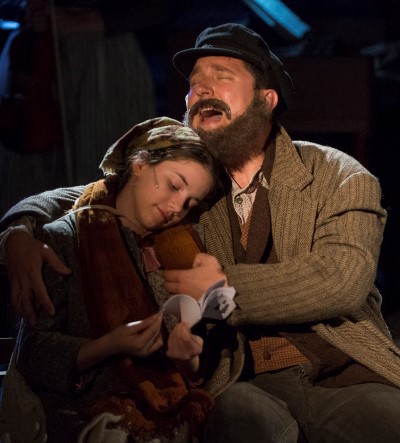 Mother (her only name) is white, married to a man of means who’s often away on adventures. She remains at home to care for their young son. In her ample isolation, the world is Mother’s oyster, except that, as she is a woman, it’s an oyster by permission. Then one day, while puttering in her flower garden, she finds a newborn baby – a black child, and nearby the mother is caught by police. Generous-hearted Mother takes them both in. Turns out the father is Coalhouse Walker, who comes to call. You can see where this might be headed.

But don’t forget Tateh. Which is not likely to happen here anyway, given the luminous performance by Jason Richards, whose every scene unfolds as an moving testament to the fiery spirit of a man for whom poverty is but a temporary condition, a prelude to some unforeseeable advantage. When that big break comes, Richards transforms Tateh’s ragged nobility to a better-fed but no less charming version, now complete with a baronial title. 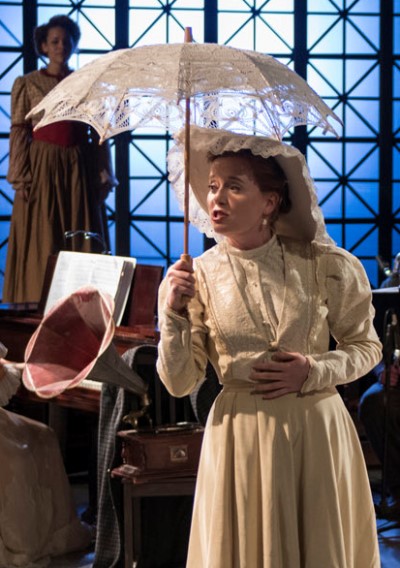 Laura McClain’s Mother is a radiant soul that cannot be contained by the walls of her home or the constraints of her life. If Mother knows her place, as it were, she also knows her own heart, which is both a repository of compassion and a stronghold that’s deceptively vulnerable. McClain offers an irresistible melding of gentleness and need.

Yet the engine that drives “Ragtime” is the proud figure of Coalhouse Walker, a man of high principle, a pianist of uncommon talent and a guy devoutly in love with the mother of his new son. Denzel Tsopnang cuts a tall, upright, indeed forthright Coalhouse whose moral fiber only toughens as his losses pile higher.

Playwright Terrence McNally’s adaptation of Doctorow’s novel is a model of dramatic concision, and Weinstein’s taut direction keeps an intricate story spinning forward. So well integrated are the musical numbers, both the big ensemble productions and the songs of personal reflection, that it’s easy to lose sight of where speech ends and lyric flight begins. Griffin’s show enjoys a vocally solid cast of skilled actors. Matt Deichtman has adroitly distilled the original orchestration to the care of just two pianos (Jermaine Hill and Ellen Morris) and clarinet (Dan Hickey) – though several of the actors occasionally pick up a violin, flute or other instrument.

The very texture of time and milieu is invoked jointly by William Boles’ uncluttered set design, Rachel Sypniewski’s period costumes and Alex Ridgers subtle lighting. It’s a clever, resourceful show: A piano becomes Coalhouse’s beautiful car, which he tirelessly polishes — and which a bunch of bigoted white thugs ravage before our eyes. Oh, yes, we see the ruin they wreak. We see what an imaginary crowbar can do to a spinet-as-gleaming automobie. Like Coalhouse, we see it with sickening clarity.