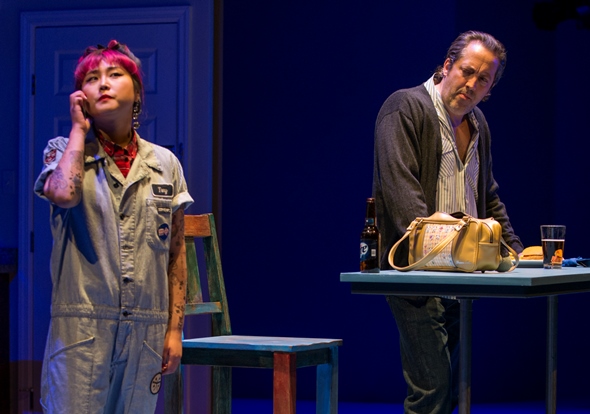 Wheeler, the only name he goes by, is a smart guy, a good photographer and his own worst enemy. He’s the case study in self-destruction at the center of Tracy Letts’ new play “Linda Vista,” now headed into the final week of a crackling production directed by Dexter Bullard at Steppenwolf Theatre.

To say that Wheeler — played with barbed comic timing and ruinous ferocity by Ian Barford — sees the world through a personal lens would be a rash understatement. A devout narcissist, he imagines himself astride the world, or indeed like Jupiter above it, taking the measure of all the things and people in it and finding that people mostly don’t measure up. 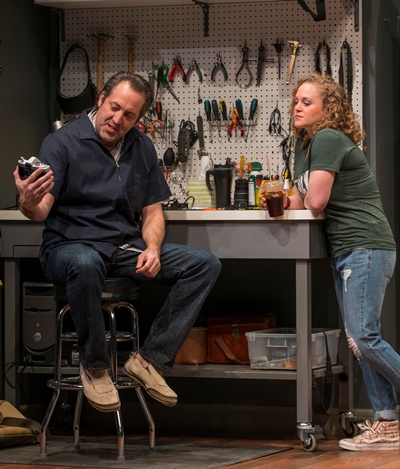 He’s not unlike Henry Higgins, the superior, oblivious master of English dialects in “My Fair Lady.” Except that where Higgins ponders why a woman can’t be more like a man, Wheeler all but asks aloud, “Why can’t everyone be more like me?” Letts’ self-styled cock of the walk shares something else with Higgins: an utter blind spot where the sensibilities of others are concerned.

But now we come to the difference: Where the socially blindered scholar of “My Fair Lady” is quite comfortable in his own skin, content in his self-knowledge, Wheeler hasn’t a clue about himself. This man of brutal wit, so assured in his ironic observations and lacerating dismissals, turns out to be a lost soul: his marriage failed, his teen-age son a stranger to him, his latest sexual partners mere proofs of his manhood, one promising match casually cast aside for greater, wilder, younger proof.

The graphically suggested sex in “Linda Vista” is raw, the converging bodies naked and frontal. (Steppenwolf recommends the show for ages 18 and up.) But rather than salacious or sleazy, these hook-ups are funny and desperate and sad. Wheeler uses women, even if he doesn’t see it that way, but when the tables turn on him, he’s left shattered, bereft and reeling.

That’s just one more irony of the title. Linda vista is Spanish for beautiful view. Newly split from his wife, Wheeler is moving into an apartment complex called Linda Vista when the play opens. His bachelor pad has an ocean view, anyway a narrow ocean view, or more like a sliver of one – if you stand in just the right place.

We get a riotous first impression of Wheeler as he hauls boxes full of his stuff into his new digs, helped by his good buddy Paul (Tim Hopper as a delectably dry straight man). Wheeler’s anger leaks out in every direction, and Barford spews it with acid intensity. He will not brook fools (never mind gladly), and the world around him is populated by little else, a barely educated lot with no appreciation of art or intellect, a confederacy of dunces who actually put that pussy-grabbing idiot in the White House. (This brought tepid laughter and some applause at the performance I attended – perhaps the response of exactly half the house, plus a few.) 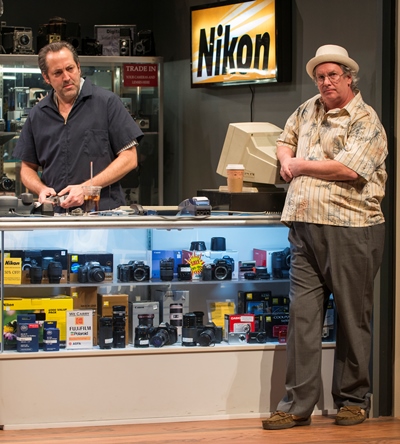 Things could be worse for Wheeler. At least he has a job. Whether he has burned out on photography or only lost his confidence is never quite explained, but he has abandoned the creative side and taken a job in a camera shop. He works for a depressed owner (Troy West), who constantly salivates over an attractive young female employee (Caroline Neff). It’s funny until the mix of saliva and allure explodes into Wheeler’s moment of truth.

That’s a commodity acquired slowly by Barford’s volatile, impetuous, doggedly self-centered man-child, and it comes at great cost to those around him – especially two women who cross his path at the high pitch of his personal crisis.

While these chance encounters happen at almost the same moment, they play out quite differently. Jules (Cora Vander Broek) is a blind date set up by Wheeler’s pal Paul and his wife (Sally Murphy). Wheeler and Jules hit it off – despite his uncertainty about her profession as a “life coach” – and soon move in together. They seem to be in love, like two adults both pretty sure of what they’re looking for. Vander Broek’s level-headed, practical but enthusiastically sexual Jules is just the stabilizing influence Wheeler needs.

But meanwhile, at a bar, he happens onto a street-wise young Vietnamese export called Minnie (played with spiky independence by Kahyun Kim). They are oil and water; mostly, this rough-hewn girl annoys Wheeler. A short time later, however, in the dead of the night, Minnie shows up at his door with her worldly possessions in a laundry basket, seeking asylum from her abusive boyfriend. Sure, sure, of course. Wheeler can’t let petite Minnie go back to another beating. We need both Freud and Jung here. It’s a clear father-daughter thing that morphs – or descends – into something else altogether. Right under Jules’ nose. (I couldn’t help thinking of Willie Nelson’s imperishable line: “Now, baby, are you gonna believe what I’m about to tell you or what your lyin’ eyes just saw?”)

About the time Wheeler, who has made his remarkable choice between the two women, is convinced there really is a Neverland, he’s rudely awakened by a double blast of reality. Boom. Followed by Boom. The last words of the play are his, and he speaks them softly, deferentially. In the chastened tone, one might infer, of a penitent.