‘The Perfect American’ at Chicago Opera: Portrait of Walt Disney, animated but imperfect 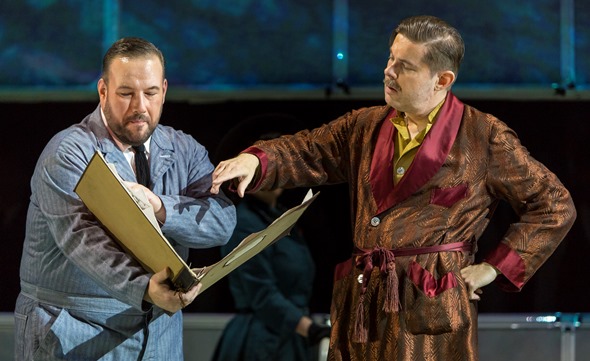 Review: “The Perfect American,” music by Philip Glass and libretto by Rudolph Wurlitzer, at Chicago Opera Theater through April 30. ★★★

While the results were mixed, it’s not hard to understand what drew the Chicago Opera Theater to “The Perfect American,” a merger of two well-known, quintessentially American artists – composer Philip Glass and famed cartoonist, filmmaker and theme-park pioneer Walt Disney. Adding appeal are appearances by Andy Warhol and Abraham Lincoln, who returns in the suggested form of a yet-to-be-completed animatronic figure (realized here by puppet designer Sean Cawelti) and even a reference to Ronald Reagan, then governor of California.

Glass, whose 80th birthday is being celebrated across the classical music world this year, has to be included on any list of today’s most important operatic creators. In addition to “Satyagraha,” “Einstein on the Beach” and “Akhnaten,” which have become contemporary classics, he has composed more than a dozen other works in the form. “The Perfect American” premiered in 2013 at the Teatro Real in Madrid, Spain. Chicago Opera Theater presented the work’s Midwest premiere, a co-production with the Long Beach (Calif.) Opera, on April 22 at the Harris Theater. A second and final performance will be given April 30. 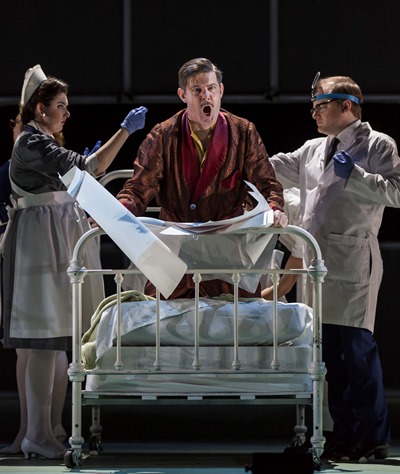 The opera focuses on the last three months of Disney’s life as he agonizes over his impending death and looks back at his career and childhood, especially memories of his hometown, an idyllic Marceline, Mo., which clearly was the inspiration for Main Street U.S.A. at Disneyland.

The libretto by Rudolph Wurlitzer is based a novel of the same title by Peter Stephan Jungk. It teems with questions about who Disney was and what his ultimate legacy is, and those issues in turn raise larger philosophical questions about what it means to be an American. Was Disney the racist, misogynistic, right-wing megalomaniac who testified before the notorious House Un-American Activities Committee? Or was he a beneficent visionary, a kind of entertainment messiah who drew on his folksy heritage to create a utopian paradise known as the Magic Kingdom?

In short, was he a perfect American or more of an ugly American? At intervals throughout this opera, a church-like chorus intervenes, with mystical odes to dreams that never end and sunny values like faith and hope. Are we to take in these dictums literally or are they dipped in irony or perhaps even sarcasm? 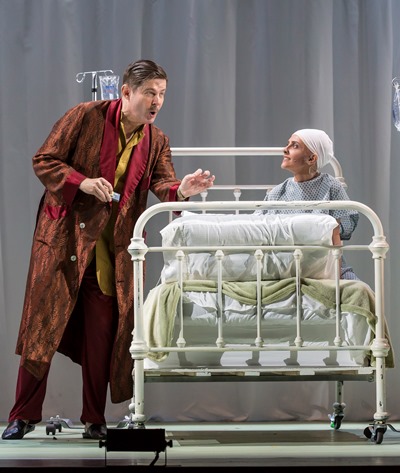 In the end, Glass and Wurlitzer seem to take the more positive view of Disney. Certainly, an encounter that he has with a young cancer patient and Disneyland fan named Josh toward the end of the second act, in which they discuss their respective illnesses and do animal impressions, is meant to soften impressions of him. But there are no obvious answers to these questions, and that seems to be the point.

The problem with the libretto is that these competing elements often seem disjointed and sometimes superficial. As witty as the appearance is, for example, of Andy Warhol at the beginning of Act 2, what does it really contribute? He expresses his admiration of Disney to his brother Roy, but never interacts with him. There is a repeated reference to an owl that Disney killed as a child. It is supposed to become something of an omen of death or illness, reappearing at one point as a neighbor girl’s mask, but this attempt at symbolism seems clumsy and heavy-handed.

Perhaps the biggest problem is that there is no real emotional core to this opera, and the libretto deserves much of the blame. While there are moving moments, such as the encounter between Disney and fan Josh, too often the opera raises issues that engage the mind but not so much the heart. We never connect with Disney on any deep human level, and there is no sense of an emotional journey like the kind experienced in an opera about another problematical historical figure – “Nixon in China.” 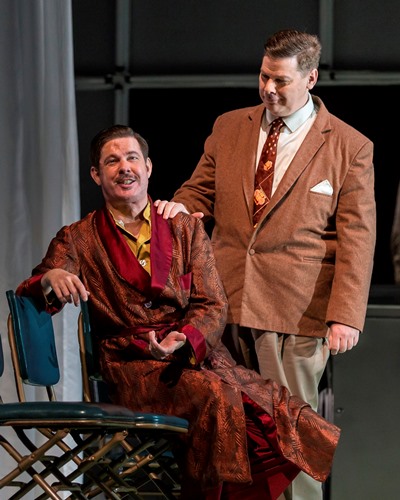 It might have helped if some of the other characters had been given more of a chance to reveal their inner feelings. What was Disney’s wife feeling during all this? We really don’t know. We do get some exposure to an ex-employee named Wilhelm Dantine, who tried to organize a union and was fired, but even the treatment of this character seems truncated.

Kevin Newbury, a nationally known director who staged Lyric of Opera of Chicago’s production of “Norma” earlier this year, tries to transcend the shortcomings of this libretto and to some degree succeeds. As he explains in his program note, Newbury employs what he calls a “nonlinear, phantasmagorical” approach that makes sense for an opera that is much more about memories and ideas than action and plot. Particularly successful is his idea of showing Disney creating a castle with bottles and boxes in his hospital room and projecting the image on a curtain like shadow theater.

As a final, poignant tribute to Disney, the ensemble assembles such a castle and Josh turns on the light to complete the project. But at times Newbury’s super-charged staging becomes overwhelming in its busyness.

Although the libretto shifts some scenes to Disney’s home and studio, all the action here takes place in his hospital room, a tack that befits Newbury’s overall conception but still can be a bit confusing. In Zane Pihlstrom’s scenic design, the setting is largely evoked by a bed, medicine cabinet, sliding white curtain and some large medical lights overhead. The backdrop is a gridded panel (outlined with the cold white lights associated with hospitals) that serves as a screen for the production’s ever-changing projections. These images can be helpful, but it can be argued that photographs of actual trains and small-town Main Streets are too literal and wind up limiting the audience’s ability to fill in the details with their imaginations. 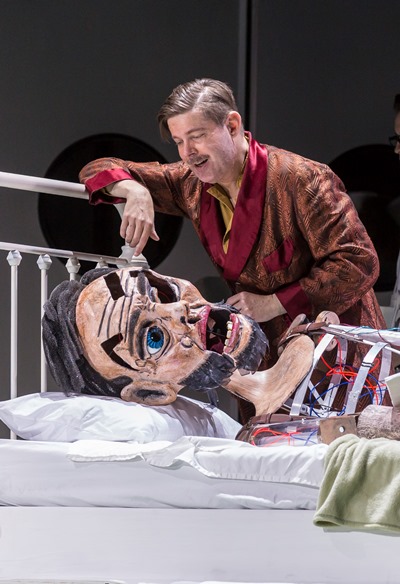 Making the libretto’s weaknesses even more apparent is Glass’ entrancing score. It is sometimes upbeat and even playful, yet more often tends toward the melancholic, mournful and ominous with an emphasis on the lower orchestral voices such as the bass and contrabass clarinet.

While this music has some of the minimalist iterations and tonal progressions that have long been a prominent part of the composer’s music, it goes much further, serving up some of Glass’ richest and most complex writing. It includes some surprisingly straightforward melodic statements and an evocation of a train that comes across as a very un-Glass-like Broadway show tune. Enriching the score is a phalanx of percussion ranging from the glockenspiel and castanets to the triangle and temple blocks. Particularly notable is the the anvil, with its hauntingly dull ringing effect.

The score was vividly realized by an ample, 40-member pit orchestra led by the company’s artistic director, Andreas Mitisek, who never allowed the production’s energy and pacing to flag. Prepared by music director Stephen Alltop, 28 members of Chicago’s Apollo Chorus, a concert ensemble that proved to be a first-rate opera chorus, turned in a committed, compelling performance.

The cast is strong across the board, starting with baritone Justin Ryan, who threw himself into the lead role with gusto. He showed himself to be a fine all-around singer with a full, resonant voice, as well as an expressive actor who was able to navigate the many contradictions of this character. He was effectively matched by Zeffin Quinn Hollis, another big-voiced baritone, as Walt’s brother Roy.

Scott Ramsay, whose tenor voice possesses an appealingly floating, slightly sweet-tinged quality, made the most of the under-defined character of ex-employee Dantine. Perhaps the biggest revelation of this production was soprano Rana Ebrahimi, who portrayed the two child roles, bringing a wide-eyed, youthful innocence and an affecting treble-like vocal quality to Josh.