From Lyric Opera stage, pair of stars launch into a swinging orbit around the world of song 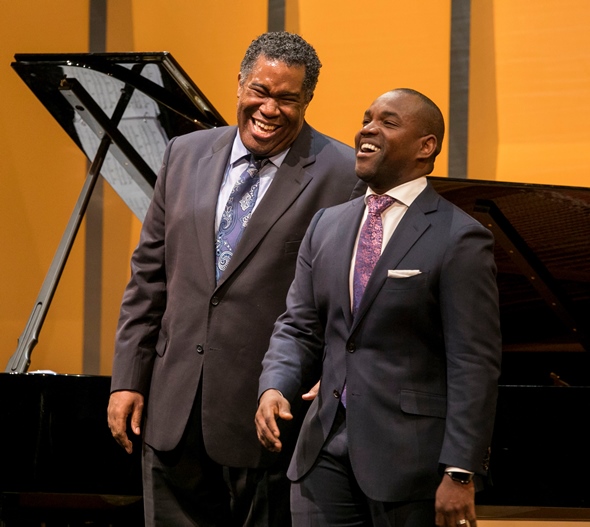 Musical artistry at 360º was on display April 9 at the Lyric Opera of Chicago in a joint recital by tenor Lawrence Brownlee and bass-baritone Eric Owens, with the marvelously adroit Craig Terry at the piano. 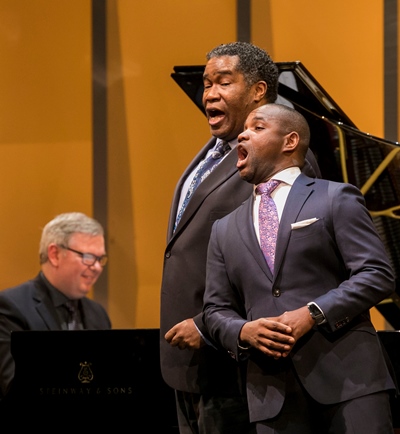 Owens is by now a giant of the international operatic scene and his recent role debut as Wotan in the Lyric’s new production of Wagner’s “Ring” cycle was a revelation even in light of his groundbreaking portrayal of Alberich in the Met’s “Ring” a few seasons ago. Brownlee is quickly joining him in the upper echelons of the operatic world after establishing himself as one of the go-to tenors for the exceedingly demanding bel canto repertoire, from Rossini’s “La cenerentola” (seen at the Lyric in the 2015-16 season) and Donizetti’s “L’elisir d’amore” to Bellini’s “I puritani,” an opera in which he’ll be at the Lyric in the upcoming season opposite Albina Shagimuratova.

Both Owens and Brownlee are equally devoted to new opera, and they often take part in non-traditional works that strive to widen the audience for classical music. Brownlee was recently seen in Chicago as jazz saxophone legend Charlie Parker in the chamber opera “Yardbird,” while Owens starred in the acclaimed Met production of Kaija Saariaho’s “L’amour de loin.” And as they two singers showed their vast, enthusiastic and refreshingly diverse audience on April 9, a broad and deeply felt repertoire of spirituals, traditional songs and Broadway favorites is at their fingertips, as well. 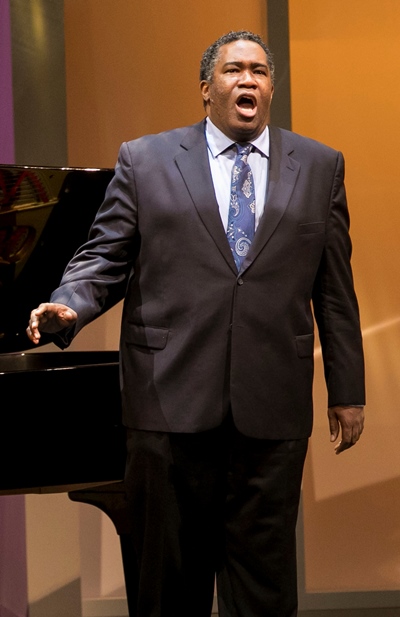 Owens is guided in his performances by a deep musical intelligence and understanding of the dramatic roles he inhabits, to which he confers the gift of a voice as agile and malleable as it is lustrous and shimmering in its warm, dark tones. After Mozart’s affecting concert aria “Così dunque tradisci,” sung with elegance and restraint, he took on the complex role of Silva in Verdi’s “Ernani” with the pensive aria “Infelice! E tuo credevi” and then dug deep into Mephistopheles’ menacing bravura aria “Le veau d’or” from Gounod’s “Faust.”

For his part, Brownlee possesses a round and brilliant tone and perfectly positioned, effortless high notes that shone in his thrilling rendition of Tonio’s aria from “La fille du régiment,” with its breathless series of repeated high Cs. This used to be Luciano Pavarotti’s standard fare, but Brownlee makes it fully his own. At the other end of the spectrum, he fully embraced the lyrical delicacy and long melodic arches of Nemorino’s “Una furtiva lagrima” from Donizetti’s “L’elisir d’amore” (slowed down just a little too much in the over-expressive piano accompaniment), and the glorious beauty of Nadir’s “Je crois entendre encore” from Bizet’s “The Pearl Fishers.” 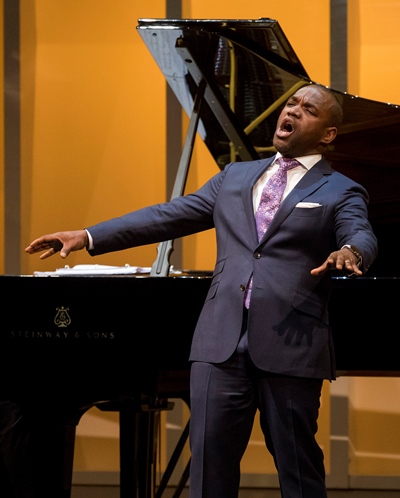 Together, the singers brought to life the delightful comedic duet between Nemorino and Dulcamara, “Ecco il magico liquore,” with Owens venturing with gusto (and taste) into a repertory that is not customarily his own but that brings out his considerable comic vein. Tenor and bass-baritone fittingly concluded the program’s first half with the stirring “Pearl Fishers” duet “Au fond du temple saint,” their gorgeous voices melting in dreamy recollection of the beautiful Leila and the reaffirmation of their bond of friendship.

On offer in the second half of the program was a vast panoply of beautiful tunes in which the two voice could shine: traditional arrangements of spirituals, from “Deep River” to “Give Me Jesus,” American songs from “Dolores” to “Lollipops and Roses,” more spirituals artfully arranged by Craig Terry, all the way to the rousing duet “Every Time I Feel the Spirit.”