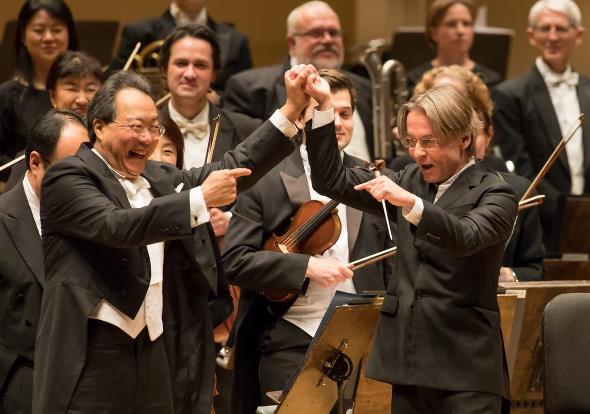 As the audience packed into Orchestra Hall whooped its enthusiasm for Esa-Pekka Salonen’s new Cello Concerto, just given its world premiere by soloist Yo-Yo Ma and the Chicago Symphony Orchestra with Salonen conducting, the two stars of the moment gleefully pointed fingers at each other as if to say, “You’re the man,” and, “Oh no, you’re the man.” They were both right. 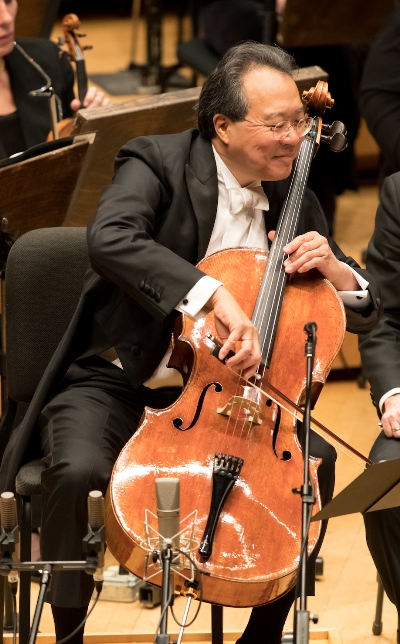 Salonen’s Cello Concerto, a co-commission by the Chicago Symphony and three other institutions, affords one of those special encounters with new music that brings instant fascination and delight – and a profound wish to hear it again at the earliest opportunity.

The work traces a 30-minute arc that seems to zoom in from cosmic dust to human singularity. The metaphor is Salonen’s own for the new concerto, and it fits the experience.

That sense of progression from vast void to something immediate and recognizable also aligns with the work’s harmonic language, which evolves from a kind of tonal miasma toward at least an aura of tonality.

Influences familiar in Salonen’s previous works were again in evidence, from Ravel and Messiaen to Lutosławski and even Sibelius. But like Mozart or Stravinsky or indeed any of those other composers just mentioned, Salonen reflects influences through his own integrating prism.

Much of the cello’s magnetism lies in what might be called its imaginative coherence. Though laid out in the classical plan of three movements, the narrative spins forward in highly original fashion: The cello acts as protagonist, not so much contender with the orchestra as exemplar, the large and colorful ensemble often imitating the line, pulse and weight of the far-ranging solo voice. 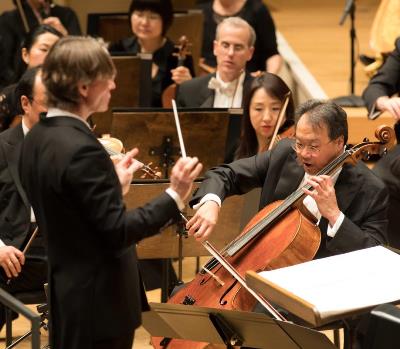 Salonen has indeed assigned a workout to his soloist, and Ma plunged into it with equal parts of energy, brilliance and finesse. The opening movement welled up from otherworldly rumination to great bursts. The second part found the solo voice slicing through a bright orchestral cloud to form a mere filament of sound – only to have it electronically looped back in a ravishing duet.

The finale brought fearsome bravura flights for the cello, whether unaccompanied or hotly punctuated by congas and bongos (the inimitable Cynthia Yeh, positioned with her drum array just to the conductor’s right) or in dazzling collaboration with the full orchestra. A last interlooping of the cello and its electronic doppelganger brought the concerto to a soft close. And set the house to roaring.

Hardly less scintillating, the concert also featured a complete performance of Stravinsky’s ballet “Petrouchka,” a riotous follow-up to the Salonen-CSO turn through Stravinsky’s “The Rite of Spring” from the previous week. 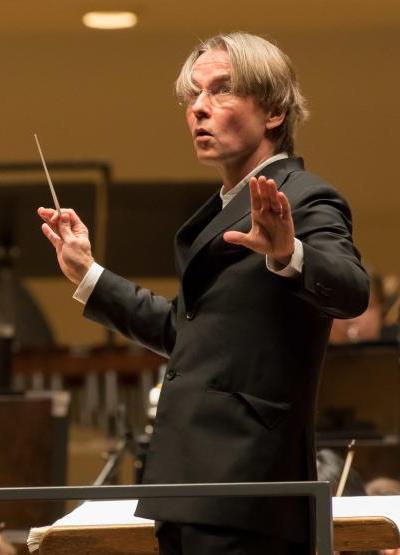 Completed in 1911, “Petrouchka,” the tale of a pathetic puppet who comes to a sorry end at the hands of some bad puppet-people, was composed immediately after “The Firebird,” the ballet score that catapulted Stravinsky’s to instant celebrity. Hints of the landmark “Rite of Spring” (1913), already taking shape in sketches, abound in the irregular rhythms, suddenly thematic shifts and bold orchestral colors that permeate “Petrouchka.”

Salonen led an exuberant performance that showcased the CSO in every one of its virtuoso sections, from woodwinds headlined by principal flutist Stefán Ragnar Höskuldsson’s long-lined solos to gleaming brasses. Among the brightest stars was guest trumpeter Thomas Hooten, principal of the Los Angeles Philharmonic, whose buttery playing was a hedonistic pleasure.
And again, as in “The Rite of Spring,” the CSO strings provided a reminder that a luscious, fluent and potent string sound is the perhaps undervalued bedrock of Stravinsky’s big ballets. Salonen’s was a heady “Petrouchka,” woven from wit and passion, eloquence and acerbity.

Wit was the watchword for the concert opener, John Adams’ “Slonimsky’s Earbox,” a brash orchestral tribute to Nicolas Slonimsky (1894-1995), celebrated Russian-American conductor, author and wry musical pundit. The work’s opening flourishes, with their jagged rhythms and sudden starts and stops, might pass for Stravinsky in his early ballet mode. Taken all together, Adams’ 13-minute essay is a tour de force of orchestral writing and a worthy obeisance to its formidable namesake. Salonen led a performance as crisp as it was affectionate.