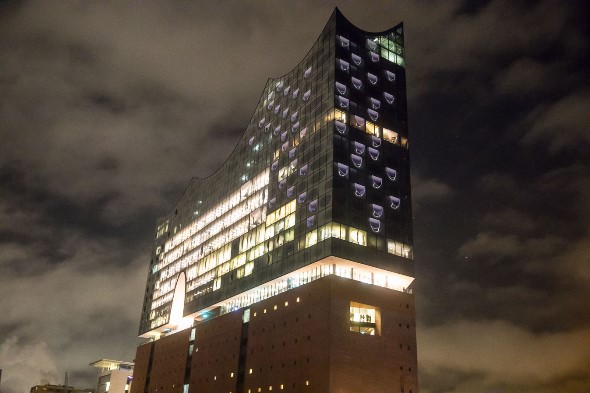 Review: Figuring out acoustics on the fly, Riccardo Muti and the Chicago Symphony played two nights for night-and-day audiences.

HAMBURG – Some 600,000 of the curious, and proud, already have taken the long, long escalator ride from street level to the eighth-floor lobby of this city’s brand-new Elbphilharmonie concert hall, where the Chicago Symphony in concerts Jan. 14-15 became the first foreign orchestra to perform on its stage. Both the curiosity and the pride were understandable. 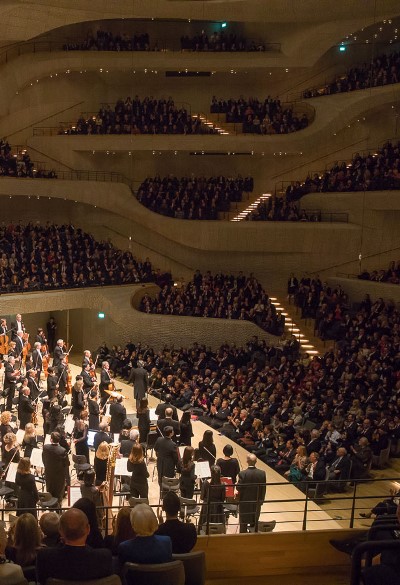 More than a decade of visualizing, planning, delays and finally construction went into the Elbphilharmonie, a defining landmark on the Hamburg waterfront that came to fruition at a cost of nearly 800 million euros, or roughly three times the originally projected cost. But perched quite dramatically atop a warehouse, its high profile suggestive of a crown, the Elbphilharmonie seems likely to become the iconic symbol of Hamburg much as the seashell image of the Sydney Opera House identifies that city worldwide.

As the soaring concert edifice is parked on top of another building, getting to it feels a bit like a Disney theme park ride. Step onto an outdoor escalator and up you go – way, way up on what is plausibly claimed to be the longest curving escalator in the world, so long that from the bottom you can’t see the top, which lies beyond a gradual arch in the ride.

The object of the adventure is of course the grand performance venue, which features the terraced, surround seating scheme that has become de rigueur in modern concert hall design. In the Elbphilharmonie, the terracing is striking in both its visual and acoustical complexity. Rather than conventional continuous levels, or rings, the visitor finds instead seats clustered in irregularly stacked pods and segments. These multitudinous subdivisions contribute to the acoustical rigors of the hall, whose wall surfaces are covered with an articulated skin of gypsum. 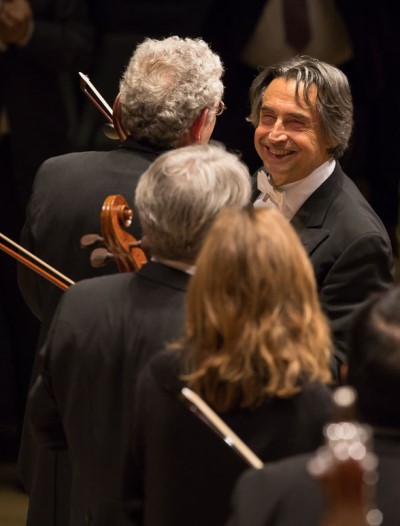 How does it all sound? The answer to that central question awaited the Chicago Symphony and music director Riccardo Muti on the night of the first of their two concerts at the Elbphilharmonie. Whereas in Paris, the first stop on this European tour, the orchestra enjoyed the advantage of lengthy rehearsal in the Phiharmonie before performing for the paying public, in Hamburg the  band launched into its first concert cold. And the immediate results were just what one might have expected: a performance of Hindemith’s Concert Music for String Orchestra and Brass that was overbearing on the brass end.

Making adjustments on the fly, Muti reined in the brass-works to achieve a more balanced and warmer sound for Elgar’s sumptuous “In the South.” If further corrections with Mussorgsky’s “A Night on Bald Mountain” still couldn’t quite match the magical effect the work had produced in the Paris concert, the Mussorgsky-Ravel “Pictures at an Exhibition,” which capped the first Elbphilharmonie concert, at last displayed the luxuriant brilliance that is the CSO’s trademark.

“Pictures” also elicited the evening’s first really unbuttoned cheers from the Hamburg audience, dolled-up first-nighters who up to that point had received the Chicagoans with a certain politesse and not much more. 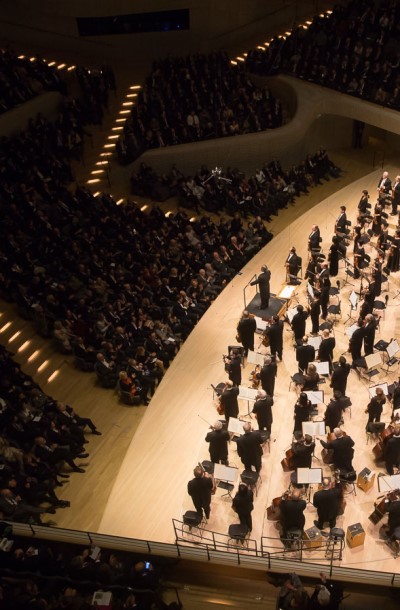 The next night seemed to be more fun for everybody. Now Muti and company knew the acoustical hand they’d been dealt; and perhaps just as important, the audience – dressed down a notch, or several – had come to revel, much as the Parisians had done. The lyrical ruminations of “Contemplazione” by Catalani brought boisterous applause, which was only ratcheted up after the CSO’s Technicolor reading of Strauss’ “Don Juan.” At the end, a fiery and high-tension account of Tchaikovsky’s Fourth Symphony brought a stormy ovation very like the celebration in Paris.

Muti, who had treated the previous night’s tux crowd to an encore of the Overture to Verdi’s opera “The Sicilian Vespers,” now unleashed the composer’s better-known, and more showy, Overture to “Nabucco,” somewhere in the middle of which he executed a most remarkable vertical leap for a man of 75.

The next night would find the CSO playing yet another relatively new concert hall – in Aalborg, Denmark. No rest for the brasses. Once more that brazen Hindemith loomed just ahead.