Bruckner 9 was prelude of promise: Muti, CSO to open next season with Seventh Symphony When Riccardo Muti and the Chicago Symphony Orchestra open their 2016-17 season at Orchestra Hall in September, it’s going to feel very much like picking up where the current season ended, with one of the splendorous symphonies by the 19th-century Austrian composer Anton Bruckner. To have just heard the Ninth is to look forward to next season’s opener, Bruckner’s Seventh Symphony, with electric anticipation. Even by the lofty standard that has become the norm at Muti’s CSO concerts, this Bruckner Ninth Symphony was special – a clear, insightful, personal conception by Muti brought off with a stunning display of collective virtuosity by a great orchestra.

Indeed, Muti dedicated the concert – which paired the Ninth Symphony with Bruckner’s “Te Deum” – to the historical roster of Chicago Symphony musicians who have contributed to the orchestra’s distinctive tradition. Both works on the program had received their U.S. premieres by the Chicago Symphony under founding music director Theodore Thomas. Throughout this season, the CSO’s 125th, Muti has peppered programming with works that received either their world or U.S. premieres by the CSO.

But this final sampler from the archives offered a novel twist. When Bruckner died, in 1896, he left the Ninth Symphony unfinished – the first three movements completed in detail but with no finale. Aware that his strength was failing, the composer suggested capping off the truncated Ninth with his “Te Deum,” written more than a decade earlier.

That notion has never taken wing, for various good musical reasons, not least of which is the Ninth Symphony’s intrinsic sense of completeness as it stands, much like the two-movement “Unfinished” Symphony of Schubert. Yet even that said, the specifically, exuberantly religious “Te Deum” really doesn’t fit atop the Ninth Symphony’s abstract instrumental frame; it’s an inherently different proposition from the secular spirituality of Beethoven’s Ninth Symphony.

Muti’s clever scheme was to present the three-movement, 65-minute Ninth Symphony as the concert’s first half; then, after the emotional processing – and intellectual buffering – of an intermission, to add the 25-minute “Te Deum” with its chorus and four solo voices. Like the Lutheran Bach, who typically initialed his scores DSG (Deo soli Gloria, or To God alone the glory), the devout Catholic Bruckner could be said to have offered every stroke of his pen in praise of God. His symphonies, even those in minor keys like the Ninth (D minor) are all but devoid of shadows; rather, they play out in rapturous affirmation, their dramatic pull achieved largely through sudden tectonic shifts, epic dynamic swings, stop-and-go alternations between fragile stretches of lyricism and hair-raising cataclysms of sound.

What’s not so obvious is the elegance of Bruckner’s constructions, and the subtlety required to plumb their layered complexity and deep riches. To set forth mere broad-brush contrasts between soft and stormy is to fail so magisterial and finely wrought a score as the Ninth Symphony. Muti went straight to the heart of this majestic music.

He imbued the opening movement’s cosmic tide, its sublime ebb and flow, with a sure sense of nervous urgency and spiritual quiescence. Fluid, shimmering strings and resplendent brass (no fewer than eight French horns) contributed to a sound of breathtaking luminosity.

The fearsome scherzo of the Ninth Symphony is quite a showpiece for the timpanist, and CSO principal David Herbert lit up the hall with his thunderous riffs. By the same token, Herbert’s quick, soft rolls were a wonder of rhythmic precision and dynamic touch.

To the Adagio that serves as Bruckner’s de facto “finale,” Muti brought a pervasive serenity that conveyed the music’s great power as well as its soulful luster. At expansive tempos, the CSO winds made eloquent work of ensemble passages that reflected the composer’s mastery of gestures small as well as grand.

Bruckner cast his “Te Deum” – or more fully (in English) “We praise you, O God, we acknowledge you to be the Lord” – in the brilliant, even insistent, key of C major. It is an absolute affirmation of the composer’s personal faith, at once humble and joyful. The CSO Chorus, prepared by Duain Wolfe, gave a radiant performance that displayed both the exuberance of this credo and its impeccable craftsmanship.

Oboist Alex Klein, a name that will ring familiar to longtime patrons of the CSO, has been named winner of the orchestra’s auditions for principal. The position was vacated when Eugene Izotov departed for the San Francisco Symphony. 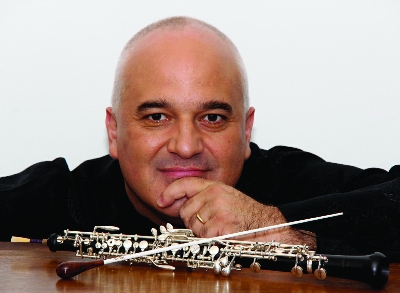 Klein was first hired as Chicago’s principal oboe in 1995, at the age of 30, when the orchestra was under the direction of Daniel Barenboim. The rising star, a Brazil native, was schooled at Oberlin, with several international competition wins under his belt.

All went well in Chicago until Klein fell victim to a not uncommon disorder among musicians dependent upon rapid hand and finger moves. Called focal dystonia, it can be career-ending or course-changing.

Among those affected have been pianists Gary Graffman and Leon Fleisher, who turned to music administration and teaching. Violinist Peter Oundjian, then a violinist with the Tokyo Quartet, also suffered from it and turned to conducting; he now leads the Toronto Symphony. It is believed that Robert Schumann, the 19th-century composer and pianist, had it also.

In 2004, Klein resigned from the CSO after concluding that his own fingers were preventing him from playing to standards he had set for himself. As he told the New York Times several years ago, “I was sitting in the heart of the best orchestra in the world, playing with the best musicians, playing the most beautiful repertoire. Every day, every rehearsal, every minute on that stage – I was filled with awe. It’s like I went to heaven. And then I came back.”

In the years that followed, Klein persisted with consultation and experimentation, ultimately developing a variety of therapeutic habits that, along with physical adjustments to the oboe keys themselves, made it possible for him to resume performing.

Although Klein has won the CSO’s principal oboe audition, an actual appointment will not be announced until a contract has been achieved.