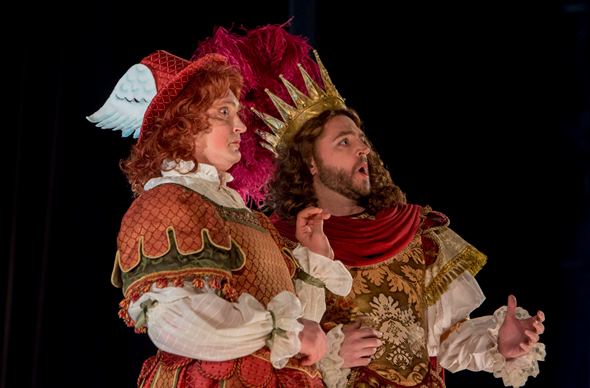 Thanks to the adventurous Haymarket Opera Company, Chicago audiences experienced one of the jewels of early Baroque opera, Francesco Cavalli’s “La Calisto,” on May 6 and 8 in their own back yard. It was a pure, glistening delight.

With a larger stage at their disposal after the move to the spacious Athenaeum Theatre, the company’s seasoned creative team – stage director Sarah Edgar, set designer Zuleyka V. Benitez, costume designer Meriem Bahri and lighting designer Lindsey Lyodan – offered a historically informed re-invention of sets and costumes inspired in part by surviving production books from the opera’s 1651 premiere, accompanied by period gestures and stage movements for the singers. 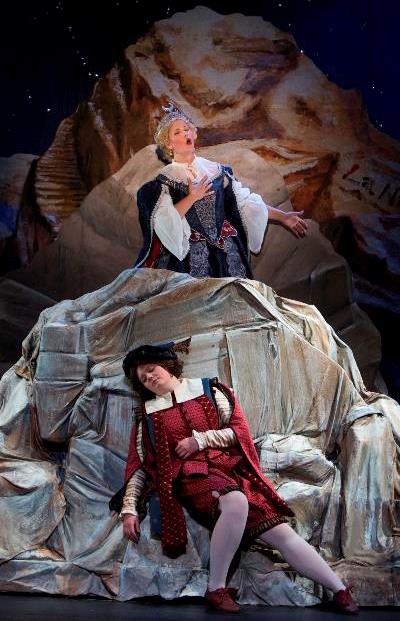 The need for this pocket-size company to work with a small budget (and its commitment to sustainability) further fuels the imagination: There were painted backdrops and sliding flats showing the forest or a mountain top, puffy moving clouds, a large full moon, a tree trunk ingeniously made of papier mâché, small rocks and a fountain at which Calisto – the beautiful nymph at the story’s center — paused to drink.

Most impressively, in the opening scene the character of Nature sang while perched on a high rock, her head surrounded by a snake that rotates, continuously biting its tail. The colorful costumes mixed accuracy and wittiness, with feathered headsets for Jove and Juno, furry leggings for the satyrs, long tunics for Diana and her followers, and a minimalist face mask for Calisto as a bear.

Haymarket’s cast of singers, all young, as appropriate for an opera that is about love’s pains and pursuits, displayed assured vocal style and stage presence.

Cavalli’s more than forty operas (of which twenty-eight survive) reflect the creative milieu of opera’s early emergence in Venice. Just like in the contemporary Venetian spoken theater, the commedia dell’arte, at the heart of these operas was entertainment first, and moral edification a distant second.

Key elements were immediate comprehensibility of the words (sung or more often spoken in the heightened “recitativo drammatico” style to the accompaniment of the continuo instruments—harpsichord and low strings); musical variety and the first attempts at individual characterization through music; and spectacular stagings, which employed the newest technologies and machines and inspired awed “meraviglia” in the spectators. 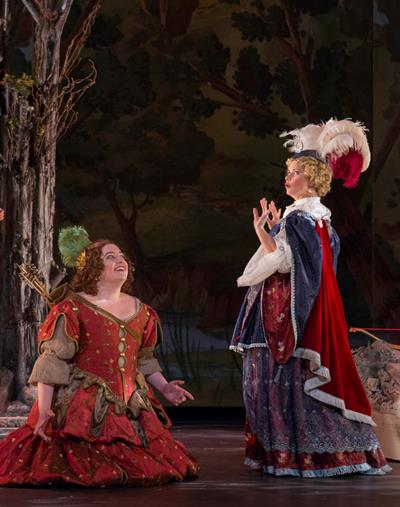 Mythology-derived plots were convoluted but often poignant. Alternating high and low theatrical situations, they involved a mixture of gods, nymphs, shepherds, and other humans, often in disguise or in various forms of cross-dressing, and were presided over by abstract characters (for “La Calisto,” these are Nature, Eternity, and Destiny), who framed the story and drew out its moral teachings.

Most importantly, this was real theater and real performance, with the catch that everything that was staged had to be new: Operas rarely lasted more than one season or sometimes more than a single run, composers and librettists worked down to the wire to accommodate the singers’ needs and whims, and the composer often doubled as one of the keyboard or string players (never more than five or six in total).

“La Calisto,” based on one of the stories in Ovid’s “Metamorphoses” with a libretto written by Cavalli’s long-time collaborator, the poet Giovanni Faustini, tells the story of Calisto, a follower of the chaste goddess Diana, who is tricked by Jove (aided by Mercury) to fall in love with him while he appears to her in disguise as Diana.

Rebuffed by the real Diana after what she believes was their night of love, Calisto is in despair. Diana, in the meantime, is chastely in love with Endimione, a shepherd with a passion for looking at the stars, who reciprocates her affection. 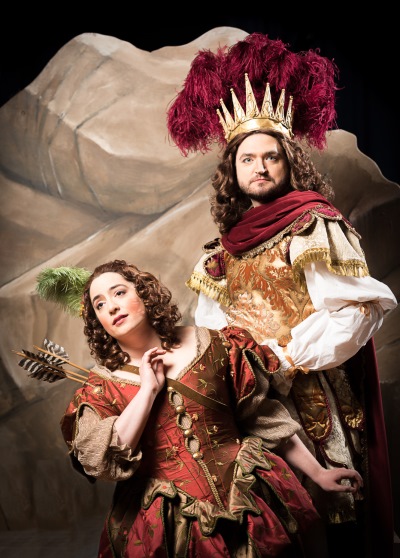 The jealous Juno, who descended to earth on a chariot pulled by a peacock looking for her unfaithful husband, intuits that the Diana loved by Calisto is really Jove, and decides to punish not him, but Calisto, who is transformed into a wild bear. Although Jove doesn’t have the power to undo the punishment, he consoles Calisto by showing her how, at the end of her time on earth, she will be transformed into the shining constellation of Ursa Major.

The capable cast here extended from mezzo-soprano Lindsey Adams in the part of Endimione and soprano Nathalie Colas as Linfea, another of Diana’s nymphs, to the expressive baritone Ryan de Ryke as the witty Mercury, Jove’s trusted adviser and co-conspirator.

Particularly effective was soprano Kimberly McCord as the fiery Juno, while the Jove of Aaron Wardell was a little wooden.

Mezzo-soprano Angela Young Smucker beautifully portrayed the goddess Diana, both the real one and Jove in disguise, and managed to run the expressive gamut from Diana’s chaste and tender relationship with Endimione, to her imperious rebuff of Calisto, to Jove’s salacious pursuits.

As Calisto, the soprano Chelsea Morris Shephard was both delicate and passionate. All the singers shined in the expressive ariosos and duets that bejewel Cavalli’s score, from Calisto’s laments over her lost lover, to Endimione’s spellbound hymn to the moon, to Linfea’s doubtful meditations on chastity. Italian pronunciation was the weak spot for almost everyone, with the exception of McCord and the French-speaking Colas, but this is an unforgiving repertoire in which the bulk of the action is carried by poetic declamation over sparse musical accompaniment.

The core Haymarket band played with the stylish sound, technique, and sensitivity that we’ve come to expect from them (violins Jeri-Lou Zike and Martin Davids, cello Anna Steinhoff, harpsichord Paul Nicholson) and was richly complemented by David Walker on the theorbo. Artistic director Craig Trompeter conducted with assured musicianship from the second harpsichord.