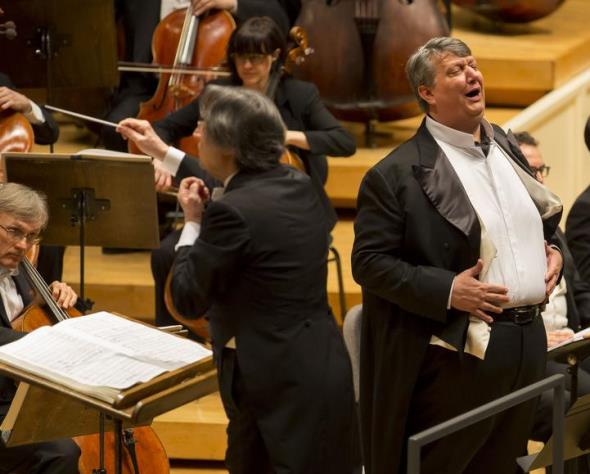 Amid all its other virtues, and those are manifold, there is a refreshing, illuminating transparency and uncluttered purity in the Chicago Symphony Orchestra concert presentation of Verdi’s opera “Falstaff.” Its co-stars are baritone Ambroglio Maestri in the title role, at the head of a splendid cast, and CSO music director Riccardo Muti on the podium. 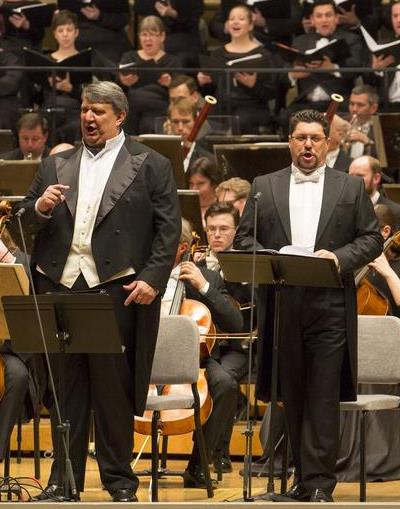 If this is very much Maestri’s show, a veteran Falstaff in his vocal prime with a profound sense of the musical pathos that underpins Verdi’s outwardly comic character, it is Muti’s nuanced command of the opera’s intimate details that makes this production the rare treat that it is.

Production may be exactly the wrong word. Muti’s “Falstaff” is a distillation of the score to its closely inflected psychological essence: a chamber piece, in other words, unencumbered by all the practical necessities of the opera stage. Here is Verdi approaching 80, in the winter of his contentment, writing for himself, musing as much as composing, not so much adapting Shakespeare’s “The Merry Wives of Windsor” as invoking the sorrows of Sir John the fat knight as a testament of his own world view.

“Reo mondo” – evil world, grumbles the battered, soaked Falstaff after his ill-fated tryst with Alice Ford ends with his being dumped from a laundry basket into the Thames: “There is no virtue any more. Everything’s declining.”

Maestri, an ample fellow himself, captures this outsized and delusional Don Juan both physically and in a fine vocal palette that conveys the real depth of Falstaff’s hurt, the deep bruise to his self-esteem. This singer requires neither costume nor props. In Muti’s arrow-straight concert version, sans hint of costume and little more than facial gestures to augment musical interaction, Maestri still manages to draw hearty laughter with his comic conniving and yet bring the house to rapt silence as he laments another reversal for the dauntless knight. It is bittersweet comedy. 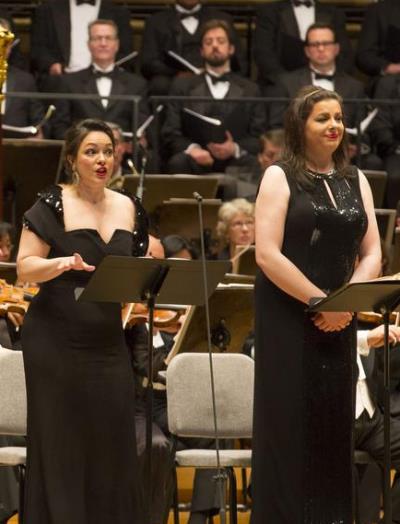 His adversaries, and Falstaff is surrounded by them, are a no less capable lot vocally, starting with Maestri’s excellent rival in voice and comedic élan, baritone Luca Salsi, as Ford, the jealous husband of Falstaff’s astonished prey Alice. The scena of Ford’s “undercover” visit to Falstaff – to test the situation by forcing it a bit – was an artistic high point as Maestri’s puffed-up Falstaff bragged of the rendezvous at hand and Salsi’s apoplectic Ford leaked his rage at every detail.

On the female side of these machinations, soprano Eleonora Buratto as Alice Ford and mezzo-soprano Daniela Barcellona as the go-between Mistress Quickly matched the men in vocal glitter as well as theatrical flair. There are no real arias in this, Verdi’s final opera, which plays out in sparkling, through-composed dialogue and the occasional monologue. But that’s not to say the two women lack lyrical, vivacious music to sing, and both Buratto and Barcellona offered animated, witty, vocally authoritative performances.

In streamlining Shakespeare’s play as workable opera, Verdi’s librettist Arrigo Boito all but eliminated Falstaff’s second targeted couple, Meg Page and her husband. Boito had to keep Meg because of Falstaff’s identical letters gambit, in which he sends the same billet-doux to both women. The women immediately spot the scheme, and resolve to teach the rash knight a severe lesson. But all that does reduce Meg to a minor role, though even here Muti’s venture is well served by Laura Polverelli. 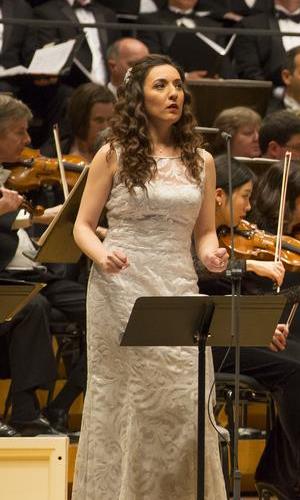 The closest Verdi comes to conventional arias or duets touches on the young lovers Nanetta, who is Ford’s daughter, and Fenton, who is emphatically not Ford’s choice for a son-in-law. Rosa Feola was a radiant pleasure as Nanetta, her silvery voice soaring effortlessly through music often evocative of Mozart. Tenor Saimir Pirgu brought a similarly sweet and youthful sound to Fenton.

Rounding out the big cast in fine fashion are tenor Saverio Fiore as Dr. Caius, a whining old fool who has designs on Nanetta, and tenor Anicio Zorzi Giustiniani and bass Luca Dall’Amico as Falstaff’s rebellious cohorts Bardolfo and Pistola. The Chicago Symphony Chorus, prepared by Duain Wolfe, dispatched its modest but colorful role with vibrancy and precision.

That might be said as well for the CSO musicians. Verdi’s orchestral writing in “Falstaff” is nothing short of fine-brush tone painting, from the jingle of a money purse in the old knight’s hands to the thunder of Ford’s mental storm.

Muti spun this wealth of elements into a thrilling tapestry. It was a grand conclusion to his trilogy of Verdi operas in concert, after previous turns through “Macbeth” and “Otello” – and a worthy addition indeed to the CSO’s part in Shakespeare 400 Chicago, the yearlong citywide observance of the Bard’s death on April 23, 1616.