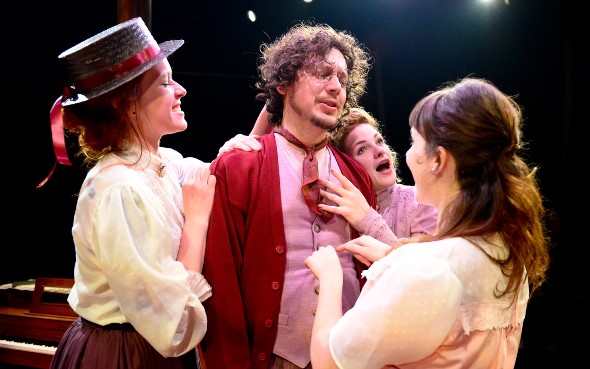 Review: “Three Sisters” by Anton Chekhov, adapted and directed by Geoff Button, produced by The Hypocrites at The Den Theatre, through June 6. ★★★★

Two generations before Jean-Paul Sartre and his coterie of French existentialist playwrights, there was Anton Chekhov, dealing with the same core moral issue of accepting accountability for one’s own life and the hellish consequences of evading that necessity. Such is the specter that confronts the characters in Chekhov’s “Three Sisters,” which the Hypocrites have brought to the stage under the penetrating, indeed searing  direction of Geoff Button, who also adapted the play. 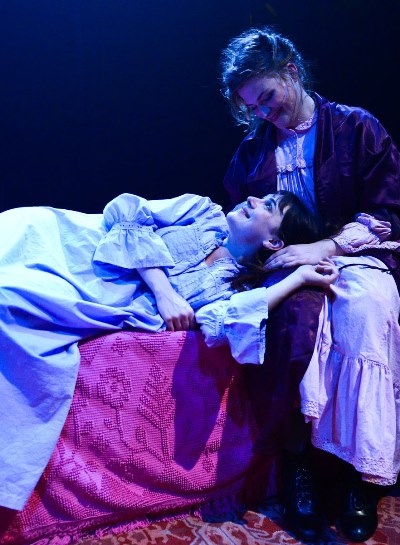 Both the generalized title and circumstances of “Three Sisters” bring to mind the British playwright Githa Sowerby’s “A Man and Some Women,” written in 1914, about 15 years after Chekhov’s play and similarly melancholy in its familial narrative of dependence and mutual resentment. Sowerby’s title would fit Chekhov’s story perfectly.

The three sisters – Olga, 28 years old and single when the play begins; Masha, 23 and married; and Irina, 20 and yet to experience love – also have a brother, Andrei, a promising university student destined to become a famous professor. The women’s lives turn with his; and as time will soon tell, Andrei is as weak-willed as he is capable.

Their residence is a rural estate (designer William Boles‘ handsome interior is set off by birch trees everywhere), their friends mostly the military officers who knew their late father. As Shakespeare’s Touchstone might say, in respect that it is a pastoral life, it is agreeable; but in respect that it is not the Moscow they cherish and now pine for, it is tedious. The sisters, especially youthful and free-spirited Irina (Hilary Williams), talk constantly of going back to Moscow. While her older sisters, Olga (Mary Williamson) the sensible schoolteacher and Masha (Lindsey Gavel) the wife of a schoolteacher, know this is a pipedream, Irina clings to the idea in genuine, desperate hope. 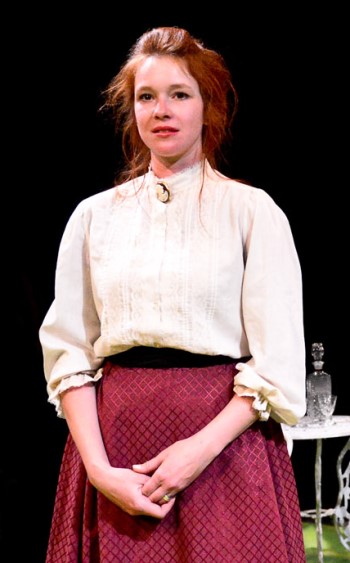 If the lives of all three sisters initially seem tolerable enough, that perspective changes quickly when Andrei (Joel Ewing) marries, and brings into the house as novice matriarch, the unlikely small-town girl Natasha (Erin Barlow), awkward and self-conscious, whom the sisters – accomplished in many things, including several languages — have openly criticized for her lack of taste and refinement. Natasha proves to be their worst nightmare. And poor Andrei’s, as well.

Barlow cuts a demonic figure as this bumpkin become dragon lady, re-ordering the household, threatening to dismiss Olga’s beloved old servant, reducing her new husband to the station of an obedient puppy. And meanwhile cuckolding him. Ewing offers an equally convincing portrayal as the feckless Andrei, whose long fall from aspiring scholar ends with him pushing a perambulator and mouthing a hollow defense of his shrewish, deceiving wife.

It is Gavel’s complicated Masha, silently and dutifully enduring a loveless marriage until an authentic passion wells up, who commands our hearts — as she must if “Three Sisters” is to succeed at all. And Gavel has a perfect foil in D’Wayne Taylor as Masha’s good-hearted husband, a young girl’s hero who under the scrutiny of marriage has turned out to be ordinary. Taylor’s earnest, solicitous, forgiving teacher-as-husband is skillfully inflected, ennobling a character who can seem merely silly. 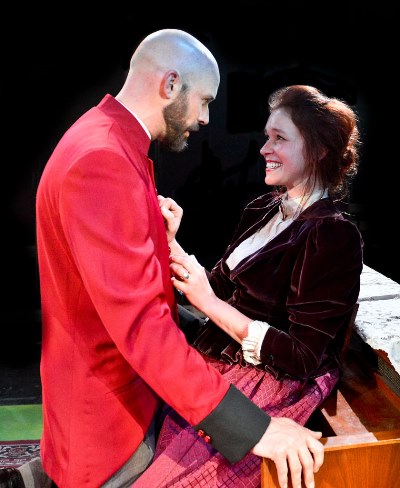 But the pain – and the delusion — of “Three Sisters” comes in ever higher waves, much of it connected to the assorted military officers who hang about the household. The aristocratic Tuzenbach (played by Noah Simon with affecting authenticity) wants to know the feeling of an honest day’s work, thereby making himself worthy of Irina, and so relinquishes his lieutenant’s commission. The sullen, cynical Capt. Solyony (understated but severely edged by John Kahara), whose affection for Irina goes unreturned, finds satisfaction on his own bitter terms.

Yet the greatest sadness, the consummate grief, is perpetrated, through mere circumstance, by the philosophical commander Vershinin (Vance Smith, at once authoritative and vulnerable). Like Masha, he is married, and not happily. In each other, they see the light of love and what might have been, in another time and place, Now his company is moving out, and he must leave — forever. The shuddering anguish that wracked Gavel’s inconsolable Masha at their parting brought the house to a breathless silence. It is the quintessential moment of “Three Sisters.” That and a gunshot in the distance, as hearts fall like flushed quail.

Perhaps the voice of Chekhov in all this belongs to the wizened old drunk of a doctor (Bill McGough, suitably scruffy and imperturbable), a doddering friend of the family who long ago drowned his usefulness in vodka. Life is such a farce to this thread-bare soul. Tah-rah-rah-boom-dee-ay, he mutters impassively. Another death today.