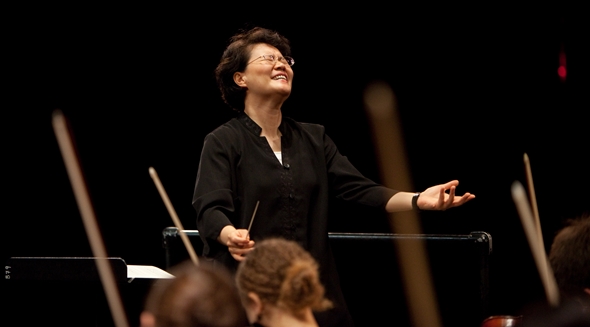 The singular community spirit of Chicago Sinfonietta was on proud display March 23 at Orchestra Hall in a stylish, disciplined and roundly entertaining performance of Orff’s “Carmina Burana” conducted by the organization’s music director, Mei-Ann Chen.

Featured with Chen’s chamber-size ensemble were two Chicago choruses, both prepared to a fare-thee-well: the choir of Roosevelt University’s Chicago College of Performing Arts and the Anima Young Singers of Greater Chicago. 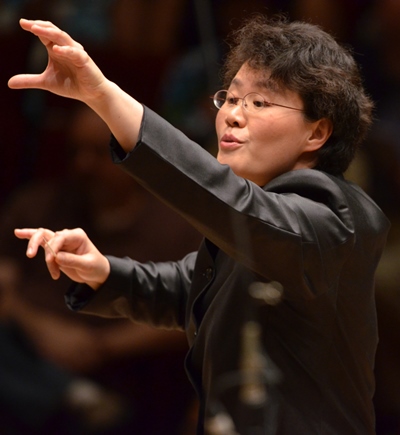 “Carmina Burana,” which Orff described as a scenic cantata and which is indeed often staged, is a colorful and witty setting of medieval poems by students preoccupied with two grave matters that have always distracted the young: drinking and sex. Add to those an overlay of general despair about the fickleness and brevity of life, and you pretty well have the philosophical sum of a work that has never fallen from popularity since its premiere nearly 80 years ago.

Orff titled the work after the medieval volume of bawdy and satirical poems from which he drew his texts – literally songs, or carmina (CAR-mina), of the Benediktbeuren (or Beuren, for short). The poems are in Latin and old versions of French and German.

Laid out in 25 episodes, the work begins with a choral invocation of the goddess of fortune (“O Fortuna!”), a rhythmically driving chant that foretells the propulsive syncopations that will animate most of what follows, for chorus and soloists alike. Chen’s precise musical direction got chorus and orchestra rolling right out of the gate, establishing a level of energy and clarity that would mark the entire performance.

In a sense, the vocal forces operate on two levels, the chorus representing society in the big picture and three solo voices engaging the hard issues of life from a personal perspective. The Roosevelt choristers had their music, whether raucous commentary on drinking or tender musings on mating, down to a crisp T. This listener got the impression the singers prepared by Cheryl Frazes Hill not only knew their music cold – never mind that they were holding scores – but that they also understood the intent of the old languages on their lips. 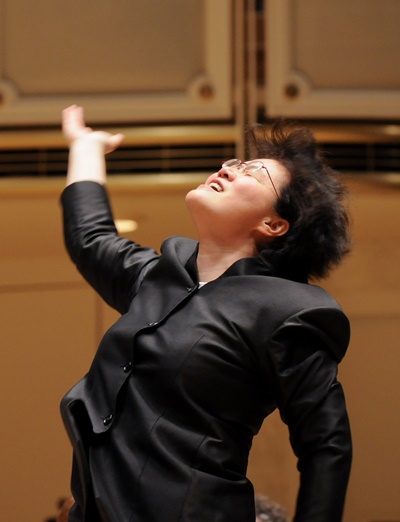 The children’s chorus (all girls) came to their task no less ready, with their music in their heads and nary a score to be seen among them. They sang expressively, with just the right innocence – the only portion of that to be found anywhere in this lusty work.

Among the soloists, it is the baritone who draws the lion’s share of music, and Joseph Lattanzi was fully up to the duty, singing in a dark, creamy voice – drenched with irony – of fortune’s folly and the refuge of obliterating drink.

That said, it is also the baritone’s bitter perspective that keeps us in the moment through the whole sequence of scenes that form the cantata. His is the leading role, and Lattanzi kept dropping out of character, grinning between verses and while seated as if to jolly the whole affair along. While “Carmina Burana” traces a wry arc, it is seldom meant to be cheery.

The work’s one overtly funny episode is the tenor’s only aria, in which he impersonates a roasted swan in its progression from the turning spit to the table and waiting teeth. Tenor Jonathan Weyant, shuffling dismally in from the wings when his turn came, delivered his high-lying music with delicious pathos and splendid technique.

Orff asks for a soprano with the stratospheric top notes one associates with Mozart’s Queen of the Night in “The Magic Flute.” That made Kimberly Jones a curious choice. In a generally uncomfortable effort, she found the requisite pianissimo high C on the word “Dulcissime” – the note anticipated through the entire evening – to lie just beyond her grasp. 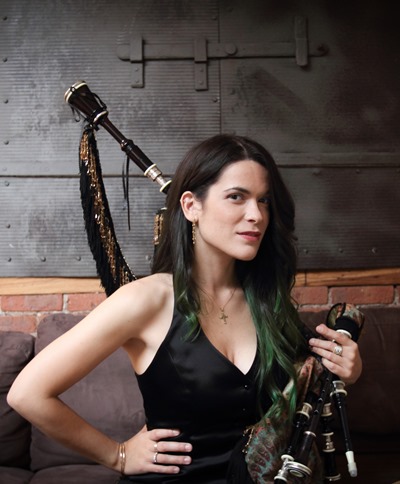 But the choristers had the final flourish, in a blazing reprise of the same text and music that open the work. Again the singing was vibrant to the last resigned breath.

Impressive as well was Chen’s alert and polished orchestra, which opened the concert with two snippets of music from Bizet’s “Carmen” suites — bright candles that burned too brief. More of that music, played so well, could only have enhanced the quotient of satisfaction.

The program’s first half spotlighted a genuine curiosity, Emilio Solla’s “A Galician Voyage,” characterized as a concerto for bagpipes, piano, tambourine and singer – all in the multipurposed person of Cristina Pato, Spanish virtuoso of the gaita, a member of the bagpipe family. I found the work to be a hodgepodge and musically rather shallow, the overriding impression more of schtick than of art. (Pato’s blistering-fast solo encore on the gaita was more fun.) The concerto’s slow movement, with Pato waffling along at the piano, did offer an intriguing riff on “Somewhere Over the Rainbow.” But all told, I for one was not a happy bluebird.