Vienna Aisle: Inside reeling mind of Tannhäuser via a bold psychological thriller at the Staatsoper 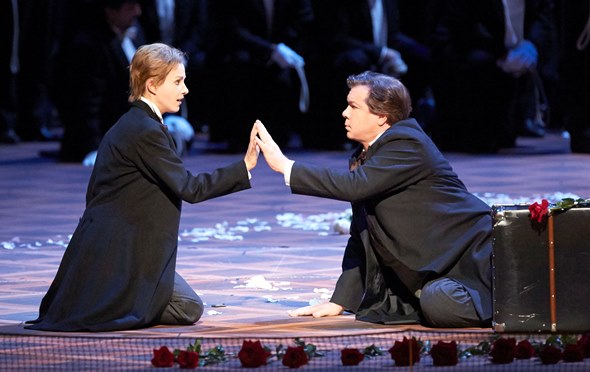 VIENNA  — Serendipity delivered me to the Vienna State Opera on Oct. 30 to take in director Claus Guth’s surprising, indeed completely out of the box and captivating production of Wagner’s “Tannhäuser.”

It wasn’t just that the Wiener Staatsoper was in play on a night when the Chicago Symphony Orchestra – the object of my week in Vienna – wasn’t performing one of its four concerts at the Musikverein: The opera at hand was “Tannhäuser,” which the Lyric Opera of Chicago will be mounting later this season and which I had not seen in some time. 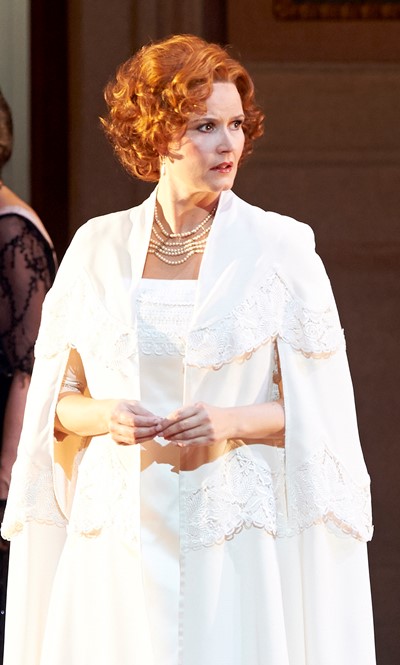 Not that one needs a special reason to spend an evening in the Staatsoper’s intimate, beautiful and storied auditorium or roam its splendid foyers. Gustav Mahler ruled there through 10 stormy seasons across the fin-de-siècle. (The talk of Vienna this week has been the possibility that CSO music director Riccardo Muti, a longtime favorite here, might add the Staatsoper’s principal conductorship, recently vacated.)

In any event, Claus Guth’s daring and brilliant “Tannhäuser” paid ample reward, not only conceptually but musically as well under the baton of Peter Schneider with tenor Robert Dean Smith in the title role, baritone Christian Gerhaher as his rival in love Wolfram von Eschenbach and soprano Camilla Nylund as the object of their shared passion.

(The Nov. 2 performance will be streamed live at a cost of 14 Euros ($22), about the same price as the Metropolitan Opera’s Live in HD cinema broadcasts. Get details here.)

Guth updates Wagner’s mélange of history and mythology from the Teutonic Middle Ages to Vienna at the end of the 19th century – not incidentally, to the time of Sigmund Freud. One could imagine Freud as consultant. This is a “Tannhäuser” of the mind, the anguished psyche of Wagner’s tormented minnesinger — a sort of troubadour. It is Tannhäuser’s humiliation and guilt, producing a total loss of his self-esteem and rendering him unable to engage the rational world, that together drive the opera. Guth has simply shifted the story wholly into the psychological realm, and in a stunningly adroit and empathic fashion. 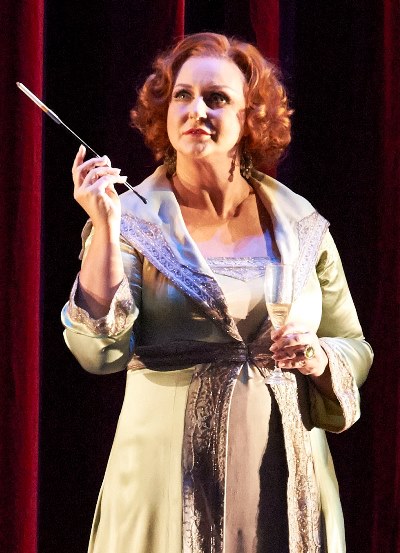 The source of Tannhäuser’s humiliation predates our first sight of him, and it is the reason we find him in the amorous environs of Venus’ mountain spa (as it were). He has lost a singing contest. Badly, or so he imagines. Think bombing in the first round of “American Idol.” So he slinks away to find consolation in the arms of Venus. But as the curtain rises, he’s bored with endless sex and wants to return home. In Guth’s setting, Tannhäuser’s emptiness is literally a barren stage on which he appears to observe both Venus and himself reflected in a mirror: This is manifestly not reality; but then, what is, and where does Tannhäuser look for it?

He invokes the name of Holy Mary and, poof, he’s back among his old pals – and once more close to the virginal Elisabeth, whom he loves to the point of worship.

The rub is that he’s also reminded of the hypocrisy that passes for sober morality among the home folks. A grand hotel lobby filled with dandies proves to be a marketplace where rooms and girls are rented by the hour. Even more amusing, the song contest venue bears a distinct resemblance to one sculpture-lined public space at the Staatsoper. And when the aristocratic songsters (bedecked in frock coats, cravats and top hats) sing of love as a Platonic pursuit, Tannhäuser replies, in effect, that these boys really need to get out more – that high-flown poetry doesn’t hold a candle to a hot tumble in the sack. 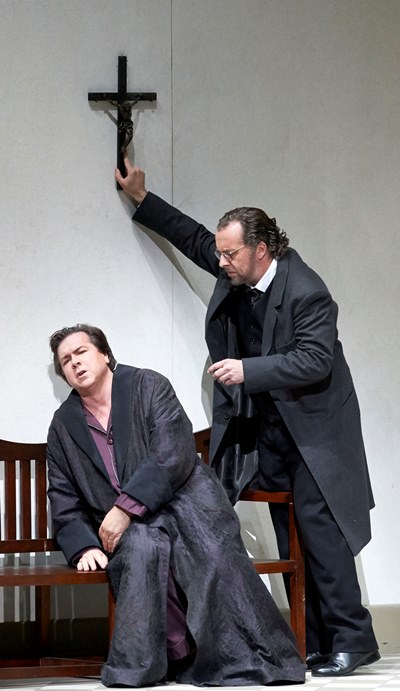 The society women are indignant, the men literally up in arms. It is Elisabeth who places herself between Tannhäuser and all those brandished swords. The irony is not lost on Guth: Despite his paeans to carnal love, Tannhäuser clearly makes a mother transference to Elisabeth — indeed identifies her with Holy Mary. Scene by scene, we see ever more plainly that these events are unfolding in Tannhäuser’s mind. At one point, the walls and ceiling of this posh space fly apart. Is the whole thing a dream?

Actually, it’s  more intense than that, as we discover in the final act, set in a hospital room, where Elisabeth awaits Tannhäuser’s “return” from his penitential pilgrimage to Rome to seek the Pope’ forgiveness for his many sins. The picture grows clearer still when the pilgrims arrive from Rome singing of the joys of salvation. Many of them wear restraining jackets; they are all dressed in white, and not for a long journey. Now Guth’s perspective on Wagner takes a turn worthy of Ibsen – the last tortured convergence of Tannhäuser, Wolfram and Elisabeth, three wretched, lonely souls unable to reach across the psychological gulfs that separate them.

That last act sent me into the night profoundly touched, marvelously satisfied, by more than a concept. This was first-rate theater, with real singing actors in Smith, whose final aria captured the delirium of a man who sees his only hope in the destructive act of returning to Venus; in Gerhaher, the night’s vocal star, who conveyed the full measure of the unrequited Wolfram’s despair; and Nylund, who imbued Elisabeth’s death – not offstage but in plain view – with devastating pathos.

Musical values were high throughout the production, starting with the fluid lyricism sustained by conductor Peter Schneider and the Weiner Staatsoper Orchestra and extending to bass Kwangchul Youn’s resonant singing as the Landgrave Hermann and soprano Iréne Theorin’s voluptuously voiced Venus, as well as the Staatsoper’s superb chorus.

How wonderfully high tech that the Wiener Staatsoper’s extraordinary “Tannhäuser” can be experienced first-hand, world-wide, at the click of a mouse.