Riccardo Muti, winding up his third season as music director of the Chicago Symphony Orchestra this weekend, led the orchestra and Chicago Symphony Chorus on a spiritual voyage Thursday night, from luminous Mozart and rapturous Vivaldi to a transcendental peak in Verdi’s glorious “Four Sacred Pieces.” 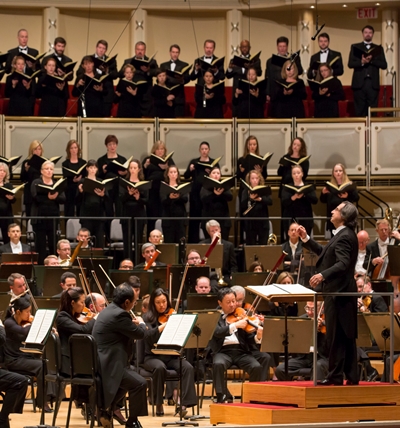 The focal point was the aggregation of four choral works on religious themes that Verdi (1813-1901) composed at various times late in his life, never intending them for performance and certainly not as a unified opus. But ever since the octogenarian composer reluctantly allowed them to be performed and published, they have endured as “Four Sacred Pieces,” a treasure of the choral canon and a blazing testament to Verdi’s ever-surprising genius.

It was something of a prelude to Muti’s plans to honor the bicentennial of Verdi’s birth in his CSO programing next fall.

Although the “Four Sacred Pieces” possess their own sequential logic, they also suggest pairings in dramatic alternation – for chorus alone in No. 1 (“Ave Maria”) and No. 3 (“Laudi alla Vergine Maria”), and chorus with orchestra in No. 2 (“Stabat Mater”) and No. 4 (“Te Deum”). This pendulum-like swing from consummate radiance to overtly theatrical display, then from prayerful adoration to profound supplication, showcased the power, finesse and discipline of the Chicago Symphony Chorus even as it pointed up once again the importance of Muti’s operatic career in his role as the CSO’s chief conductor and guiding spirit.

If it is axiomatic that an orchestra capable of playing very softly also commands the greatest and most subtle expressive range, the Chicago choristers – prepared to an edge of elegance by Duain Wolfe – demonstrated the same principle at work as their massed voices achieved the most compelling intimacy through the unbroken quiet of the “Ave Maria.” Similarly, in the Italian text from Dante that Verdi used for the “Laudi alla Vergine Maria,” the women alone cast a vocal corona around the object of this poetic veneration. 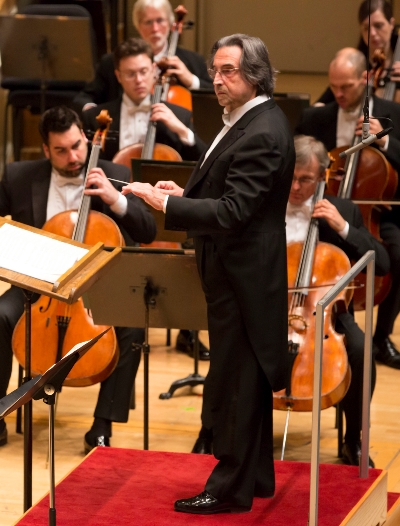 The brilliant “Stabat Mater,” which first recalls Mary weeping at the foot of her son’s cross and then appeals to her for intercession on behalf of a penitent, exploded with all the fire-power that might be mustered from a large orchestra and 150-voice chorus. Verdi’s operatic “Requiem” echoes here, as do the more boisterous and colorful aspects of “Aida” and “Otello.”

And here told as well the sensibility of Riccardo Muti as master of dramatic spectacle and indeed maestro par excellence in all things Verdi. The sheer energy emitted in the “Stabat Mater” was tremendous, as orchestra and chorus combined to generate tumultuous waves of sound; but no less arresting was the singers’ finely formed aura of resignation, acceptance and hope.

Hope is indeed the byword of the closing “Te Deum,” in which the choir, having made its softly sparkling first appeal, unaccompanied, erupted into a heaven-storming affirmation of “Sanctus, sanctus, sanctus, Dominus Deus Sabaoth,” now reinforced by full orchestra in full blaze. Verdi’s most original stroke, and the most touching, is a solitary voice from within the choir near the end, the lonely voice of humanity, signing over all trust, all hope to something above the confusion and error of this world. Thus Muti and company brought the “Four Sacred Pieces” full circle, from prayer to gentle prayer.

Russian mezzo-soprano Alisa Kolosova took on the assignment Vivaldi actually wrote for five favorite singers in his “Magnificat,” and Kolosova left one with no reason to wish for the original spread of voices. In her five arias, interwoven with choral episodes, the mezzo displayed a big, agile sound with a gorgeous lower register – notably in her fourth solo, “Esurientes implevit bonis” (“He has filled the hungry with good things”). Muti shaped a pliant, soulful performance that kept soloist, choir and orchestra in fluid synchrony.

The CSO choristers opened the concert with an exquisite, ethereal-voiced turn through Mozart’s six-minute “Ave verum corpus,” whose delicate balances attested to Muti’s consciousness of the power of understatement – and likewise bore witness to the fine coaching the chorus continues to receive under Duain Wolfe.