Review: “Die Zauberflöte” (The Magic Flute) by Wolfgang Amadeus Mozart and Emanuel Schikaneder, with the Berlin Philharmonic conducted by Simon Rattle, to be released in the Digital Concert Hall streaming archive. ★★★★

BERLIN — Focusing on words and music, Schikaneder and Mozart in their abounding cleverness, the Berlin Philharmonic delivered a concert performance of Mozart’s “Die Zauberflöte” April 7 that was simultaneously broadcast to European TV and cinema audiences as if wafting in on a spring breeze. 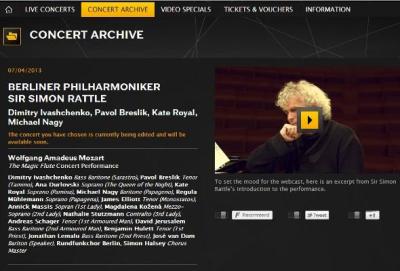 The Berlin live broadcast is now being edited for re-play to international audiences via the Philharmonic’s Digital Concert Hall, a streaming service that offers various pay-per-view and subscriber options.

There is much to recommend catching it: a delightful Papageno (baritone Michael Nagy) who is likely to be new to American opera audiences, a sneak peek at a Queen of the Night who comes to the Metropolitan Opera in 2014 (soprano Ana Durlovski), and an orchestra at front and center such as you will rarely hear in an opera house pit. 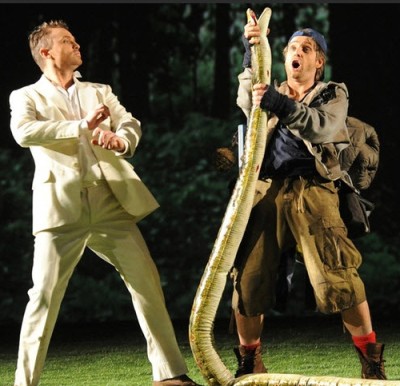 On the stage of Berlin’s historic Philharmonie concert house, principal conductor Simon Rattle preserved only the lightest touches of action derived from the orchestra’s recent fully staged production (at right) of “Zauberflöte,” directed by Robert Carsen, at the Philharmonic’s new Easter Festival home in Baden-Baden. But it was sufficient to convey the tenderness, convivial humor and elegance that this well-practiced cast had developed during their four performances in the southwestern spa city.

Rattle says he was astonished to learn that the Philharmonic had never before performed “Die “Zauberflöte” live before an audience — the Beecham recording in the ’30s was done in a studio, as was Karajan’s in 1980. Rattle also candidly admits in a pre-concert video that he spent half his life avoiding conducting the masterpiece out of a sense of self- preservation, because of its treacheries. Thus did novelty sparkle at the Philharmonie, whose bright clarity favored the detail and polish of a cut-down orchestra (only three double basses) nestled at the front of the stage. There was plenty of room for the singers, who made active use of riser space directly behind the orchestra and in front of the Berlin Radio Choir. Their interaction with orchestra musicians on matters of a certain magic flute, and some special bells, added to the charm.

It was a lesson, leaving sets and production trappings out of the equation. Both Lyric Opera of Chicago and Chicago Opera Theater presented Mozart’s “Flute” within the past year. Talk about either, and you’re soon into a mess of production issues.

How nice, for a change, to experience so little interference with one’s own perfect imagining, so little struggle against concepts that rub. Rattle’s musical restraint, lithe in line with springboard silences, was matched by playing to cherish from the Berliners, not least from the smiling sonority of principal flute Emmanuel Pahud.

The lights never went entirely out at the Philharmonie, so wherever one looked there were rapt listeners sharing a happy communal experience in the same room as the singers, without a proscenium separation. Casting care extended to small roles, adding to the special sense of occasion.

Veteran baritone José van Dam, pictured at right, Karajan’s Sarastro on record, was again on hand, still distinguished, as the Speaker. The three boys from the Aurelius Sängerknaben from Calw were to die for — how rarely is it that the boys are even properly heard in an opera house, let alone in tune and in earnest? The splendid trio of ladies — soprano Annick Massis, mezzo-soprano Magdalena Kožená and contralto Nathalie Stutzmann — hit delicious high notes in both music and comedy. And Mozart’s over-the-top cadenza for them in Scene 1, rarely performed, was as welcome as extra whipped cream on a sundae. 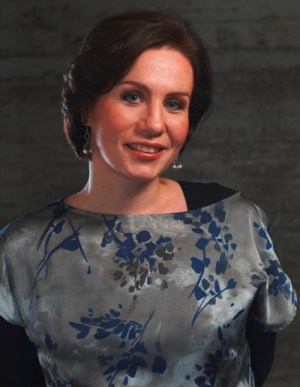 Bass baritone Dimitry Ivashchenko conveyed the noble assurance of Sarastro, his dark voice ringing and quite regal in the depths. And Ana Durlovski, pictured at right, was impressive in her run at the Queen of the Night’s dazzling coloratura, with pitches centered and confident at the top. The voice may not be huge, but it has the mustard to cut easily through the orchestra, and balance was never a problem.

In major roles, only soprano Kate Royal as the innocent Pamina seemed at times unsure, the voice fading to a lost-girl thinness in the orchestral mix, depriving us of the passionate vulnerability Mozart surely intended. But she was effective generally as an endearing slip of a thing, all femininity, tripping barefoot across the stage in a directorial carryover from Baden-Baden.

Too bad Tamino and Papageno didn’t also lose their shoes. The floor of the Philharmonie is a fully resonating participant in the luxurious acoustical mix, and thus Mozart took some percussive beating.

Tenor Pavol Breslik, as Tamino, was an elegant prince with heroic tendencies, and an excellent straight man throughout. The yearning beauty of “Dies Bildnis ist bezaubernd schön,” sung lovestruck to Pamina’s portrait, was an early musical highpoint.

Nagy, at right and below, is so gifted in natural, unforced funniness as Tamino’s birdcatcher sidekick that he was the instant audience favorite, easily readable as one whose impulses toward braggadocio, running the mouth and cowardly cleverness are all too human. Nagy’s diction was also superb, his voice a healthy burnished baritone, his musical choices invariably convincing. Though not yet large on U.S. radar, he’s worth watching for. 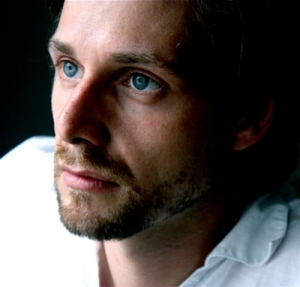 Captions and credits: Home page and top: The Berlin Philharmonic, principal conductor Simon Rattle and singers rehearse “Die Zauberflöte” in the Philharmonie April 2013.  (Courtesy Berlin Philharmonic) The streaming archive at www.digitalconcerthall.com. Pavol Breslik as Tamino and Michael Nagy as Papageno in the previously staged version of “Die Zauberflöte”, a Robert Carsen production at the Baden-Baden Easter Festival the week prior to the Berlin performances. (Courtesy Berlin Philharmonic) The Phiharmonie interior, during a performance by the Berlin Philharmonic and principal conductor Simon Rattle in 2012. (Photo by Monika Rittenhaus) Bass-baritone José van Dam. (Photo by Tanja Niemann) Coloratura soprano Ana Durlovski. (Photo by Martin Sigmund) Michael Nagy clowns around backstage at the Baden-Baden Easter Festival. (Youtube.com) Baritone Michael Nagy. Below: External shot of the Philarmonie in Berlin. (Photo by K. Schirmer) 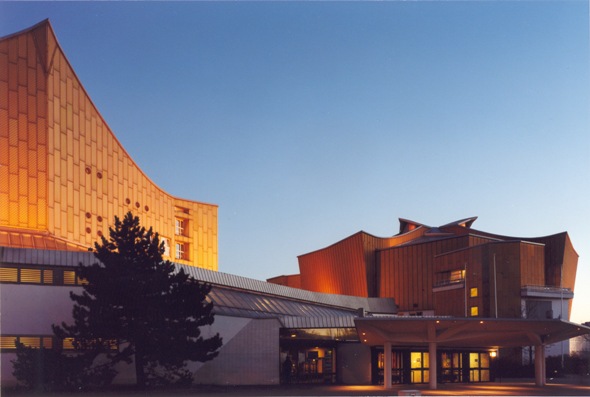