Like composer on the podium, Salonen leads Chicago Symphony in brilliant Mahler Sixth

The Finnish conductor Esa-Pekka Salonen shares a peculiarity of temperament and genius with Gustav Mahler. Like Mahler in his time, Salonen today stands among the most important conductors in the world. And again like his great forebear, Salonen would really rather be composing than be saddled with the responsibilities of music director for any orchestra you could name. Even one that might be looking for someone to succeed James Levine in Boston. I’m not saying anything, I’m just saying it could be a boffo combo, and Salonen could still compose, well, in the summer.

Which brings me back to the Salonen-Mahler connection. In his concerts this weekend with the Chicago Symphony Orchestra, Salonen offered a vital, lucid account Mahler’s dense and problematic Sixth Symphony that brought to mind a distinctive Mahler conductor of a generation ago, Leonard Bernstein. In his more rapturous moments, Bernstein liked to suggest that he was Mahler reincarnate. Observing Salonen’s precise, assured, utterly authoritarian revelation of the epic Sixth, I was captured by the thought that the conductor might as well have written this music, so off-handedly personal – and wholly unproblematic – was his tour through it. While Salonen has not (to my knowledge) claimed ghostly lineage to Mahler, as one composer giving voice to another, his reading of the Sixth Symphony spoke in accents native and natural.

What’s so challenging about the Sixth, among Mahler’s other cosmic creations, is a combination of its vast architecture, huge instrumental forces – a phalanx of brass players, quadrupled woodwinds, six percussionists – and extremely dense textures woven from concentrated counterpoint. The Sixth has at various times been tagged with the sobriquet “Tragic,” largely because at the end of its sweeping final movement, the music closes with the fierce stab of an A minor chord, as if reaffirming the work’s somber beginning. Yet, as Salonen’s account so eloquently argued, the Sixth Symphony is far too complex psychologically to be slapped with any label. It is indeed dark and turbulent, but within its emotional landscape fall exquisite episodes of lyrical aspiration, brilliant gamesmanship and Mahler’s typical wry humor.

All of these amazingly interlaced qualities factored into Salonen’s splendid Sixth. His conducting is a paragon of clarity, as exact as it is energetic. His beat is large, even scythe-like in its broad slashes, and yet never histrionic. Salonen is not a leaper. Physically trim himself, he leads with a lithe efficiency tempered by an easy lyrical fluency. He also has a composer’s ear for the collective elements of structure: tempo and rhythm, line and voicing. (I was much impressed by that mastery when I heard Salonen conduct the Los Angeles Philharmonic in a cycle of the Sibelius symphonies over several concerts in Paris a few years ago.) It is often said that Mahler’s symphonies are easy to conduct because the composer’s scores are detailed roadmaps; Salonen gives the impression of knowing not only the main road but also the byways by heart.

For all its grandeur, the Sixth Symphony often feels like chamber music written on a majestic scale, notably in the expansive opening and closing movements. Perhaps the most striking feature of Salonen’s interpretation was his constant attention to Mahler’s refined interplay among voices, which the Chicago Symphony’s principals tossed off with equal parts of bravura and warmth. As for the middle chapters, Mahler himself could never quite decide whether he wanted the stentorian scherzo or the tender slow movement to follow the symphony’s march-like opening. Like most conductors these days, Salonen placed the scherzo second, allowing the songful Andante as a respite before the big finale. The Andante was serene indeed, illuminated by the CSO’s lustrous strings.

The whole effect was a Sixth of transcendent beauty and passion as well as riveting intellectual engagement. As if the composer had conducted.

This program also featured the world premiere of James Matheson’s Violin Concerto, a scintillating virtuoso work that enjoyed the fleet-fingered advocacy of soloist Baird Dodge. Matheson’s three-movement concerto initially hurls the violin forward in an understated perpetual motion, then in the finale shoots off festoons of technical fireworks set against some wild rhythms in the basses. A gracefully formed slow movement affords a time-out in the excitement.

Matheson, a native Iowan, writes for the orchestra with imagination and confidence, creating especially fresh and inviting effects with brightly percolating woodwinds in the opening movement. The solo violin writing strongly recalls the piquant language of Prokofiev, though with added spice in the harmonic blending with the orchestra. At times, the ear strained to hear the soloist through Matheson’s richly spun orchestral fabric. But the zesty concerto got a zealous reception from an audience that showered its appreciation on the 41-year-old composer. 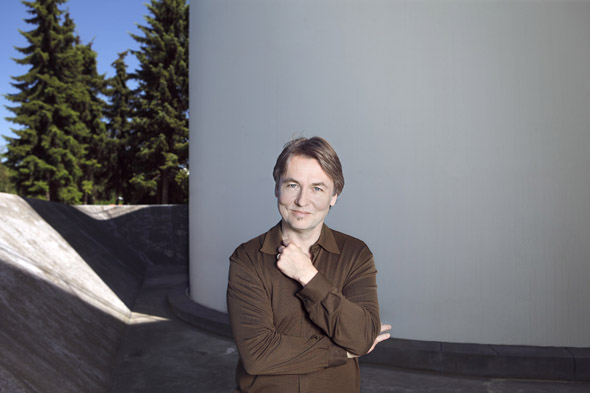