Appreciation: The showgirls of Broadway’s “Follies” have histories of their own.  Hats off to these flawless charmers and their former selves in a present — and past — perfect production.

New York City — The current production of  James Goldman and Stephen Sondheim’s “Follies” on Broadway is such a legend in the making that it’s deplorable to see even one seat unoccupied at the Marriott Marquis.

Tickets are pricey, $145 for the best, but one can find them discounted now through the end of the run in late January, and it would be a shame to miss Jan Maxwell, Bernadette Peters, Elaine Paige and the parade of other Broadway bests in roles that will never be more perfect for them.

Money was lavished on this production, which started at the Kennedy Center in Washington D.C.  So was love. There is an orchestra in the pit with enough strings to sound lush. Spectral showgirls, extraordinarily beautiful in their dusky beads and broken feathers, hover in the periphery of a derelict palace of entertainment.  Choreographer Warren Carlyle channels Michael Bennett’s original style of character-revealing dance, and the cast is one for the ages.

The story involves a festive gathering of old Follies girls who graced the Weismann Theater from 1918 into the ’40s. It’s now 1971, on the eve of the theater’s demolition, and the happy reunion is by turns blissful, bawdy, boozy and devastating as the hoofers rummage through the mixed bags they’ve made of their lives. 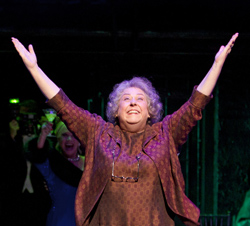 More than a dozen of Sondheim’s songs from “Follies” have made it into the Great American Songbook and the show offers them up in a parade of star turns for actors with a past of their own.  The gal who sings Hattie’s number “Broadway Baby”  is Jayne Houdyshell, born in 1953, who worked for a quarter century in the regions — including Chicago’s Steppenwolf  — before she became an overnight success on Broadway in her debut at age 52. (The “overnight” success that’s anything but overnight is a familiar Broadway story in its own right.)

Several of the other headliners in this “Follies” revival have been on the world’s main stages for so long we can actually enjoy a web counterpart to the “Mirror, mirror” refrain going on in the show.  Let’s take a look:

Bernadette Peters, now 63, plays the 49-year-old Sally who married the wrong guy, lives a boring life in Phoenix and remains obsessed with the Ben who got away. Her torch song, “Losing My Mind,” ends in near-disintegration when she realizes she was nothing but a fling.

Rosalind Elias, now 82, plays Heidi, the oldest showgirl on the stage, and her song “One More Kiss” is in the style of a turn-of-the century Viennese operetta.

Mary Beth Peil, now 71, is Solange, wonderfully sexy in her own skin, as she sings “Ah! Paris!”

Jan Maxwell, now 55, steals the show as Phyllis, too sophisticated to care about her husband’s neglect until she releases the volcanic fury of “Could I Leave You?”

To see these extraordinary performers is to wish they could live forever and have nothing but good luck. It doesn’t work that way, though.

Terri White, now in her mid-60s, plays the hearty belter Stella Deems. Stella persuades the others to sing and dance one of their old numbers, “Who’s That Woman?”, as best they can from memory.  (You’ll find a clip from this number, which is great fun, at the very end of this article.) It involves the “Mirror, mirror” sequence in which they are joined by their younger selves, and it is mesmerizing.