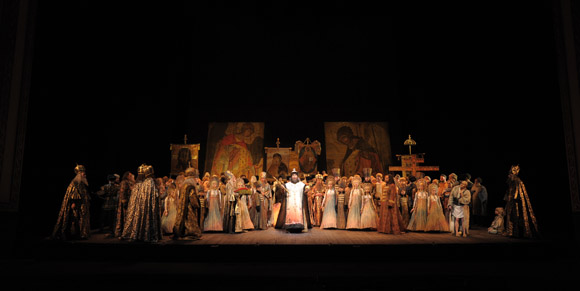 Review: “Boris Godunov” in Mussorgsky’s original seven-scene 1869 version at the Lyric Opera of Chicago through Nov. 29. ****

Lyric Opera of Chicago has revived its preferred version of Modest Mussorgsky’s tragic opera “Boris Godunov.” I’m glad it’s back. Mussorgsky’s epic Russian psychodrama, as he originally conceived it in 1869, drills unrelentingly into the soul of a Russian czar. 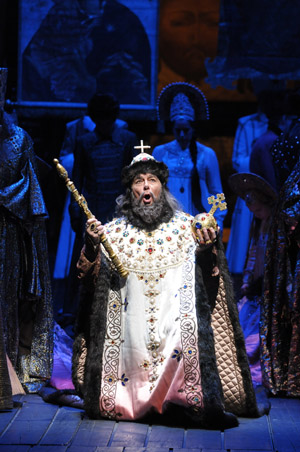 Boris cleared his own path to the throne by murdering the brother-in-law who stood in his way. The catastrophic results are straight out of Greek tragedy, which never lets anyone off the hook. Boris was increasingly crazed with torment over his own guilt.

The czar’s public disintegration fixated the realm and was made the subject of a drama in verse by Russia’s greatest poet, Alexander Pushkin. (Pushkin wrote it in 1825 but it was not approved for performance by the censors until 1866. ) Mussorgsky carefully adapted entire scenes from Pushkin’s play when he first brought the opera to life.

We know this guy Boris. He’s the Russian equal of Shakespeare’s Lear, Hamlet, Othello in myth-worthy comeuppance, not to forget Nixon, Hussein, Gaddafi and the financial titans whose sorry tales keep us glued to the screen.

But knowing Mussorgsky’s opera is a bit more difficult. There’s the question, “Which one?”  Mussorgsky himself would create a newer version 1872, with additional music, a different structure, a more lyrical feel, a love interest and other adjustments aimed at getting the opera produced. After his death in 1881 the sprawling source material was further manipulated by composers and producers whose enriching, re-ordering and re-fashioning went on for decades, sometimes achieving significant artistic success. Rimsky-Korsakov’s elegant orchestration, the most often performed until recently, is a case in point.

And yet, there is something elemental and searing about Mussogsky’s original 1869 version of “Boris.” From this viewpoint in 2011, it seems modern in its own right, especially in this vividly stark Lyric Opera production, which was first created for the Geneva Opera in 1992  by the Norwegian director Stein Winge and the Swedish designer Swede Göran Wassberg, a team steeped in the similarly brutal naturalism of Strindberg and Ibsen.  The same production opened the 1994-95 season at the Lyric. It’s an effective unit set, with a floor that curves into the back wall, rather like the inside of a ship’s hull,  perhaps a visual metaphor for Boris adrift.

As for Mussorgsy’s brooding colors and sometimes shrill, hollow sounds, they are no problem for Americans reared on “Psycho.” And with the Chicago Picasso just down the street from the Civic Opera House, we surely do not need to worry whether great primitivist art has the slightest need of European refinement. 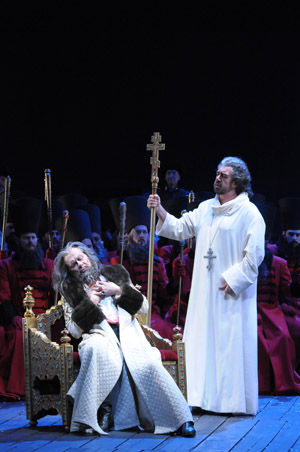 One reason the original “Boris” will be kept alive as an option is that the stars who sing Boris love it. And why not? The Czar is the unrelenting focus of the last three scenes in this version of the opera, constituting a star turn of mesmerizing psychic disintegration and pathos.

These last scenes are a tour de force, showing Boris earnestly reveling in a few moments of domestic intimacy with daughter and son, and then turning by degrees paranoid, vengeful, burned out, superstitious, guilt-ridden, paralyzed and ultimately desperate. His dying farewell “Proshcháy, moy syn,” to his boy, who will himself be instantly in mortal danger, brings down the curtain.

Ferruccio Furlanetto makes his Lyric Opera debut as a thoroughly seasoned Boris who has sung the role in St. Petersburg, Milan’s La Scala, Vienna and Rome. His is not the profoundly low voice with a penetrating edge that one tends to think of as a classic Russian bass in the tradition of Chaliapin. No matter. His sound is rich and abundantly lyrical, and his Boris is sorrowful, deeply felt, communicating with a simple directness as natural as speech itself. Furlanetto is also a striking physical presence onstage, a Boris already half-crazed when we first see him, with sustained tension in his manner, constantly on guard. Even when he is silent, Furlanetto lends legitimacy to the currents threatening Boris.

Stage director Julia Pevzner has worked with this well-traveled “Boris” at both the Houston Grand Opera and the San Francisco Opera, where she took over Winge’s production. The onstage role of the Holy Fool (sung plaintively by tenor Edward Mout) is expanded to good effect. We get the impression that Boris is used to having him around, a haunting presence that gives counterpoint to Boris’ increasing discomfort. The fool utters truths that others would be killed for, as he drags himself about in miserable chains while carrying a miniature replica of the golden onion dome of the Cathedral of the Assumption, scene of the czar’s coronation. Does Boris see himself in him? 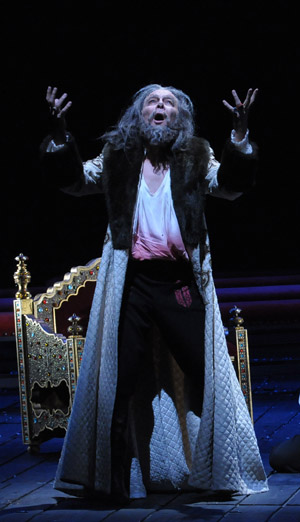 There are other interesting character touches.  Boris’ son Fyodor (mezzo-soprano Emily Pons in another fine trouser role) behaves like any young son as Boris tries to explain his (boring) future responsibilities.  Tchelkalov, as the clerk of parliament, (baritone Ljubomor Puškarić in his promising Lyric debut) serves as a solemn foil to the madness,  lending the impression of dignity and decorum to public proceedings even as they are falling apart.

Pimen, the aged monk who has spent his life writing the history of Russia, comes across as more than a passive teller of truth for the ages. Is he an active instigator? Bass Andrea Silvestrelli was conscientious  and authoritative in the role,  wonderfully deep in voice,  passionate in his righteousness. You get the impression this monk took decades to carefully convince himself of the truth, and now he is unshakable.

The unquestionable threat to Boris is Shuisky, the crafty prince who manages to stay close, Iago-like, planting terror and suspicion. Tenor Štefan Margita, in his Lyric debut, moved and sang with smooth, snakelike elegance. As Boris’ s son crouches over his father’s body and realizes he is alone in the world, the stage director positions Shiusky facing away from the audience, poised to move in.  What is that he’s holding behind his back?

Among those who may be working hardest are Lyric Opera Music Director Andrew Davis and the musicians of the Chicago Lyric Opera Orchestra. While remaining loyal to the intent of Mussorgsky’s original score, they are doubtless stretching themselves to the limit to tweak, reinforce and otherwise gently prod Mussorgsky’s dark, visceral orchestration into something that fills that large opera house so successfully with doom and splendor. My hat is off to them.

The Lyric Opera Chorus, prepared by Michael Black, is very busy as well, representing the soul of Russia in great and beautifully sung hymns of patriotism and suffering. They are our surrogates, simple citizens without inside knowledge, who somehow sense the truth anyway.

As for having naughty fun onstage, you can’t do much better than heckling an old fool in the town square, which is what the Chicago Children’s Choir charmingly and convincingly does, while singing like a band of angels, of course.  (The child singers were prepared by Josephine Lee.)

And in a boisterous scene of comic relief, bass Raymond Aceto played the drunken monk Varlaam, who is on the lam with his sidekick Missail (tenor David Cangelosi). They are joined by Grigori, the young monk turned liar who has determined that God wants him to pretend he is Dmitri, the not-dead-after-all rightful heir to the throne. It’s a brash and clever role and  tenor Erik Nelson Werner is a natural for it.

This is a “Boris Godunov” not to miss. But there is something about the current worldwide move towards Mussorgsky’s 1869 original that seems more like a trend than a final judgment to me.

We cannot know what was on Mussorgsky’s mind when he proposed his revised and complete second version of this opera, with its additional scenes and its more lyrical sensibility.  Or whether, had he lived longer in good health, he would have acquiesced gratefully or argued vehemently against the so-called musical improvements that Rimsky-Korsakov offered, not to mention the many cuts and substitutions that producers invoked.

So if someone tells me I can only take one version of “Boris” to my desert island, I’ll put a CD of this version in my bag. But I’ll also sneak a couple of others onto my jump drive.

Photo captions and credits: Top:  Coronation of Boris. On the right, top to bottom:  1.Boris (Ferruccio Furlanetto) prays he will rule wisely; 2. Boris (Furlanetto) is driven to the brink of madness with a story told by the monk Pimen (Andrea Silvestrelli); 3. Boris dies.  Additional images below: 1. The Holy Fool (Edward Mout) is taunted by the children; 2. Boris is portrayed in psychological isolation even though he is in public with Pimen and his parliament of boyars. (All production photos ©Dan Rest) 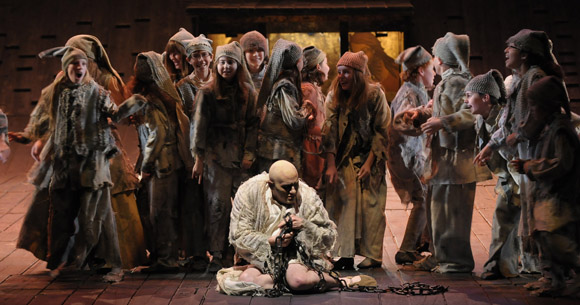