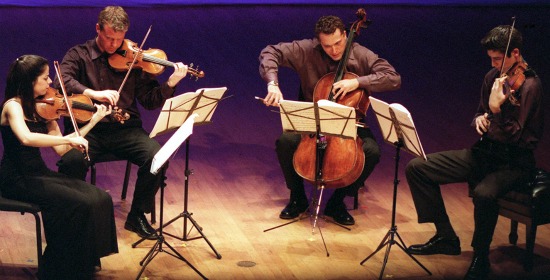 Perhaps it was a pragmatic choice for the Pacifica Quartet to pair string quartets by Beethoven and Shostakovich for its first appearance of the season Sunday at the University of Chicago’s Mandel Hall. The Pacifica foursome has been performing complete cycles of both composers’ quartets internationally over the last couple of seasons. This music is on their fingertips.

But the matchup also offered a stunning reminder that the quartets of Shostakovich stand shoulder to shoulder with Beethoven’s as exemplars of the form, great and deeply personal expressions of two boldly original artists.

The Shostakovich was his String Quartet No. 3 in F (1946), the work of a 40-year-old master and one laboring under a political regime that had taken him harshly to task a decade earlier and would do so again two years hence. But not for his string quartets. While the Soviet minders of socialist realism in art – and that often meant Josef Stalin himself – closely monitored public works such as symphonies and operas, chamber music might without notice or censure veer onto more venturesome pathways.

Not surprisingly, it was in the comparative privacy of his chamber music that Shostakovich mirrored the pain and distress, the sheer spiritual burden, of Soviet life as he experienced and observed it. Over a course of five movements, the Third Quartet seems to reflect a thousand facets of the human comedy as it was played out under the Stalinist boot. And the Pacifica Quartet’s dramatic, burnished performance went straight to the music’s ironic and troubled core.

From the wry smirk of a tune that opens the work to the ferocity of the pivotal third movement and the finale’s Mahlerian careening through emotional distress, this was playing of searing intensity. The Pacifica’s intimate familiarity with Shostakovich, the accents of his language and the convolutions of his psychology, told in an ensemble give-and-take made grand theater of music finely writ. It was also a performance that pointed up the composer’s technical finesse as well as the sometimes overwhelming power Shostakovich achieves by deceptively slight means – as in the quiet pathos that framed the fourth-movement Adagio.

The tragic magnificence of this prime Shostakovich conceded nothing to the gruff brilliance the Pacifica brought to Beethoven’s String Quartet in C, Op. 59, No. 3. Indeed, both works reveled in first violinist Simin Ganatra’s capacity for headlong virtuoso display. Her combination of no-fear aggressiveness and interpretive confidence lit up Beethoven’s stormy quartet – his contemporaries were quite sure the poor deaf soul had lost his way – as surely as the Shostakovich. For all its polish and fluency as a foursome, the Pacifica is fortunate to have Ganatra’s effortless elegance and unassailable brashness in the first chair.

There’s something amiss about referring to the Beethoven three quartets of Op. 59 as “middle-period.” They aren’t middle anything, as this energetic, brightly humored performance attested. They are works of staggering originality, vision and authority, and the C major Quartet illustrates all of that in spades. It stretches both traditional forms and the capacity of the instruments to create enough sound. Beethoven was infamous for breaking pianos. Here he tries to demolish two fiddles, a viola and a cello all in one sweep – all with many a good laugh.

I think that’s what I loved about Pacific’s performance of Op. 59, No. 3, as much as anything: Its wonderful, embracing humor, which I suppose could also be construed as red-blooded zeal. The bravura spirit of the opening movement, like the impulsive stop-and-start trajectory of the finale, exuded a youthful freshness that surely would have appealed to the 38-year-old composer. And the Minuet, marked “Grazioso.” Right. That’s how it began, as if Mozart might have written it, only to erupt into a stomp. This was Beethoven the rebel. Middle Beethoven – in the middle of another storm.

The concert opened with the last of Nikolai Miaskovsky’s 13 string quartets, a gently – almost benignly – Romantic work in A minor (Op. 86) written in 1949, the year before he died at age 69, officially chastised as a “formalist” by the protectors of Soviet socialist realism. You have to wonder what the commissars were listening to; surely not this lovely, tuneful string quartet evocative of nothing more daring than Dvorak. The Pacifica delivered a sweetly tempered account.