Amid Beethoven and Shostakovich quartet cycles, Pacifica to glimpse both at University of Chicago 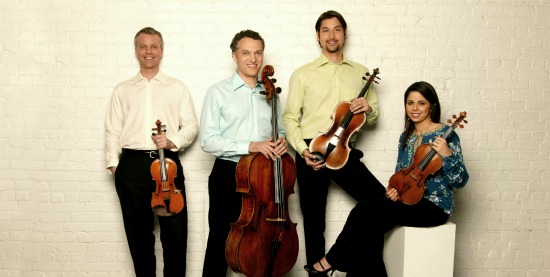 The Pacifica Quartet has been playing complete cycles of Beethoven’s 16 string quartets and Shostakovich’s 15 in international venues over the last couple of years. Violist Masumi Per Rostad talks about the enduring importance of both composers.

It seems parallel lines meet after all, and this side of infinity. One pair will converge Sunday afternoon when the Pacifica Quartet opens its 2011-12 residency series at the University of Chicago.

“The Shostakovich Third is a seminal work, almost symphonic,” said Pacifica violist Masumi Per Rostad, “but it also shows him moving forward in his thinking. You still hear the influences of the Russian tradition, but now he’s more embracing. He takes everything around him and processes it in a wonderfully cohesive way.”

The Third Quartet (1946) is one of Shostakovich’s most frequently performed and most popular works.

“I have my own theory about its great popularity,” said Rostad. “He’s bringing to the table this very well thought-out tradition, but also the skill of a film composer who knows how to make a good effect. It’s very expressive music, in the spirit of Tchaikovsky. You hear what could be a reference to something, but you’re not sure what. Is that familiar or not? It’s like a dream state.”

The Third Quartet is a bit of an encore to the complete Shostakovich cycle the Pacifica played in Chicago last season. It also reflects the ensemble’s continuing immersion in the Shostakovich quartets. Earlier this fall, Rostad and his colleagues – violinists Simin Ganatra and Sibbi Bernhardsson and cellist Brandon Vamos – performed the first eight at Wigmore Hall in London, where they will conclude the cycle in March.

And the first installment of a complete CD recording of the Shostakovich quartets has just been released on the Cedille label. That two-disc set will be followed by three more double packs at six-month intervals through spring 2013, Rostad said.

Pacifica, formed in 1994, is in its 12th season of performance-based residency at UC. The quartet also has held faculty status at the University of Illinois in Champaign-Urbana since 2003. The group will perform six more times in Chicago during the 2011-12 season. Next up is a joint Contempo concert with eighth blackbird Nov. 15 at the Harris Theatre.

Even as their Shostakovich train keeps chugging forward, the Pacifica Quartet has committed itself to comprehensive traversals of Beethoven. Last week, they performed the first part of a projected cycle at the Metropolitan Museum in New York City, and in March they’ll begin a multi-visit cycle in Denver.

Rather less conventional was Pacifica’s Beethoven sweep last summer in Tokyo’s Suntory Hall – all 16 quartets in a span of 48 hours over three days. “That was pretty crazy,” said Rostad, “but it must have been especially demanding for the audience. We were so impressed by the level of concentration in the hall. It was just amazing.”

While Pacifica prides itself on stretching the quartet medium, through commissions of new works and creative collaborations like their frequent ventures with UC artists eighth blackbird, Rostad said the group has lost none of its zeal for bedrock classical repertoire like Beethoven.

“In terms of reverence, it has only deepened,” he said. “The more you play the music of any single composer – whether it’s Shostakovich or Beethoven or Mendelssohn or Elliot Carter – and the more intimately you come to know them, the richer becomes your appreciation. They actually become more relevant, more important. With today’s movement toward cross-over and the blending of styles, it’s important that we keep one foot in history. If you don’t have that understanding, it’s hard to move forward.”

Rostad paused, then added: “There’s a potential problem with mixing styles (in contemporary composition). A lot of it can feel rather cheap, or it’s done just for the sake of ‘wouldn’t that be interesting?’ I think that’s part of a new bravado approach we’ve seen, especially (in some young musicians) in New York. ‘How little time can I possibly spend rehearsing this piece and still play it?’

“We just performed with (pianist) Menahem Pressler, who’s in his upper eighties now. (The founder and longtime mainstay of the Beaux Arts Trio will be 88 on Dec. 16, a birthday he shares with Beethoven.) We played the Shostakovich Piano Quintet, a piece he’s been playing for the last 50 years. In rehearsals he was relentless, always seeking a fresh interpretation. He wasn’t satisfied just knowing how the piece goes. As a quartet, we try to do that.

“When we walk on stage, we want our insights and our differences to be resolved and forged into a Pacifica Quartet interpretation. That’s a process of exploration, and it takes a long time.”