In a meeting of grey eminences, Haitink scores a fine first in Haydn’s oratorio ‘The Creation’ 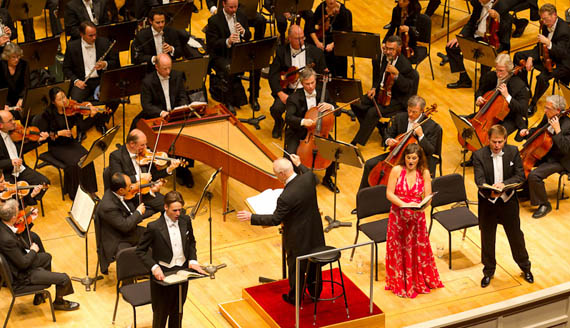 Is there an optimal year in one’s life to conduct a masterpiece of Haydn for the first time?

In the case of Dutch conductor Bernard Haitink and Haydn’s oratorio “The Creation,” the magical number would appear to be 82.

It was a joyous occasion at Orchestra Hall Thursday, when Haitink conducted the Chicago Symphony Orchestra and Chorus in Haydn’s greatest work for soloists, chorus and orchestra. The oratorio is deeply touching, based on the Judeo-Christian creation story from the Book of Genesis, with overlays from the 17th-century English poet John Milton and other sources. It is also a big work to prepare and manage, requiring three solo singers accompanied by fortepiano and cello continuo, a full orchestra complete with contrabassoon, horns, trumpets and trombones, and an ample mixed chorus.

The first big payoff came within minutes of the downbeat, as Haydn’s depiction of chaos, a quiet disconcertion of anxious harmony, made way for the stunning choral-orchestral outburst, “And there was Light.”

“The Creation” that Haitink has, at last, undertaken also happens to be a late project of Haydn. But it is far from the angst-ridden wrestle with death that characterizes many masterpieces by creative artists in their late years.

Quite the contrary, “The Creation” is lavished with love, tender wit, and almost childlike wonder in its re-imaginings of the world’s emergence from formless void to the creation of Adam and Eve. Haitink’s gentle approach was all intelligence and light, supporting a trio of gifted singers who had the words well in control, and a chorus and orchestra that paid assiduous respect to the need for simplicity, balance and proportion.

Haydn’s oratorio ends while Adam and Eve are still inside the Garden of Eden and it includes only the slightest of cautionary winks at the fall from grace that is yet to come. Haydn had resolved to create his own choral-orchestra masterpiece in the Handelian mode after hearing “Messiah” in London. He traveled home to Austria at age 63 and set about the task almost immediately, no doubt with “Messiah’s” optimistic final chorus still ringing in his head.

But the upbeat ending probably also suited Haydn’s overall temperament while he was absorbed in his labor of love. “The Creation” is that too-rare phenomenon for geniuses of all generations — the late outpouring by an artist who was also healthy, financially successful and personally content in the knowledge that his music was deeply appreciated. Mozart, seven years gone to a pauper’s grave when “The Creation” was first performed in Vienna, is the more familiar blueprint.

First-time listeners will revel in Haydn’s clever sound-painting of the thundering winds and foaming waves, roaring lions and nimble stags that emerge in the litany of God’s creative handiwork. And although the history of music is filled with composers’ mimickry of animals, my all-time favorite is Haydn’s sinuous worm in “long dimension.” It deserves pride of place in the menagerie of Janequin’s cuckoos,  Josquin’s crickets, Vivaldi’s flies, Saint-Saëns’ swan, Prokofiev’s cat, Wagner’s dragon, etc., not to forget Messiaen’s entire aviary.

The worm is a star performer in the recitative of archangel Raphael, sung to slithering perfection by German bass-baritone Hanno Müller-Brachmann. He is ideal for the oratorio’s baritone roles, capable of snarly darkness at the bottom of his range, gleam at the top, flexible and altogether easy to understand. From the first moments of his recitative “And the earth was without form and void” to the close of the sixth day, Müller-Brachmann mesmerized. His third-day aria, “Rolling in foaming billows,” about the formation of the seas, was another highlight.

Swedish soprano Klara Ek, who made her CSO debut last week in Mahler’s Fourth Symphony, brought much the same pure-voiced clarity to archangel Gabriel’s lovely aria, “With verdure clad the fields appear delightful.” It was beautifully done, if her work elsewhere seemed somewhat less finely wrought than that of Müller-Brachmann and English tenor Ian Bostridge.

As archangel Uriel, Bostridge’s aria of sunlight, moonlight and starlight — “In splendor bright” — was another showpiece of emotional specificity and penetration. The soloists’ narratives were elegantly underscored by the continuo playing of fortepianist James Johnstone and cellist John Sharp.

Duain Wolfe’s well-prepared singers in the Chicago Symphony Chorus were arrayed on risers at the back of the Orchestra Hall stage, and the whole prospect afforded a splendid sight from Orchestra Hall’s upper levels, where the sound, though bright and clear, could roll and linger. 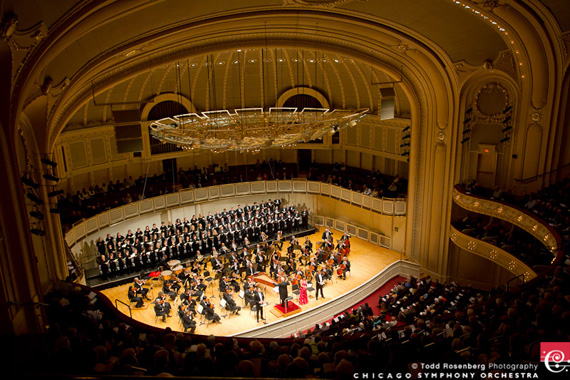