The 2011-2012 season of MusicNOW is upon us, and the curators of these contemporary concerts have elected to intensify the experience with theatrical lighting, a darkened house and projected visuals.

In the steeply raked auditorium of Harris Theater at Millennium Park, where MusicNOW takes place under the auspices of the Chicago Symphony Orchestra, Mead composers-in-residence Mason Bates and Anna Clyne are clearly wishing to shed the 19th-century orchestra performance traditions that have been essentially frozen for decades and that seem off-putting to tech-savvy sophisticates brought up on movies, MTV, DJ clubs and stadium tours. As the energetic and high-interest mix of stomping, tumbling and ping-ponging music got underway Oct. 17 before a crowd having fun, one sensed the idea’s not yet fully developed. I would have loved to watch live over-the-shoulder close-ups of marimbist Cynthia Yeh and violinist Yuan-Qing Yu as they attacked the agreeably oddball and ever-morphing rhythms in Alejandro Viñao’s “Tumblers.” Instead, I suffered from what I’d term visual dissonance.

The performers onstage looked small, sounded large, and represented only part of the 60-year-old Viñao’s high-intensity sonic palette. An offstage computer piped in more music, while the projections were basically devoted to titling and description. I found myself wanting the big screen to help me “see” the other sounds and to get inside those elusive rhythms more. The screen set up an expectation, in other words, that went unrealized.

That’s hardly  an argument to get rid of it, rather a reason to keep on experimenting. Every new layer of production expands the complexity of presentation geometrically, that’s for sure. The dramatically lit area behind the proscenium, colorful costumes and pleasing use of the stage’s floorspace are signature features of MusicNOW. It makes sense that coordinated images and video should play a greater part.

The evening itself offered a pleasing international mix of four emerging composers, all present to talk about their works, and one icon – John Corigliano, not in attendance. His virtuoso violin piece “Stomp” must have weeded out the clutzes pretty quickly at the 2011 International Tchaikovsky Competition, held in Moscow in July.

American violinist Nigel Armstrong, 21, a double prize-winner in Moscow, tossed off a work that presented three specific challenges — re-tuned outer strings to relocate pitches, a barn-storming style more akin to country fiddle than to concert, and some highly syncopated foot-stomping to further bamboozle the competitors. Armstrong pulled it off riotously well,  complete with a behind-the-back flourish. You can enjoy it again in this YouTube clip from Moscow, with Corigliano rapt in the audience.

At the concert’s other end was a work by the Irish composer Donnacha Dennehy, 41,.dedicated to his teacher, the late Herbert Brün. Brün was a German-born electronic music pioneer of the first order, a lion in his day, contributing to the international renown of the electronic studio at the University of Illinois in Champaign-Urbana, where he began teaching  in the ’60s. His “Mutatis Mutandis,” composed in FORTRAN and consisting of computer-generated graphics that were to form the basis of performers’ own spontaneous compositions, was cutting edge, required study in the early ’70s, when his influence was at its greatest. Many modern principles of psycho-acoustics, timbre manipulation and sound creation owe a debt to him.

Dennehy is an imaginative, fully-formed composer who obviously shares the keen interest of his teacher in the engineering of new worlds of sound. The soprano voice written into his 2001 work, “To Herbert Brün,” is not so much a singer but a sound producing instrument of astonishing variety. We hear gutteral explosions, inhaled breaths, every manner of vowel stretched into dipthong, yeahs and hahs and hisses, along with great glissandi and short motifs, formulated into a nearly wordless language of compelling dramatic effect.

Similar expressive power is achieved through unconventional means by the other voice-like instruments on the stage — tenor trombone, tenor saxophone and double bass. And all of this is mixed into an landscape of industrial and urban computer-generated sounds that take on haunting beauty. Soprano Carrie Henneman Shaw, saxophonist Jeremy Ruthrauff, trombonist Charles Vernon and bassist Daniel Armstrong, conducted by Cliff Colnot, were impressive throughout.

Two works at the concert’s center offered other pleasures: The projected translation of Pablo Neruda’s fourth sonnet, of love and remembrance, fell out of sync with 32-year-old Kirsten Broberg’s unabashedly lyrical setting, which was too bad. But “That Time,” for soprano and chamber ensemble, didn’t really need the words to explain the mood of her tranquil, watery, translucent sound world.

And 33-year-old Paula Matthusen’s “run on sentence of the pavement” seemed to promise the delightful diversion of a grand piano played, in part, by ping-pong balls bouncing around the piano’s inside. It was that, but much more — an encyclopedic reminder that a composer who knows how to listen can find music in the most amazing places. Her mixture of computerized sounds with the ringing harmonics and timbral distortions of a piano plucked, hit and stroked from the inside might put the venerable George Crumb to smiling. 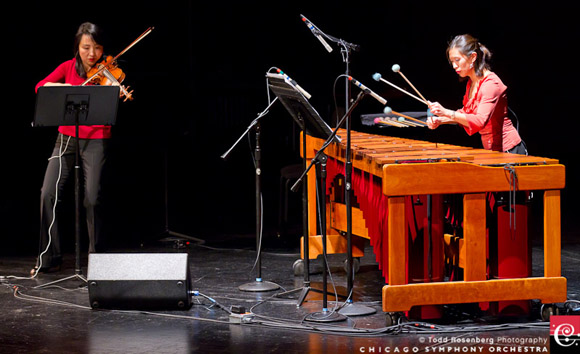