Opera and theater lovers who know Verdi hits such as “Rigoletto,” “Il trovatore,” and “La traviata” are often surprised to learn how he sometimes made changes for years after their premieres. Not only to adjust for the limitations of a country’s customs, or a singer’s particular gifts, or the censor of the day. But also, occasionally, to pursue something fundamental, perhaps yet unrealized by the composer himself, just waiting to be brought into focus.

Verdi’s “Don Carlos” seems like such a work. Now playing at Lyric Opera of Chicago, it first showed up in 1867 – in Paris and in French as “Don Carlos,” and then in London in Italian as “Don Carlo” – both in that first year. But Verdi was hardly done refining. By the time of its final-final adjustments, for Modena in 1886, Verdi had used six writer-collaborators. He had also begun a new collaborative partnership with the brilliant composer-librettist Arrigo Boito, whose direct impact on Verdi would become apparent in “Otello” and “Falstaff,” the supreme efforts of the composer’s eighth decade. (When Verdi died in 1901, Boito was at his bedside.) 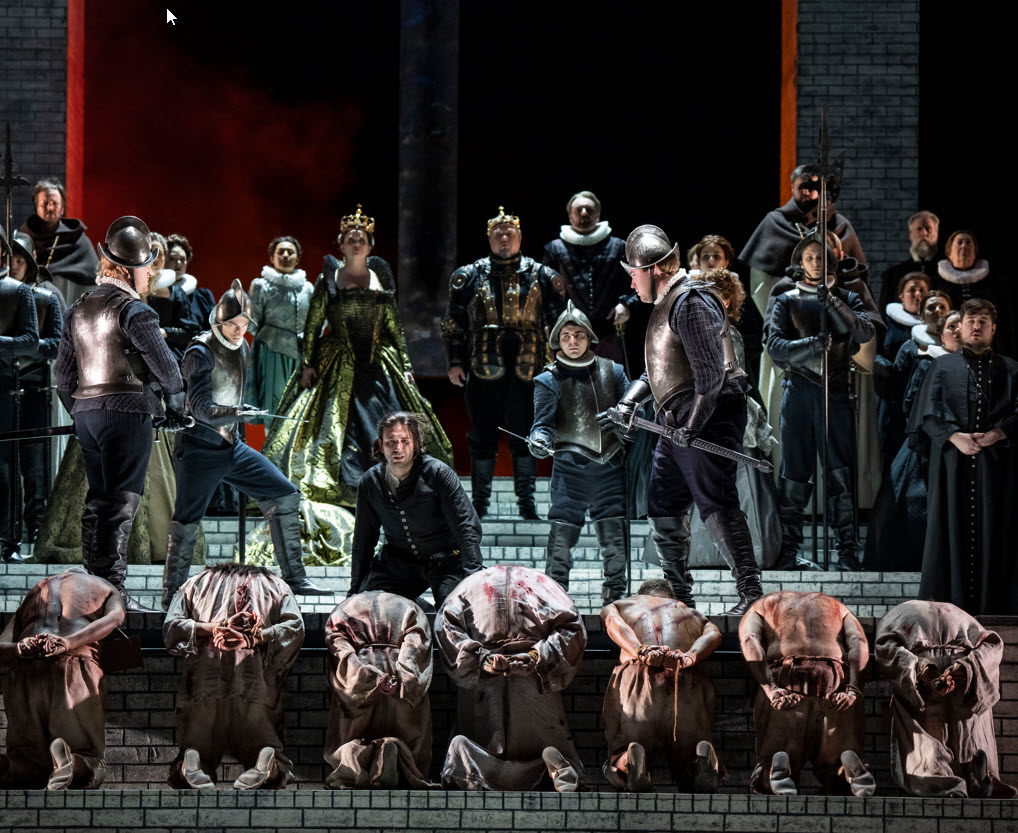 Heretics are condemned to death by fire. “Don Carlos” is set during the Spanish Inquisition.

Boito did not pen a word in “Don Carlos.” (The composer was working with librettists Joseph Méry and Camille du Locle.) But in Verdi’s most profound scenes – which capture the irreconcilable anger between King Philip and his thwarted son, and between this same King and the Church’s terrifying Grand Inquisitor, from whom not even a King dared to shrink – one senses the impact of Boito’s influence. And considering that you’ve also got star-crossed lovers in the King’s son Don Carlos and the woman who is all but ripped from Carlos’ arms to be wedded by the father instead, there’s stuff worthy of Shakespeare in the telling.

The fascinating problem with the Lyric Opera  production – beautifully conducted by music director Enrique Mazzola, especially in the mystical, delicate parts – is that there is almost too much of it. A Thanksgiving feast comes to mind, that overwhelmed sense that can develop before the third helpings are passed and desserts loom. The fifth and final act ends, as it must, in defeat and death, with Verdi’s music at its most painfully exquisite. Would Boito have convinced Verdi to make further cuts had the poet been directly involved in the project? Probably not. 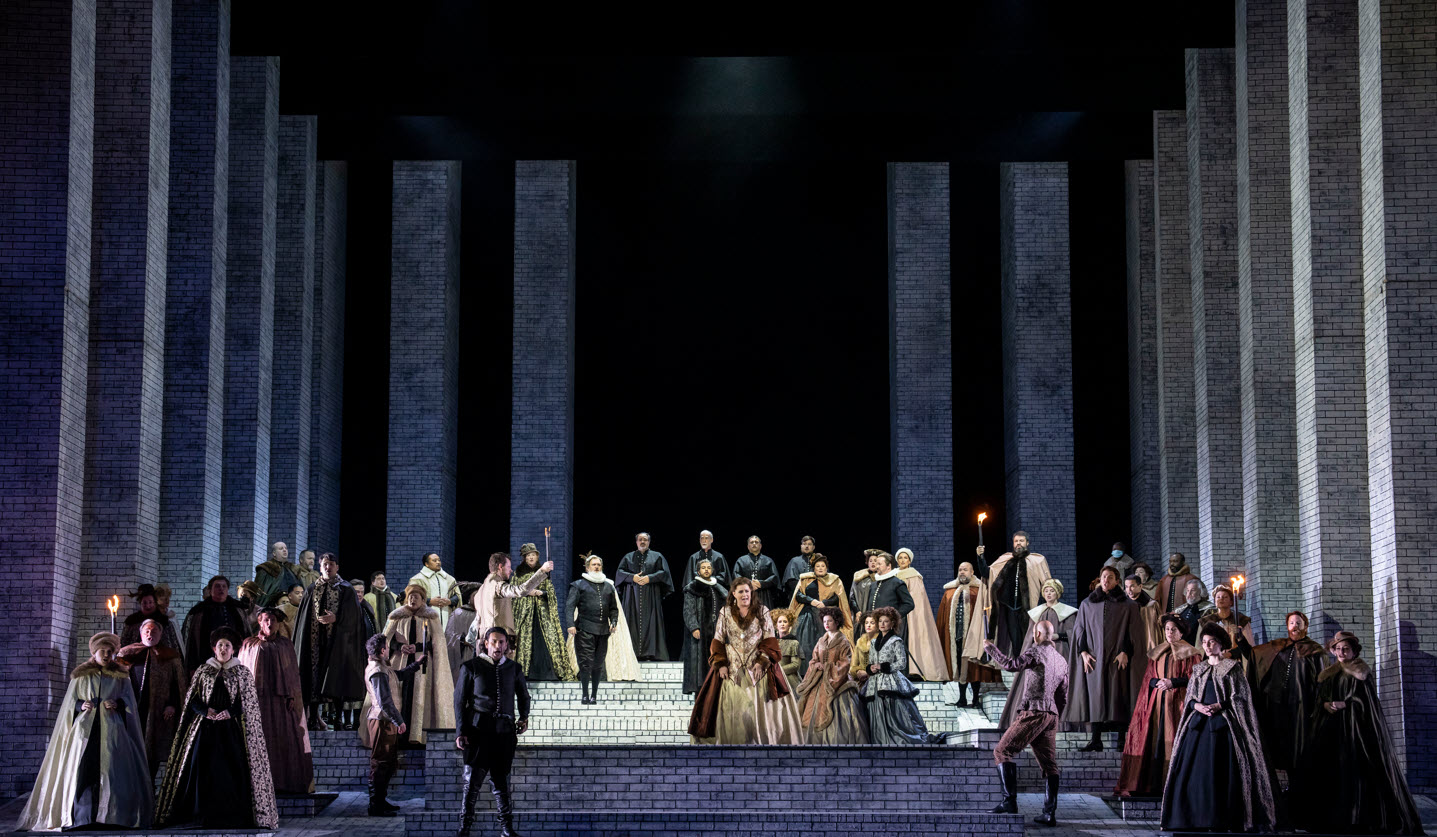 Lyric Opera’s presentation is a Frankfurt Opera production by David McVicar with sets by Robert Jones. Axel Weidauer is the revival director.

Would a second intermission at Lyric be a better idea? Maybe. Would a physical production more lavish, more brimming in visual variety than Robert Jones’ monumental, monochromatic unit set have helped? I think so. But assuming this Frankfurt Opera production, made up mostly of walls of tile, was chosen at least in part with a post-Covid preference for keeping backstage work to a minimum, the unit set was an understandable choice. Conceived and originally directed by Sir David McVicar for Frankfurt, it was revived here by Axel Weidauer, who did well enough with it, inherently limiting as the original concept seemed to me. One was left to imagine the stained-glass and glitz that are so often on hand for these regal tragedies – such as the gilded splendor we were given, earlier in this Lyric season, with Verdi’s “Ernani.” 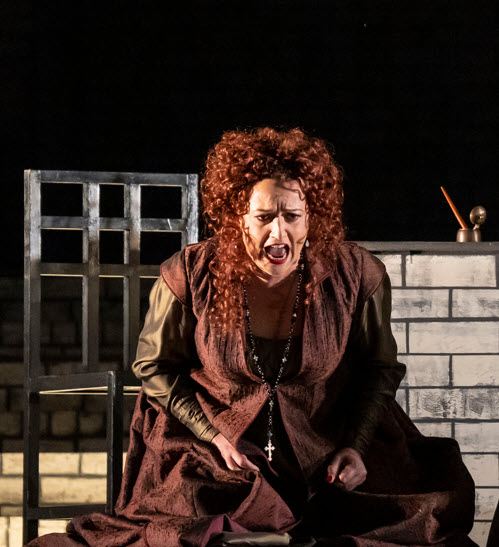 “Don Carlos” is best approached like a five-act Shakespeare play; if it seems overwhelmingly rich, you take in all you can absorb, and you go back to it over time. If there was not much variety in the visual settings here, the music itself was impressive. The strong cast had several standouts, among them the French mezzo-soprano Clémentine Margaine as jealous Eboli, a rival for Don Carlos’ love. Her entrance aria, the “Chanson du Voile” about a young woman’s flirtation with a king, seemed a little tentative on opening night, but her delivery of Eboli’s “O don fatal” was truly exceptional for its rage and self-loathing, with the pyrotechnics of a thunderstorm. 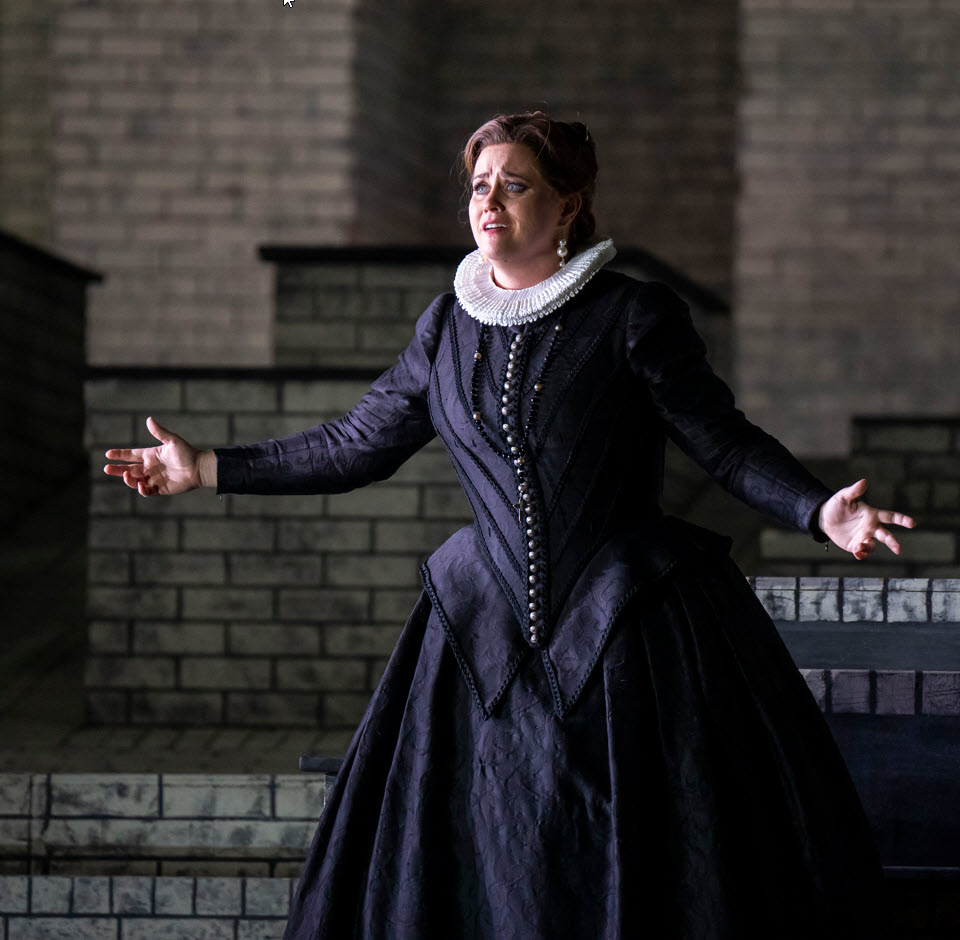 Princess Elisabeth of France (Rachel Willis-Sørensen) is in love with Spanish prince Carlos, but a peace treaty between the French and Spanish kings awards her to Carlos’ father instead.

Rachel Willis Sørensen was impressive as the French princess Elisabeth, destined to wed the Spanish king, instead of his son whom she loves. The American soprano is a smart musician with a statuesque presence and a voice capable of silvery delicacy as well as considerable dramatic heft. Bring Sørensen back for Mozart anytime. Elisabeth deserves a happier ending, of course. Sopranos do get them upon occasion; just not here. We come upon her in Act 1, in the woods at Fontainebleau; she is lost but put back on course by a helpful stranger, of whom she inquires about this Spanish prince she’s expecting to marry.

The stranger is, of course, the very Prince Carlos himself (ardent tenor Joshua Guerrero), and romance blossoms in a sweet duet, but all is interrupted in the very next moment by the devastating news that she will be marrying Carlos’ father, King Philippe II, instead. (Elisabeth was offered as the clincher in a peace treaty between the nations. The scene itself is often cut because of the length of the opera. Verdi worked on many alternatives over the years.) The chance to hear this love-at-first-sight scene, and its sudden reversal, is one of the treats this production provides. 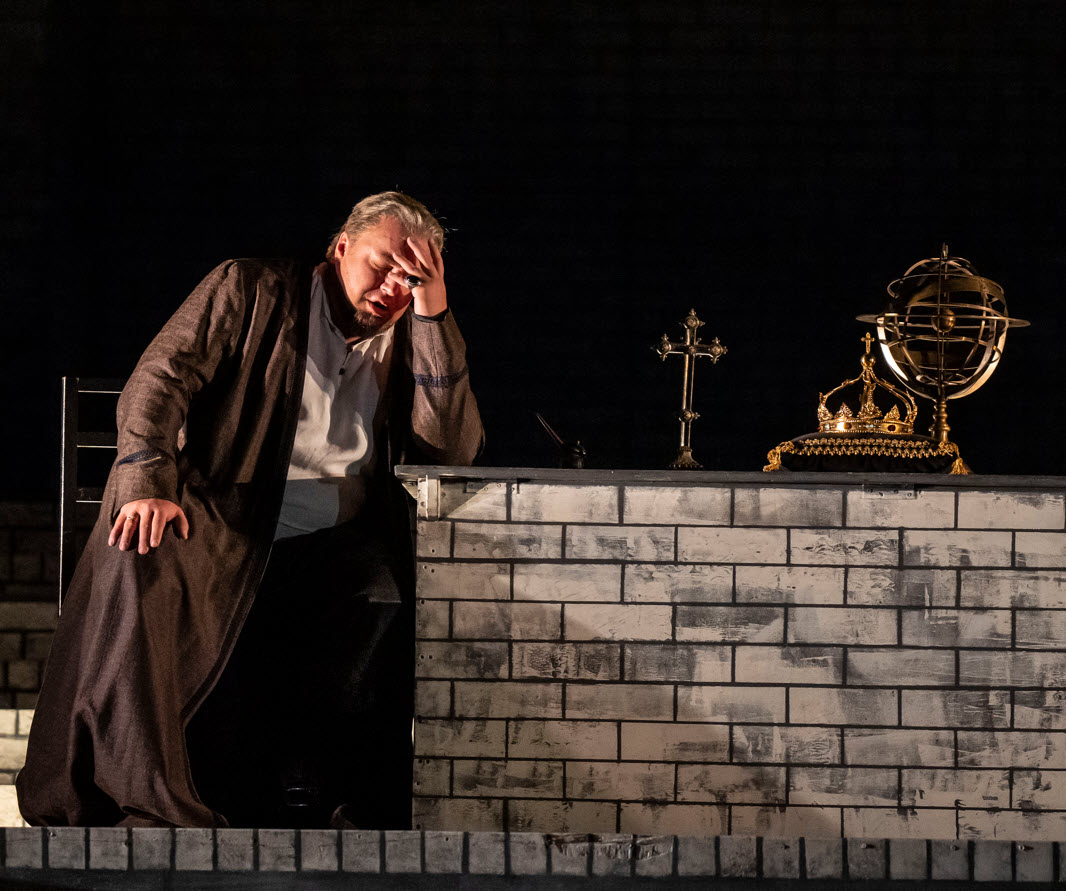 The best scene in the show, for dramatic depth and emerging suspense, begins with the private soliloquy of King Phillippe, Don Carlos’ father, in his private quarters, brooding over the reality that his young wife doesn’t love him. This may seem ridiculous, given that Elisabeth’s marriage to him was forced – until you hear the magic that Verdi does with it. The music begins with a mournful cello solo (beautifully played by Calum Cook), and then the King (richly introspective bass Dmitri Belosselskiy) reveals himself as a prisoner of his own fate (“Elle ne m’aime pas.”). 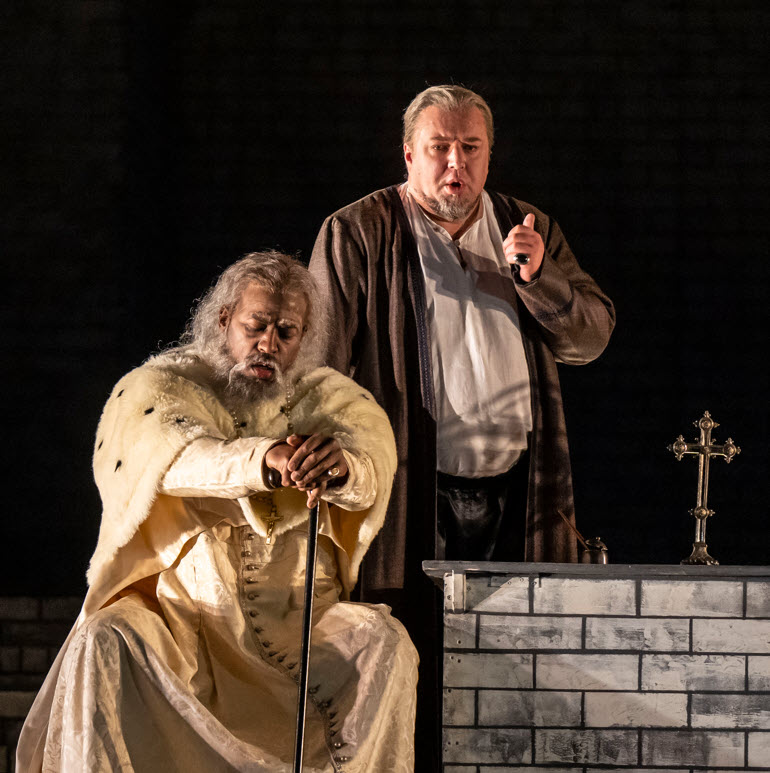 The Grand Inquisitor (bass Soloman Howard) is in favor of a death sentence for King Philippe’s son. The king is left to muse whether the throne must always yield to the altar.

Following his self-indulgent remorse, and in a turn worthy of Shakespeare, the King’s situation gets immediately worse. The Grand Inquisitor appears (the brilliantly ominous bass Soloman Howard). A master of torture who burns heretics, the Inquisitor cynically rationalizes a death verdict for the king’s own son Carlos. The King crumbling to this and other demands foreshadows the tragic potency of Verdi’s “Simon Boccanegra” and “Otello.”

Students of history may note that the fictionalized legend of Don Carlos makes a tragic hero of a hopelessly inbred Spanish prince, who became so increasingly psychotic and unstable that his father sent him to prison, where he soon died. But Verdi himself, following the example of Schiller’s 1787 play, proves there is no question: The legend makes the better story. 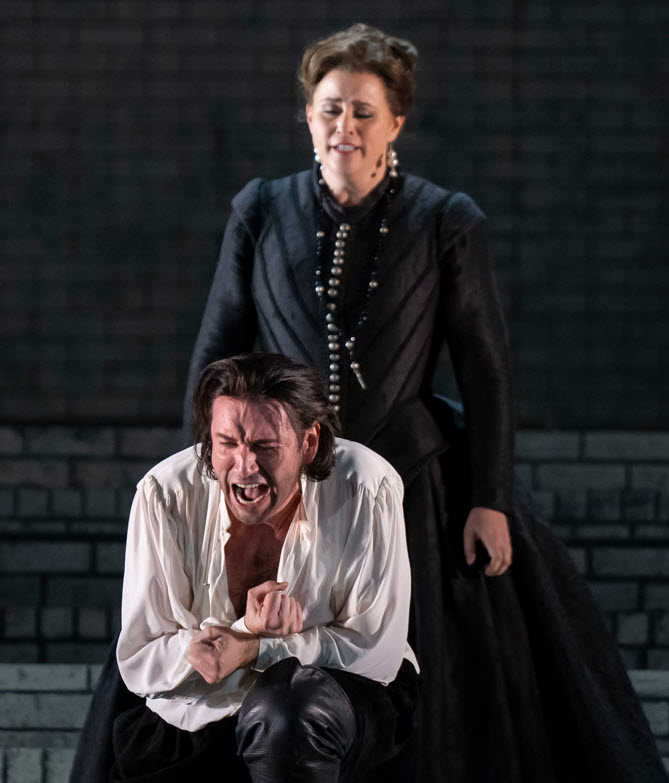 It’s hopeless: Elisabeth, wedded to the King of Spain, is now stepmother to her true love.