Post-pandemic, CSO playing at familiar peak, but audiences have thinned at Orchestra Hall 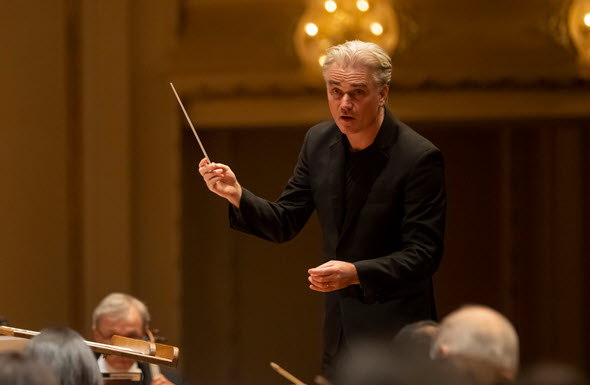 Commentary: As an older crowd hesitates, the mix of artists and programs has left attendance down at Chicago Symphony concerts.

October ended and November began with a sizable qualitative swing in concerts by the Chicago Symphony at Orchestra Hall. What was constant, and troubling, was the sea of empty red seats. Even going back to the beginning of October, when music director Riccardo Muti was on the podium, the house looked light – something that would have been unimaginable pre-pandemic.

One might attribute the fall-off in attendance to the Chicago Symphony’s predominantly older audience and a collective reluctance to venture back into large public gatherings. While the pandemic has waned, the coast is hardly clear. But at the same time, one might wonder whether attendance the last couple of weeks, when the CSO audiences looked thin and thinner, also reflected dubious choices in both artists and programming. It’s a conundrum within a paradox: A change is coming in the orchestra’s music directorship, and the current season might be viewed as a yearlong “audition” for Muti’s successor. Wouldn’t that generate excitement? Maybe not, if prospective candidates and repertoire were neither enticing in themselves nor very aggressively promoted to the public. 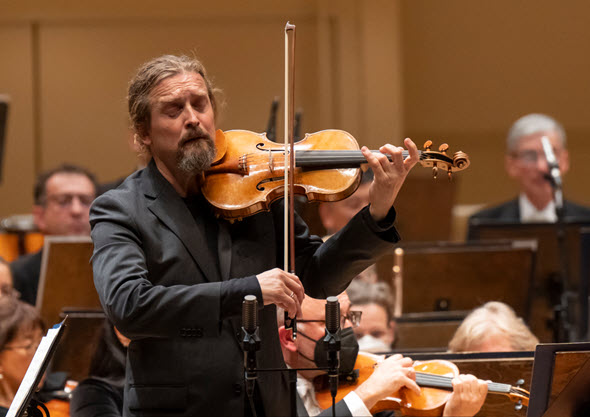 Which brings us to the guest conductors and their programs. The 49-year-old Chinese-American conductor Xian Zhang, music director of the New Jersey Symphony Orchestra, made her first appearance with the CSO in 2009, then returned the next year. But she had not been back in more than a decade, until the weekend of Oct. 27-Nov. 1, when she led concerts with Macedonian pianist Simon Trpčeski.

It was a program that began well, with an ethereal essay by the American composer Nokuthula Ngwenyama, born in Los Angeles of Ndebele-Japanese descent. Her 11-minute “Primal Message” for harp, celesta, percussion and strings parlays fundamental intervals (reflecting prime numbers) into a lyrical interstellar message. It’s beguiling music, and Zhang, who has championed the work widely, led a radiant performance. For this listener, however, that’s where the program’s charm ended. 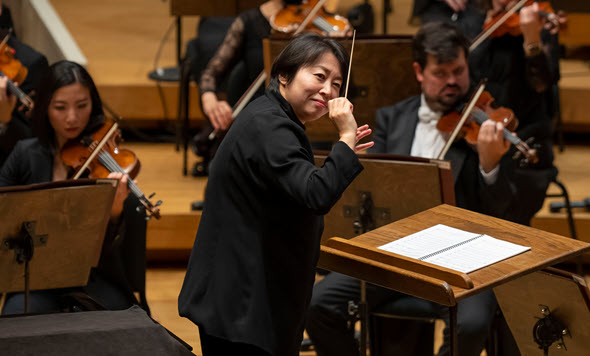 Xian Zhang conducted the CSO in Prokofiev’s Symphony No. 6 in E-flat minor.

Maybe as the pandemic ebbs, the time has come to move on from some of the repertoire of yesteryear. Grieg’s gemütlich Piano Concerto in A minor, Trpčeski’s vehicle on this occasion, seems like a candidate for retirement. Indeed, it sounded quite tired in the hands of Zhang and the pianist, who summoned precious little spark from that mellow warhorse, little bounce or suavité or airiness. His seemingly uninflected playing mostly argued for laying this Victorian opus aside and taking up some excellent concertos that aren’t played much or at all – the Benjamin Britten, the Schoenberg, both Liszt concertos, a couple of those by Saint-Saëns. Trpčeski made a better argument for Grieg with his lilting encore turn through the Waltz in A Minor from “Lyric Pieces.”

No doubt, the matching up of artists and programs has become unusually challenging: Who and what is fresh and yet appealing? How do you coax audiences back into the hall? Perhaps with Prokofiev’s Symphony No. 6 in E-flat minor, the big and brash but seldom heard sequel to his popular Fifth Symphony. A bracing, virtuosic work, it’s right up the Chicago Symphony’s alley. But Zhang is perhaps not its ideal advocate. At the controls of a superlative band that Muti likens to a Ferrari. Zhang “drove” it, to be sure, but not in a good way. From the outset, she over-conducted a brilliantly responsive ensemble as if she were chiseling each phrase. It was exhausting to watch. 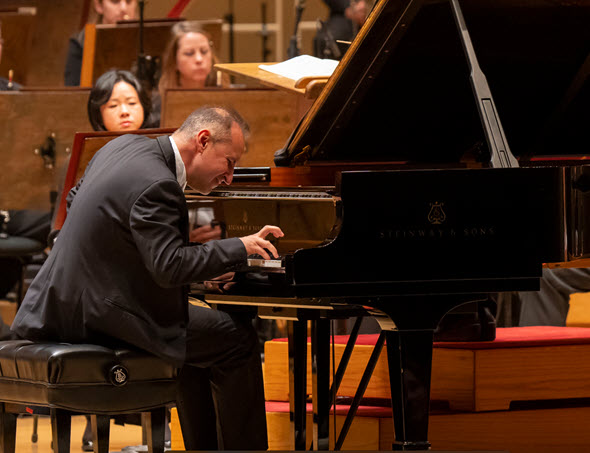 Macedonian pianist Simon Trpčeski was the soloist for Grieg’s Piano Concerto in A minor.

What a striking change was the English conductor Edward Gardner, who came in Nov. 3-5 with violinist Christian Tetzlaff for a program that included Bartók’s Violin Concerto No. 2. That said, however, the 47-year-old Gardner is hardly a household name to American concertgoers (though Tetzlaff is). Here’s where it gets really tricky: Gardner’s centerpiece was the Fifth Symphony of – not Beethoven or Prokofiev or Mahler or Tchaikovsky, Ralph Vaughan Williams. It’s a wonderful work that few music lovers know on this side of the pond, by a first-class composer who is, well, remote and receding. Neither was Bartók’s Violin Concerto, one of the greatest masterpieces of the 20th century, but as gnarly as it is exhilarating, likely to pull in a crowd.

The Vaughan Williams-Bartok pairing, though a marvelous concert, was played to a lamentably small audience. Those who were there were manifestly thrilled – twice, by Tetzlaff’s electric performance abetted by the CSO’s scintillating support under Gardner, and then by a magnificent performance of Vaughan Williams’ imaginative, finely crafted and luxurious Fifth Symphony. Here was conducting of a high order, restrained and purposeful.

How the CSO wins its public back post-Covid is the challenge of artistic planning and the task of marketing. As we edge our way out from these shadowed times, it’s pretty clear the Chicago Symphony organization needs to think afresh. The product itself is resplendent as ever.