After a dozen years, impact of Riccardo Muti
on CSO can be heard in large ways and small 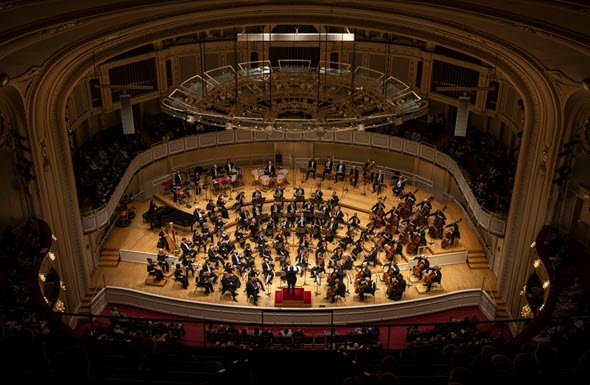 It was a stage-filling Chicago Symphony that played the Prokofiev Fifth. (Todd Rosenberg photos)

An account of the Chicago Symphony Orchestra’s concert Sept. 29 with music director Riccardo Muti could begin at any point in the program of works by Rossini, Mozart and Prokofiev – and the gist would be the same. Whether heard as a display of musical elegance, style and wit or as an exercise in sheer sonorous splendor, the whole effect, front to back, was spectacular. No soloist. None needed. The purely orchestral exhibition spoke volumes about why this orchestra led by this conductor is very special.

Muti has entered his 13th and final season as the Chicago Symphony’s music director. It’s probably accurate to say that, by now, the music lovers who fill Orchestra Hall whenever the 81-year-old Italian maestro is on the podium have come to expect just the sort of thrilling experience served up on this occasion. They have seldom been disappointed. Yet even by a standard taken for granted in Chicago, the concert at hand was quite something: a veritable catalog of the qualities Muti has spent the last dozen years inculcating in this band of virtuosi.

It was a small version of the CSO that occupied the stage for the program’s first half – the Overture to Rossini’s opera “Il viaggio a Reims” (The Journey to Reims) and Mozart’s Symphony No. 39 in E-flat. The balance of the evening was filled, and the stage as well, by Prokofiev’s Symphony No. 5 in B-flat. Magnificent, even electrifying, as the Prokofiev proved to be, the precision and vivacity, the sheer stylistic elan that Muti and the chamber-scaled CSO brought to Rossini and Mozart would have sent this listener out into the night feeling wholly rewarded. 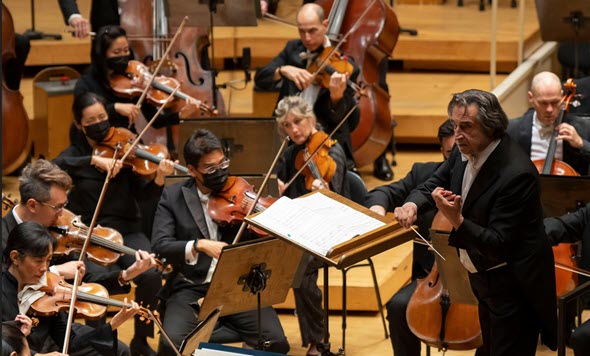 Under Muti’s direction, large works and small had the precision of chamber music.

As the CSO’s program annotator, Phillip Huscher, observes in the program book, calling the “overture” to “It viaggio a Reims” by that name is, well, simply wrong. Apparently, there never was an overture to that largely lost opera, and indeed the provenance of the delicious little piece that has come to be called the overture is itself uncertain. In any case, the music was published in Milan in 1938 as the Gran sinfonia to “Il viaggio,” and no less a figure than Richard Strauss conducted the piece, in 1938, by that name. That it was composed by Rossini seems certain; to hear it removes any possible doubt.

In its sly understatement, clever orchestration, surprising turns and general effervescence, this “overture” smacks resonantly of the composer whose certified overtures are known and treasured: the likes of “The Barber of Seville,” “The Thieving Magpie,” “The Lone Ranger” – oh, I mean “William Tell.” Muti led a lighter-than-air performance, vivacious and witty, almost off-handed in its precision and shapely perfection.

Mozart’s 39th Symphony is one of his three last works in the form, all composed in the summer of 1788, three years before his death at age 35. Somehow, this wondrous symphony has become the outlier, the neglected sister, less celebrated and less often performed than the dark Symphony No. 40 in G minor or the grand “Jupiter” Symphony (No. 41 in C major). I’ve always regarded the 39th Symphony, with its marvelously inventive wind writing and scintillating finale, as the absolute peer of its siblings.

Muti and the CSO put all its best qualities on parade, starting with the slow, densely chromatic opening that puts one in mind of the similar first flourish of Mozart’s earlier String Quartet in C major, K. 465 (“Dissonance”). Mozart surely was honoring Haydn’s habit of using slow a introduction to an opening allegro, but Haydn never began in such turbulent waters as Mozart did in this symphony. Opera is never far from any music by Mozart’s hand, and Muti the devout opera maestro never lost sight of the singing lines that course through the 39th Symphony. Nor were the work’s rich textures ever less than transparent. The crisp tempos felt as natural as breathing, and this compact version of the CSO delivered a performance of sparkling poise and disarming beauty.

If Prokofiev’s more grandiose Fifth Symphony (1944) bespeaks a different time and a different world, its greater scope and forces are scarcely deployed with less concision or finesse. Like a dutiful Soviet artist, Prokofiev spoke of his symphony’s celebration of the people’s spirit, but no such populist – or political – program is needed to sense the almost verbal affirmation of a work so exuberant and engaging. Muti’s take on the four-movement, 48-minute symphony was characteristic: meticulous in his attention to details of structure, rhythm and voicing, ever conscious of the lyricism that underpins everything.

The scherzo, which comes second, is perhaps the work’s signature movement: After its buoyant middle episode, the scherzo’s first part reclaims its place by slow degrees, steadily rising to top speed, like a locomotive pulling its string of cars out of the station. It’s a droll expression of the machine age, and Muti played it out with a clear eye (and ear) for the amusement beneath the tension. And what a turn by the CSO, cranking the music up to full throttle like some outsized chamber ensemble. We might have been back in the concert’s first half, with Rossini and Mozart. 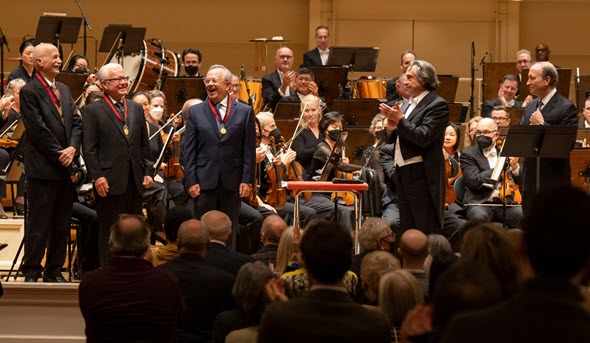 Prokofiev’s blazing, virtuosic finale was the last word, indeed. The big band onstage included five percussionists in addition to timpani, and the band rocked. This closing romp is so like the finale of Prokofiev’s Third Piano Concerto, where you almost don’t want to breathe lest you miss some detail. Muti led a pyrotechnical shower that glittered and surged, only to end suddenly, as if disappearing into its own brilliance.

At intermission, the Chicago Symphony honored three of its members who are retiring: assistant principal oboe Michael Henoch, a member of the orchestra since 1972; bassoonist Dennis Michel, who joined the orchestra in 1998, and violinist Paul Phillips, Jr., a member since 1980. CSO president Jeff Alexander introduced each honoree, and Muti presented each with the Theodore Thomas Medallion for Distinguished Service. Violinist Fox Fehlng, who joined the CSO in 1979, was not present but also will receive the Theodore Thomas award.