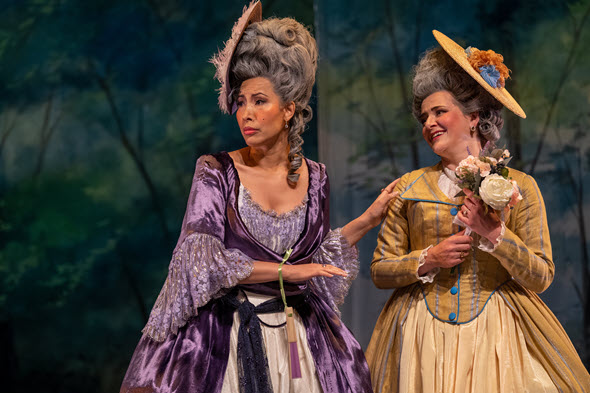 Several years ago, I had the opportunity to experience an opera in the small jewel of a theater at Versailles, just outside Paris. I thought of that night, that intimacy and exoticism, as I watched Haymarket Opera Company’s delightful production of “L’Amant anonyme” in the perfectly proportioned Jarvis Opera Hall that has become its new home at DePaul University. Not so ornate as Versailles perhaps, no cozy little boxes here from which to view the proceedings. But I suspect Joseph Bologne, Chevalier de Saint-Georges, would have felt right at home in the DePaul venue, and I have no doubt he would have relished revisiting his opera “L’Amant anonyme” – sung, and spoken, in such excellent French that he might have thought himself transported back to that time and place. 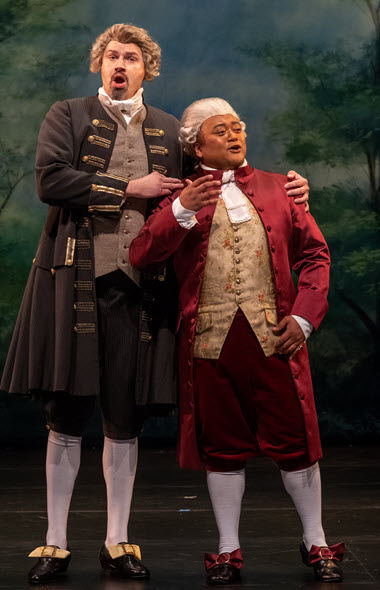 “L’Amant anonyme” (the anonymous lover) has become perhaps the most famous opera no one knows. Indeed, it has come down to us as the signature work by a composer known far better by name and circumstance than by his music. Now, those who enjoyed the sold-out run of Haymarket’s splendid and roundly stylish show have a better sense of both Bologne and his characteristic 18th-century romantic comedy. Top to bottom, Haymarket’s enterprise reflected the company’s dedication to historical accuracy, spirit, one might even say accent.

Distinguished, equally it seems, as composer, violinist and fencer, Bologne (1745-99) was born in Guadeloupe, the son of a French aristocrat and an African slave. He rose swiftly in Paris society to become the toast of the City of Light in multiple facets. Bologne, who was 11 years older than Mozart, may have met the prodigious young Austrian composer during one of Mozart’s excursions to Paris. Comparisons are sometimes made between the two composers, but “L’Amant anonyme” doesn’t suggest the forward-looking style and general aesthetic of Mozart as much as it recalls Haydn and a musical fashion in transition from the Baroque era.

Indeed, Bologne’s opera is a light diversion, a wacky, effervescent upper-class comedy buoyed on some fabulous writing for the voice — notably for the object of the anonymous lover’s affection, Léontine, sung not only gloriously but also appealingly in a star turn by soprano Nicole Cabell. While the role doesn’t quite expand into the vocal fireworks of bel canto, it embraces a considerable range and demands great technical agility. Cabell seemed to be having fun with Léontine’s nagging curiosity about the authorship of these new love notes – these billets-doux – and her careening emotional responses. 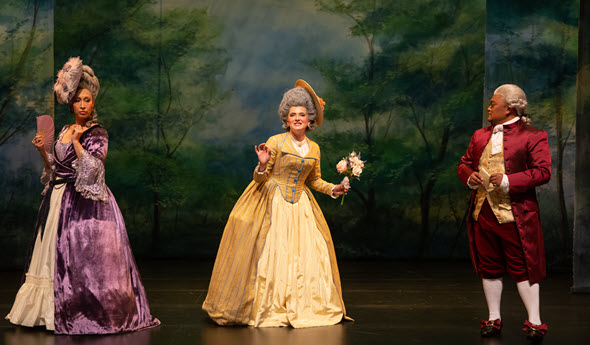 Costumes and hand-painted scenic drops were inspired by Fragonard’s masterpiece “The Swing.”

The pining unsigned lover is none other than Léontine’s dear friend and confidant, the ever-present Valcour. Tenor Geoffrey Agpalo brought as much finesse as ardor to a vocal part hardly less demanding than that of Leontine herself. Vocally and comedically, Cabell and Agpalo made a charming pair: she consulting with him about what to do next and he knowing all but able to say nothing. Rounding out the lead trio, in another solid vocal performance, was bass-baritone David Govertsen as Valcour’s trusty companion and co-conspirator Ophémon. To sweeten this beguiling bouquet, Bologne also included three more bright voices – a lady friend of Léontine and a young couple, all cheerfully and stylishly portrayed by sopranos Nathalie Colas and Erica Schuller and tenor Michael St. Peter.

While “L’Amant anonyme” requires accomplished singers, it also requires of them some polished rhetorical facility – in French. The singing is regularly interrupted by long stretches of dialogue, and the French delivered by these speakers was consistently, astonishingly authentic, not only in pronunciation but also in cadence and inflection. This could have been a Paris night at the Comédie-Française. It was marvelous. So was the physical interaction, its stylized mannerisms given fluency by the unfussy work of director-choreographer Sarah Edgar. 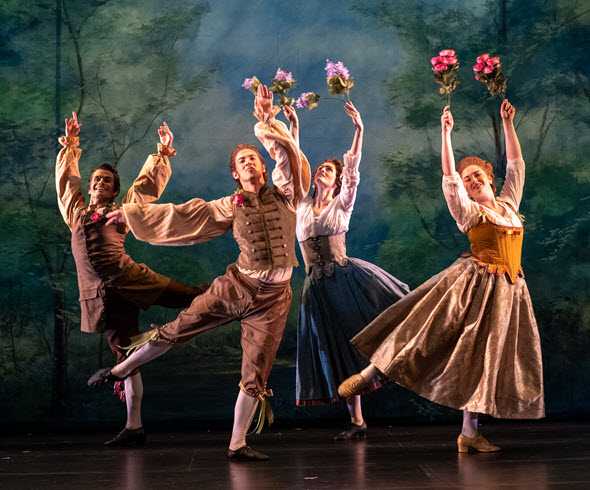 As choreographer, Edgar created the several contredanses – or country dances – that punctuated the opera and, indeed, at the end quite took it over. While the music for those dances was from Bologne’s hand, it was not from the original score. Historically, ballet has been fundamental to French opera, so it was quite right to incorporate dance here. Though I found the contredanse music to be generally the least imaginative of the opera, the final numbers showed some flair. I thought those might have been the work of Mozart or, even more plausibly, his father Leopold, but I was assured it was all by Bologne’s hand.

Kudos as well for the grand costumes created by Stephanie Cluggish and the expansive hand-painted set drops conceived by Wendy Waszut-Barrett after the look of Fragonard’s famous Rococo painting “The Swing.” The ambience was very much Versailles come to Chicago.

From conception to splendid success, this bravura project was guided by Haymarket’s musical leader, Craig Trompeter, who conducted an expert band playing on 18th-century instruments from a deep orchestra pit in front of the stage. It all left one keenly anticipating the company’s next production, Monteverdi’s “L’incoronazione di Poppea” Sept. 22-25, again at Jarvis Opera Hall. 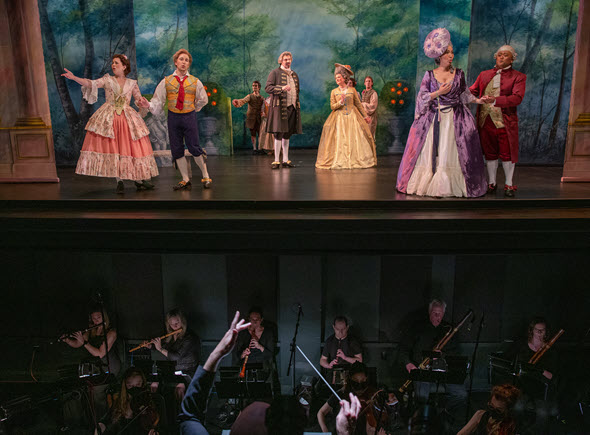 Conductor Craig Trompeter leads onstage singers and an orchestra in the pit at Jarvis Opera Hall.