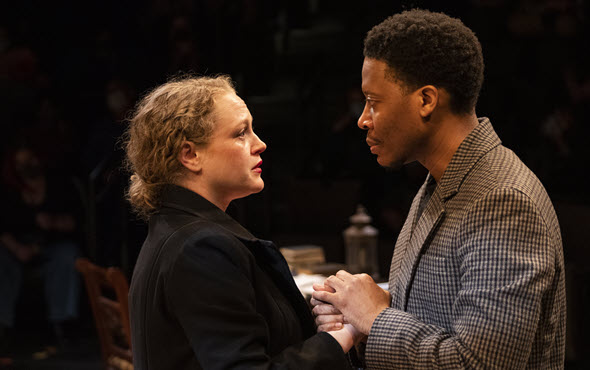 Fortune is not kind to either Nina (Caroline Neff) or Konstantin (Namir Smallwood).
(Photos by Michael Brosilow)

Perhaps any English translation of Chekhov’s “The Seagull” could be construed as an adaptation, much the way some experts in early music regard any performance of Bach on modern instruments as an arrangement. There has been a steady stream of English renderings of “The Seagull” since the comedy – Chekhov’s own term – first saw light in 1896. Now Steppenwolf Theatre adds to that catalog with an adaptation created by ensemble member Yasen Peyankov, the opening flourish for the company’s splendid new in-the-round Ensemble Theater in its grand new building next door to the old one on North Halsted.

I came away from this “Seagull” – Peyankov has dropped “The” – with mixed impressions from every perspective. What I witnessed on opening night, May 7, was an uneasy ensemble of actors somewhat adrift on the surround stage, delivering generally stilted dialogue amid a halting dramatic progression. Peyankov directed. 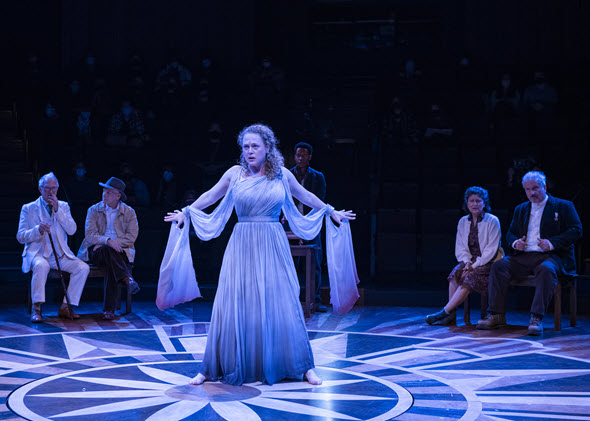 To be sure, it was not funny. “The Seagull” never was funny. That idea escaped the playwright’s grasp as soon as audiences watched the vainglorious stage star Irina Arkadina venomously berate her aspiring playwright son, who certainly does not have the last laugh. What’s engaging about this version is neither the petulant, posturing Arkadina (Lusia Strus) nor her pathetic son Konstantin (Namir Smallwood), but rather the title character of Peyankov’s treatment, the lovely young Nina, the delusional wannabe actress who in the psychological extremity of her failure identifies with a fallen seagull, even calling herself by that name.

Caroline Neff, a veteran of many Chicago stages, offers a finely contoured perspective on Nina, girlfriend of the young playwright Konstantin and eager actress in the off-beat, futuristic monodrama he has written for the family gathering at his uncle’s country home. Perhaps Chekhov thought his send-up of avant-garde theater would provide “The Seagull” with a tone-setting comedic element; little could he have anticipated that audiences in 2022 would take quite seriously Nina’s personification of the earth, the elements, the cosmos, time itself. 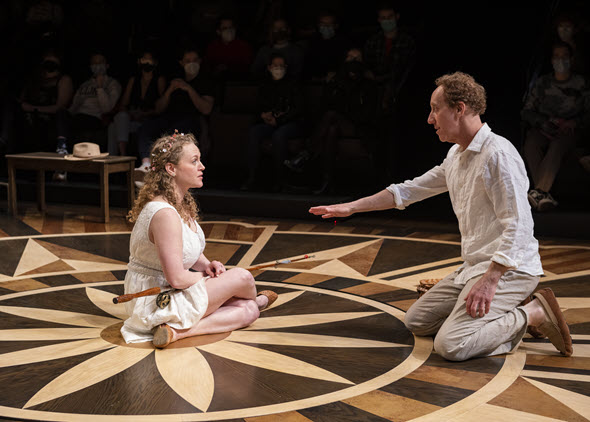 Peyankov’s ambitious staging of Konstantin’s play within the play is eye-popping in a Ringling Bros. sort of way, a brash opening statement of what Steppenwolf’s new space will allow. But it’s also beyond improbable as a device available in Chekhov’s setting, which is not just rural but specifically outdoors.

Aside from that fanciful indulgence, designer Todd Rosenthal’s sets make efficient use of the arena, an oval surrounded by 400 seats that rise only six rows. No viewer is very far from the action. The Ensemble Theater strikes me as a more intimate version of Washington’s Arena Stage. It’s potential is limitless. That said, this first venture left much to be wished for. I sat at one end, where some key scenes were played. I seriously wondered whether dialogue was clearly discernible to patrons seated at the opposite end – because I sometimes had difiiculty hearing speeches that were distant from me. Arena stages present a learning curve; it will get better. 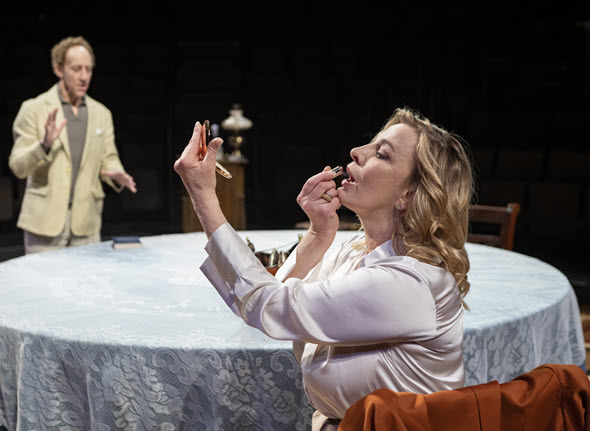 With every gesture, Irina Arkadina telegraphs that “It’s all about me!”

“Seagull” presented a complex opening gambit, and what I saw wasn’t working on a very deep level. I missed the electricity of engagement: spontaneity, an esprit of mutual familiarity, a sense of driving energy. The haughty, self-absorbed celebrity actress Arkadina arrives with her lap dog lover, the likewise lionized writer Trigorin (Joey Slotnick). While Strus paints Arkadina’s patrician self-importance in broad strokes, Slotnick shows us an obsessive-compulsive writer with almost no personality at all. He’s not interesting, and yet we are to believe that the impressionable Nina falls for him so completely that she would ruin her life in worship at his altar.

Arkadina’s long-suffering son Konstantin is a formidably challenging and yet easily underestimated role. He’s the modestly talented son of a superstar who treats him shabbily, at best capriciously. Arkadina never lets Konstantin forget that she is great and he never will be. They have their good moments, but those are fleeting and readily turn to pitched battles of vitriol. Smallwood’s Konstantin is a sympathetic character, as frustrated as he is needy. His best scene comes near the end, when Nina, by now defeated and bedraggled, shows up at his door. 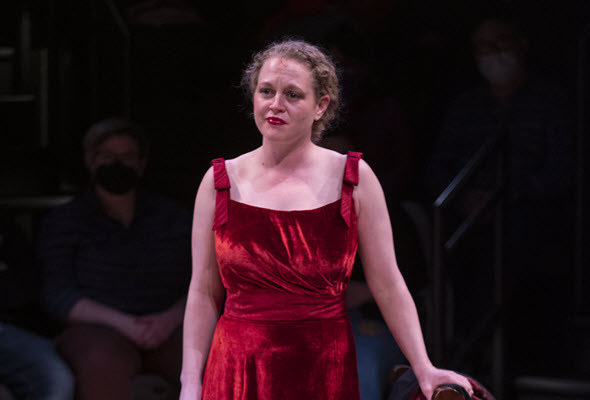 Acting career and love life have both hit bottom for Nina (Neff).

In that crucial scene, Konstantin has comparatively little to say. It is Nina’s turn. But listening is a dramatic skill, too, and Smallwood is a fully connected listener, as helpless as he is stunned by Nina’s evident descent to the bourn of madness. Here, Neff raises the entire production to a memorable level. Her sad narrative, which blows in and out of rationality, wells up from a deep and awful place. it is a monologue not just of speech and idea but of core feeling, essence.

So much else about this “Seagull” felt like borrowed robes: actors reading often unconversational lines, strutting about the stage with gaits suitable to their ages, portraying rather than becoming. Keith Kupferer and Sandra Marquez are notable exceptions as the married couple Ilya and Polina, manager’s of the estate, Kupferer a lusty and embracing presence, Marquez marvelously eye-catching in her contained self-assurance.

A word probably should be added about the bird itself, the seagull in the play. Konstanin shoots it and presents the corpse to Nina as a gift. It is, of course, like any dead bird you might find on the street – stiff, pancake flat and repugnant. When the famous Trigorin, Nina’s new heartthrob, comes into view, she hastily and quite awkwardly pushes the expired gull under a bench – a comic bit that actually got a laugh.